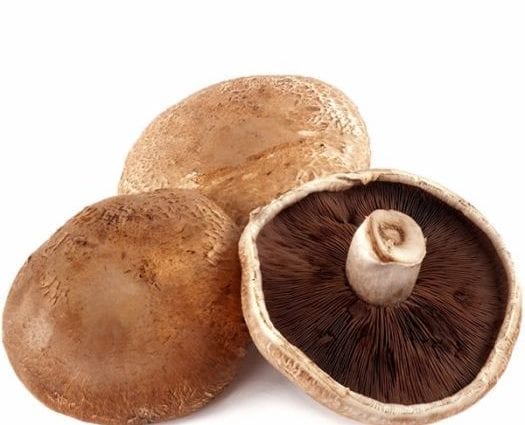 Portobello is a kind of champignon, a rather large mushroom, when its cap is fully open, it reaches a diameter of 15 cm. Thanks to the fully opened cap, moisture from the portobello mushroom evaporates more than from any other mushrooms, therefore their structure is dense and fleshy. and when cooked, they turn out to be very aromatic.

Portebello is the most exquisite type of mushroom used in all European cuisines. Portobello is one of the tastiest and easiest mushrooms to prepare. These mushrooms are salted, pickled, fried on the grill and in a pan, stewed in sour cream and sauces, added to salads, stews, omelets and pizza.

History and distribution of Portobello mushroom

In nature, Portobello grows in unsightly conditions: along roads, in pastures and even in cemeteries. The name “Portobello” appeared in the 1980s with the aim of popularizing this type of mushroom. Previously, these mushrooms were not used in cooking and were often simply thrown away. Portobello is now one of the most popular mushrooms used in Israeli and European cuisine.

Portobello mushrooms are quite rare, so you can buy them in gourmet stores and in some supermarkets.

When preparing soups, broths and sauces, the legs of the portebello mushroom are removed as they are very fibrous and dense. Mushroom caps are used in the same way as other mushrooms: cut or leave intact. Whole caps are best for baking.

The longer the portobello mushroom is cooked, the denser it will be and the more meaty smell will be. Little secret: for the best taste when cooking these mushrooms, do not wash them, but scrape off any contamination with a knife.

Like other types of mushrooms, portobello is very nutritious and high in calories. It is sometimes called “vegetarian meat” due to its high protein content and its rich meat smell. This mushroom contains many vitamins and trace elements such as copper and selenium.

Eating this mushroom contributes to the natural elimination of salts of heavy metals from the body, therefore, these mushrooms are often eaten almost raw, dipped in lemon sauce.

Portobello mushrooms are considered a heavy food due to their high protein content.

For how long to boil portobello

Cook Portobello in salted water for about 15 minutes.

In Irish Dublin there is the Portobello district, and in London there is a flea market of the same name. Are they somehow related to the portobello mushroom, which most resembles brown champignon?

No way. By kinship, Portobello is indeed a kind of champignons, of which almost 90 different species are known. But Portobello is a premium subspecies among them. Previously, it was called differently: crimino.

There is a legend that everyone recognizes and tells each other that large criminos, in addition to being difficult to transport, also sold poorly, and some merchant had to come up with a new name for them, and then re-enter the market with the goods. As you can see, he succeeded. So Portobello is a mushroom with good PR. He is loved not only in Europe, but also in Israel.

Why is portobello considered an elite mushroom today and is 4-5 times more expensive than champignon?

Due to its properties, composition, size. Portobello does not grow for a month, like a champignon, but for two or three. Cut off only those mushrooms whose cap is fully opened. In champignon, on the contrary, it is considered valuable to preserve the roundness of the cap, and openness is a sign of overripe.

Meanwhile, the open cap, fibrous underneath, helps the portobello to get rid of moisture, which is why their taste is very powerful, either mushroom or meat, and the smell of earth is very strong. The brown cap reaches 20 cm in diameter, weighs up to 200 g. Portobello is rich in potassium and protein and is very satisfying.

Where did he come from and where can you buy good Portobellos now?

It started up in Italy, but the French quickly transplanted it onto their soil. It was there that he began to be cultivated on an industrial scale.

How to make sure the portobello on the counter is really good?

Look carefully at the hat: there should be no wrinkles on it. Poke your finger into the mushroom, if it is dense, you can take it. When bought and brought home – it is best to store in a paper bag in the refrigerator, but not more than two days. Many people wash mushrooms and portobello under the tap. This is mistake.

Mushrooms like champignons, including portobello, instantly start drinking water. Even for five seconds, lower it under the tap – the cut will show how the fibers have darkened. So it’s better to just wipe them with a damp cloth before cooking, before that, let them be stored in the form in which they were cut.

Is if safe to eat portobello raw?

They eat, but not with us. They are still slowly getting used to raw mushrooms. But both champignons and portobello are actually sterile mushrooms. Naturally, they can be eaten without any processing. For example, simply sprinkle with olive oil or balsamic.

Well, or we chop the tomato concasse, cut the avocado, shallots, add arugula, a little chili pepper, bell pepper, parmesan and portobello slices … But the taste of this mushroom is most fully manifested when frying – in a pan or grill.

Will these mushrooms take away a lot of oil from the pan?

That’s exactly what they’ll take! Only after that you do not need to add more, as everyone usually does. Portobello is like an eggplant when frying. First he takes it, then – just wait a little – he gives it back. It is important to remember that you only need to fry the caps, and turn them caps down to “close” the mushroom juice inside.

Most often portobello is stuffed?

Yes. You can stuff anything. I suggest putting riccotta, philanthus cheese, fresh rosemary and thyme into the fried hats. And put it in the oven for a while – until the cheese is covered with a crust. Then you can get it. Serve on arugula, which pairs best with portobello.

What other mushrooms can Portobello be used with?

If we need a very fragrant mushroom sauce or a rich mushroom soup, take the powerful portobello and dominant porcini mushrooms. But more often Portobello is associated with neutral mushrooms or even mushrooms.

And what does the universal mushroom not combine with under any circumstances?

With white fish and tomato sauce. The latter will not add anything to Portobello, it will remain a sour tomato. And we just can’t imagine white fish with powerful mushrooms, and it’s no use …

When choosing Portobello mushrooms, you should pay attention to the preservation and uniformity of the surface color, preferring mushrooms without any defects.

Fresh Portobello mushrooms must be stored in the refrigerator and eaten within 3-7 days. In this case, it is recommended to place the mushrooms in a paper bag, after wrapping each of them in a damp paper towel or cloth.

In addition, Portobello mushrooms can be frozen. Subject to the temperature regime (not higher than minus 18 degrees Celsius), they can be stored in this form for 6-12 months.