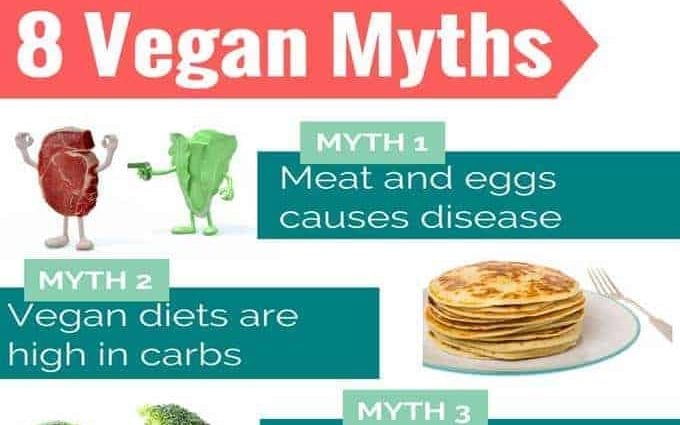 During its existence, and this is more than one century, the vegetarian diet has overgrown with many myths, both about its benefits and about harm. Today they are retold by like-minded people, manufacturers of various food foods use in their advertising campaigns, but what is there – sometimes they just make money on them. But few people know that almost all of them are dispelled thanks to elementary logic and the slightest knowledge of biology and biochemistry. Don’t believe me? See for yourself.

Myths about the benefits of vegetarianism

The human digestive system is not designed to digest meat.

Scientists have been arguing for decades about who we really are – herbivores or predators? Moreover, their arguments are mostly based on comparing the size of the intestines of humans and different animals. We have it as long as a sheep or a deer. And the same tigers or lions have a short one. Hence the conclusion – that they have it and it is better adapted for meat. Simply because it passes through it faster, without lingering anywhere or decomposing, which, of course, cannot be said about our intestines.

But in reality, all these arguments are not supported by science. Nutritionists agree that our intestines are longer than the intestines of predators, but at the same time insist that if a person does not have digestive problems, he digests meat dishes perfectly. He has everything for this: in the stomach – hydrochloric acid, and in the duodenum – enzymes. Thus, they only reach the small intestine, so there can be no question of any lingering and rotting food here. It’s another matter if there are problems, for example, gastritis with low acidity. But in this case, in place of a poorly processed piece of meat, there may be a piece of bread or some kind of fruit. Therefore, this myth has nothing to do with reality, but the truth is that man is omnivorous.

Meat can be processed and even rot in the stomach for up to 36 hours, while taking away from a person his energy

Continuation of the previous myth, which is refuted by science. The fact is that the concentration of hydrochloric acid in the stomach simply goes off scale, so nothing can be digested for a long time and, even more so, nothing can rot in it. The only bacteria that can endure such dire conditions is Helicobacter pylori… But it has nothing to do with the processes of decomposition and decay.

A vegetarian diet is healthier

Of course, a well-thought-out diet, in which there is a place for foods containing all macro- and micronutrients, helps to reduce the risk of developing cardiovascular diseases, sugar, cancer and others. But, firstly, in reality, not everyone adheres to it. And, secondly, there is also scientific research (Health Food Shoppers Study, EPIC-Oxford) proving the opposite. For example, in Britain it was found that meat eaters are less likely to develop cancer of the brain, cervix and rectum, compared with vegetarians.

🚀More on topic:  Reasons to become a vegetarian

This myth was born, most likely, when it was proved that vegetarianism helps prevent certain diseases. But the most interesting thing is that no one has confirmed statistical data on the life of people with different diets. And if you remember that in India – the homeland of vegetarianism – people live on average up to 63 years, and in Scandinavian countries, where it is difficult to imagine a day without meat and fatty fish – up to 75 years, the opposite comes to mind.

Studies have shown that vegetarians have lower rates than meat eaters. But do not forget that this indicator may indicate not only the absence of subcutaneous fat, but also the lack of muscle mass. In addition, a vegetarian diet matters.

It’s not a secret for anyone that it is very difficult to compose it correctly, having achieved the optimal ratio of macronutrients and the minimum calorie content of dishes, especially in our country, where fruits and vegetables do not grow all year round. So you have to replace them with other foods or increase the portions eaten. But the grains themselves are high in calories, olive oil is heavier than butter, and the same bananas or grapes are too sweet. Thus, refusing completely from meat and from the fat that is in it, a person may simply be disappointed. And do not throw off a couple of extra pounds, but, on the contrary, gain them.

Vegetable protein is similar to animal

This myth is refuted by the knowledge gained at school in biology class. The fact is that vegetable protein does not have a complete set of amino acids. In addition, it is less digestible than an animal. And getting it completely from, a person runs the risk of “enriching” his body with phytoestrogens, which negatively affect the hormonal metabolism of men. In addition, a vegetarian diet somewhat restricts the body in some useful substances, such as, which are not found in plants at all, iron, zinc and calcium (if we are talking about vegans).

Summing up all of the above, the question of the benefits of vegetarianism could be considered closed, if not a single “but”. Along with these myths, there are also myths about the dangers of vegetarianism. They also generate controversy and disagreement and often refute the above. And just as successfully dispelled.

Myths about the dangers of vegetarianism

All vegetarians are weak, because the strength comes from meat

Apparently, it was invented by people who have nothing to do with vegetarianism itself. And the proof of this is the achievements. And there are plenty of them – champions, record holders and owners of enviable titles. All of them claim that it was the carbohydrate vegetarian diet that gave their body maximum energy and strength to conquer the sports Olympus. Among them are Bruce Lee, Carl Lewis, Chris Campbell and others.

🚀More on topic:  How to properly switch to vegetarianism

But do not forget that this myth remains only a myth as long as a person who decides to switch to a vegetarian diet carefully plans his diet and makes sure that the required amount of macro- and microelements is supplied to his body.

By giving up meat, vegetarians are protein deficient

What is protein? This is a specific set of amino acids. Of course, it is in meat, but besides it, it is also in plant foods. and spirulina algae contain it in the form in which a person needs it – with all the essential amino acids. With grains (wheat, rice), other types of nuts and legumes, everything is more difficult – they lack 1 or more amino acids. But don’t despair even here! The problem is successfully solved by skillfully combining them. In other words, by mixing cereals and legumes (soybeans, beans, peas,) in one dish, a person gets a full set of amino acids. Notice not eating a single gram of meat.

The above is confirmed by the words from the British Encyclopedia that nuts, legumes, dairy foods and grains contain up to 56% protein, which cannot be said about meat.

Meat eaters are smarter than vegetarians

This myth is based on the generally accepted belief that vegetarians lack phosphorus. After all, they refuse meat, fish, and sometimes milk and eggs. But it turns out that everything is not so scary. After all, this trace element is also found in legumes, nuts, cauliflower, celery, radishes, cucumbers, carrots, wheat, parsley, etc.

And sometimes it is from these foods that it is also absorbed to the maximum. For example, soaking grains and legumes just before cooking. The best proof of this is the footprint on earth left behind by great thinkers, scientists, composers, artists and writers of all times and peoples – Pythagoras, Socrates, Hippocrates, Seneca, Leonardo da Vinci, Leo Tolstoy, Isaac Newton, Schopenhauer and others.

Vegetarianism is a direct path to anemia

This myth was born from the belief that iron enters the body only from meat. But those who are not familiar with biochemical processes believe in it. Indeed, if you look at it, then, in addition to meat, milk and eggs, iron is also contained in peanuts, raisins, zucchini, bananas, cabbage, strawberries, raspberries, olives, tomatoes, pumpkin, apples, dates, lentils, rose hips, asparagus and many other foods.

True, they call him non-heme. This means that in order for it to be assimilated, certain conditions must be created. In our case, eat foods rich in iron at the same time, c. And do not overdo it with drinks that contain caffeine, as they inhibit the absorption of this trace element.

In addition, we must not forget that anemia, or anemia, is also found in meat-eaters. And medicine explains this for the most part psychosomatics – this is when the disease appears as a result of psychological problems. In the case of anemia, it was preceded by pessimism, self-doubt, depression, or overwork. Therefore, rest more, smile more often and you will be healthy!

Vegetarians are deficient in vitamin B12

This myth is believed by those who do not know that it is found not only in meat, fish, eggs and milk, but also in spirulina, etc. And provided there are no problems with the gastrointestinal tract, even in the intestine itself, where it is successfully synthesized, albeit in small quantities.

Apparently, this myth was invented by those who have not heard of the famous vegetarians. Among them: Tom Cruise, Richard Gere, Nicole Kidman, Brigitte Bardot, Brad Pitt, Kate Winslet, Demi Moore, Orlando Bloom, Pamela Anderson, Lyme Vaikule, as well as Alicia Silverstone, who was recognized by the whole world as the sexiest vegetarian.

Nutritionists do not accept a vegetarian diet

Here, in fact, there are still disagreements. Modern medicine is not against a diet that contains all the macro- and microelements necessary for the body. Another thing is that it is quite difficult to think it over to the smallest detail, so not everyone does it. The rest are content with what they have done and, as a result, suffer from a lack of nutrients. Nutritionists do not recognize such amateur performances.

The controversy surrounding this myth continues to this day. Both sides make convincing arguments, but the facts speak for themselves: Alicia Silverstone carried and gave birth to a strong and healthy baby. Uma Thurman, who has been vegetarian since the age of 11, carried and gave birth to two strong and healthy children. Why, the population of India, 80% of which does not eat meat, fish and eggs, is considered one of the most prolific in the world. They take protein from grains, legumes and milk.

Popular wisdom refutes this myth. After all, from time immemorial it was said about a weak person that he ate little porridge. And this is far from the only saying on this score. These words and knowledge of history confirm. Our ancestors ate mostly cereals, wholemeal bread, fruits and vegetables (and they had sauerkraut all year round), mushrooms, berries, nuts, legumes, milk and herbs. Meat was very rare for them simply because they fasted for more than 200 days a year. And at the same time they raised up to 10 children!

As a postscript, I would like to clarify that this is not a complete list of myths about vegetarianism. In fact, there are countless of them. They prove or deny something and sometimes completely contradict each other. But this only proves that this food system is gaining popularity. People are interested in it, they switch to it, they adhere to it, and at the same time they feel absolutely happy. Isn’t that the most important thing?

Believe in yourself and your strength, but do not forget to listen to yourself! And be happy!