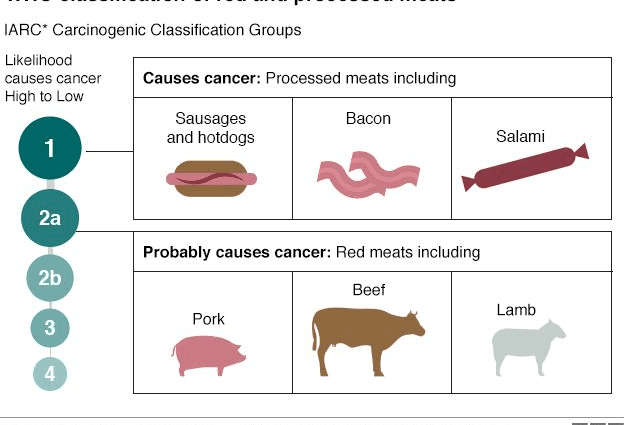 Today in the world there are over 14 million people with cancer, of which more than half die. But this is not the limit, because according to official data, about 10 million people join their ranks annually. A third of them, as a rule, learn about a terrible ailment in the later stages, due to which the likelihood of a complete cure from it is significantly reduced. The disease affects a wide variety of people, including those from developed countries. Most of the patients of oncological dispensaries live in Denmark. Traditionally, breast cancer and colon cancer are in the lead. And if in the case of the former, the worst thing can be prevented by regular examination, in the case of the latter, the rejection of meat. In any case, WHO experts are sure of this.

On October 26, 2015 in Lyon, employees of the World Health Organization issued a sensational statement: red meat and meat products provoke the development of colon cancer, pancreas and prostate cancer in humans.

This announcement was preceded by a colossal amount of work. It was taken over by a group of 22 scientists. All of them are experts from 10 countries, convened on the occasion of the International Agency for Research on Cancer (IARC) Monographs Program.(1)

All of them studied materials obtained in the course of scientific research. There were over 1000 of them (700 for red meat and 400 for meat products). They, one way or another, touched upon the relationship between the amount of food consumed and the incidence of 12 types of cancer. Moreover, the most different countries of the world and residents with different diets were taken into account.(2)

Interestingly, scientists had suspicions of carcinogenicity in meat long before this scientific work. It’s just that in the course of various epidemiological studies, they now and then came across data indicating that the regular presence of red meat in the diet is still associated with a slight increase in the risk of developing certain types of cancer. And even if this risk for an individual is small, it can be huge within an entire nation. After all, meat consumption is steadily increasing even in countries with low and middle living standards.

As a result, at some point at the meeting it was decided to formulate an assessment of the carcinogenicity of meat and meat products, which was taken up by the IARC working group.(3)

According to experts, red meat is all meat, or muscle tissue, from mammals. These include: pork, beef, goat, horse, lamb, lamb.

To assess carcinogenicity, the experts used a table with 4 groups of risks to human health.

Meat products got into 1 group entitled “Carcinogenic to humans“. Interestingly, this group contains everything that definitely leads to the development of cancer, as evidenced by the corresponding results of studies, most often epidemiological. By the way, tobacco and asbestos fell into the same group, but experts answer the question of whether meat is as dangerous to health as the latter substances. They simply claim that everything that falls into the first group contributes to the development of colon cancer and there is strong scientific confirmation of this.

Red meat, in turn, got into group 2A «Probably carcinogenic to humans“. This means that in the course of epidemiological studies, scientists have found that there is a link between the consumption of red meat and the development of cancer cells, but at this stage, due to a lack of evidence, they cannot say for sure about this. In other words, the study will continue.(4,5)

The mechanism of cancer development

Immediately after the announcement of the sensational statement, people began to have questions, one of which related to the mechanism of cancer development.

Researchers are still trying to establish exactly how meat provokes the development of cancer cells, although they already have some assumptions. Most likely, the matter is in the meat itself, more precisely, in the substances that it contains. Red meat is a source of hemoglobin… The latter is a special polymer protein, consisting of a protein part and an iron (heme) part. In the course of complex chemical reactions, it is broken down in the intestine, forming nitro compounds. Such processes damage the intestinal mucosa, as a result of which the replication mechanism is automatically triggered by neighboring cells.

From a scientific point of view, any replication is a huge probability of an error in the DNA of a developing cell and the first step towards cancer. And this despite the fact that meat products may already contain substances that increase the risk of developing cancer cells. The process of cooking meat aggravates the situation. High temperatures from grilling or barbecuing can also contribute to the formation of carcinogens in meat.

At the same time, other versions are also looking for confirmation:

In any case, it’s not just the quality of the meat, it’s the quantity. (5)

Summarizing all of the above, experts focus on the fact that:

For a long time meat-eaters could not agree with such loud statements of the WHO. Meanwhile, Tim Key, a professor of cancer research at the University of Oxford, explained that this report is not a guide to action. Whatever one may say, but meat is a source of valuable substances, including, therefore, no one asks to completely exclude it from your life overnight. At this stage, IARC only recommends revising your diet and reducing the amount of meat and meat products in it. (5)

In turn, representatives of the Union of Meat Producers said that the rejection of the above-described products is unlikely to help prevent cancer, because the true causes of its occurrence are smoking and alcohol. WHO experts agreed, but their research continued.

More than a year has passed since the announcement of the sensational statement. Thanks to that report, some have already changed their lives, deleting meat from it, others have taken the path of correction, and still others have simply taken note of the new information. Time will tell which of them is right. At this stage, I would like to recall the words of Tim Key that a healthy diet in any case is about moderation. And this applies to everything, including meat.(3)