“Tom and Jerry” is a hot alcoholic cocktail with a strength of 12-14% by volume, consisting of rum, raw egg, water, sugar and spices. The peak of the drink’s popularity came at the end of the XNUMXth century, when it was served in England and the USA as the main Christmas cocktail. Nowadays, “Tom and Jerry” is not so relevant because of the simplicity of the composition and somewhat insipid taste, but connoisseurs of egg liqueurs will like it, first of all, as a warming drink.

The Tom and Jerry cocktail is a variation of the Egg Leg, where plain water is used instead of milk or cream.

According to one version, the author of the Tom and Jerry recipe is the legendary bartender Jerry Thomas (1830-1885), who during his lifetime received the unofficial title of “professor” of bar business.

It is believed that the cocktail appeared in 1850, when Thomas worked as a bartender in St. Louis, Missouri. Initially, the cocktail was called “Copenhagen” because of the Danes’ love for hot alcohol with an egg in its composition, but the compatriots considered this name not patriotic and at first called the cocktail the name of its creator – “Jerry Thomas”, which then transformed into “Tom and Jerry”. However, a cocktail with this name and composition appeared in the documents of the trial in Boston in 1827, so it is more plausible that Jerry Thomas only popularized the cocktail, and the real author of the recipe remained unknown and lived in New England (USA).

The Tom and Jerry cocktail has nothing to do with the famous cartoon of the same name, which was first released in 1940 – about a hundred years later.

According to another version, the cocktail is associated with Piers Egan’s novel Life in London, which described the adventures of the capital’s “golden youth” of that time. In 1821, based on the novel, a theatrical production of “Tom and Jerry, or Life in London” appeared, which was successfully staged for several years in Britain and the USA. Supporters of this version are sure that the cocktail is named after the main characters of the novel – Jerry Hawthorne and Corinthian Tom.

The most famous lover of the Tom and Jerry cocktail was the twenty-ninth President of the United States, Warren Harding, who served the drink in honor of Christmas to his friends.

1. Separate the yolk from the white of a chicken egg. Place egg yolk and egg white in separate shakers.

2. Add a teaspoon of sugar or 2 teaspoons of sugar syrup to each shaker.

3. Add spices to the yolk if desired.

4. Shake the contents of the shakers. In the case of protein, you should get a thick foam.

5. Add rum to the yolks, then beat again and gradually pour in hot water.

Attention! Water should not be boiling water and it must be added gradually and mixed – first in a spoonful, then in a thin stream so that the yolk does not boil. The result should be a homogeneous liquid without lumps.

6. Shake the yolk mixture again in a shaker and pour into a tall glass or glass cup for serving.

7. Put the protein foam on top with a spoon, trying not to mix. 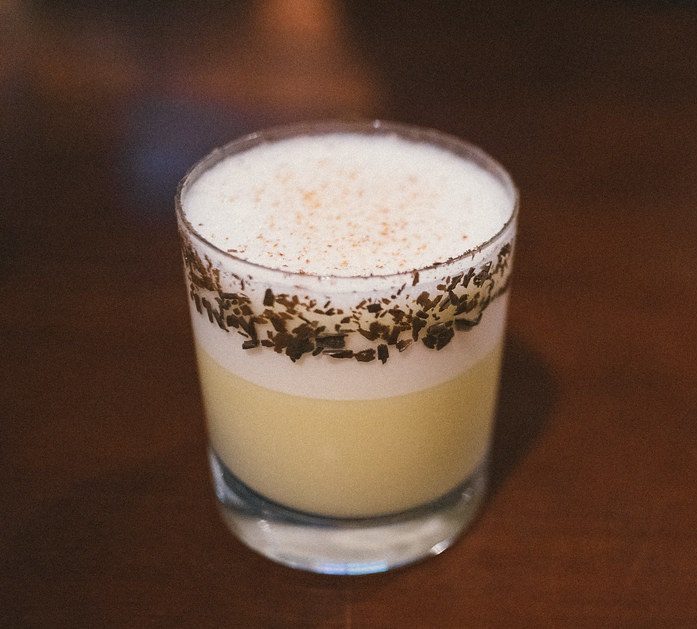