Roasting over an open fire 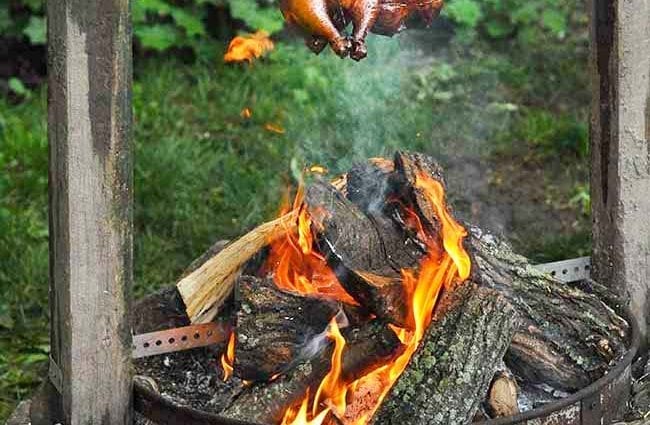 Who among us does not like to sit by the fire, listen to songs with a guitar, and maybe even fry mushrooms, freshly caught fish or quail over the fire. It is about this method of cooking that we will talk.

This method arose back in those distant times, when people dressed in skins, and there was no talk of the existence of pans. Then everything was eaten raw, from vegetables to meat and fish.

And so, one fine evening, when the tribe gathered around the fire, one of the boys, playing with food, strung it on a stick and placed it over the fire. And even if the stick was charred in some places, and the products did not have the taste that can be given to them using all modern knowledge about frying, but this was a very valuable discovery for that time.

Now, not sticks are used for frying over an open fire, but metal knitting needles called skewers. It is on them that kebabs are fried.

In order for the kebab to be juicy and have good taste, the meat used to make it should not be burnt. In addition, in order for the juice to remain inside, first the meat is subjected to strong heating, and then switched to low heat. This is done by partially flooding the fire with water. As for the kebabs, instead of water, red wine is used, which gives the meat a unique taste and aroma. During frying, you must periodically turn the skewer over so that the meat is cooked evenly. In the old days, when meat was not so expensive and the game was carried out apparently invisibly, frying on a spit was used. This is the same frying as on a skewer, only instead of strung meat pieces, interspersed with onions and vegetables, a pig, a lamb or a whole bull was strung on a skewer. Everything depended on the appetite of its owner.

Shish kebab is not only meat, but also vegetarian. For him, as a rule, they use zucchini, eggplants, tomatoes, onions, mushrooms and other vegetables, which are convenient to string on a skewer, as long as there is no excessive moisture. It is this requirement that comes into play when picking tomatoes. They shouldn’t be too juicy. Better to take the varieties used for salads.

After the food is skewered, it is placed over the fire. In this case, the height is selected such that they are not in direct contact with the fire. This is what water is used for. As a result of spraying the wood with water, the fire disappears, and the heat emitted by the wood continues to affect the food. In addition, substances contained in the wood rise with the steam. Therefore, it is not advisable to use softwood firewood for frying. The food received on them will be bitter, seemingly not appetizing. The best choices for frying are grape wood or fruit trees.

As for frying meat, it can be fried in small pieces on a skewer, or cooked directly on the bone. The most popular dish is fried ribs. In order to cook them, a skewer will not work. In this case, you need to get a barbecue. This is a grid on which food is laid out, then fry. It is on her that the ribs creep.

As a result of barbecuing, the bones, heating up, fry the meat from the inside. Thus, the cooking time is significantly reduced.

In addition to ribs on the barbecue, you can also grill pieces of meat up to 2 cm thick. The meat cut into pieces is pre-marinated in a mixture of vinegar and aromatic herbs. As a result, it goes through the stage of primary processing. The meat becomes softer, tastier and more juicy. Protein is easier to digest. And the spices give the meat an excellent taste and aroma.

Useful properties of food cooked over an open fire

Thanks to frying on an open fire, products acquire a beautiful appearance and aroma, which has been familiar to mankind since ancient times. In terms of taste, foods fried over a fire equate to delicacies.

As you know, the desire to try a particular dish arises when we look at it. If it has a beautiful appearance, and the smell tickles the nostrils, we automatically begin to release gastric juice. We want to try it!

Fried foods are easier for the body to digest, supplying the body with full-fledged building materials.

Dangerous properties of food cooked over an open fire

As for the harmful properties, they are that foods fried over a fire can irritate the mucous membrane of the gastrointestinal tract. This is due to the substances present on the surface of the product. In addition, fried foods can cause cancer. This is due to the fact that as a result of burning wood, carcinogenic substances are formed in the smoke, which then settle on the surface of the products.

Therefore, in order to be healthy, people suffering from stomach ulcers, gastritis, enterocolitis, as well as diseases of the cardiovascular system should eat fried in a limited amount, and also cut off the top, most fried layer before use.