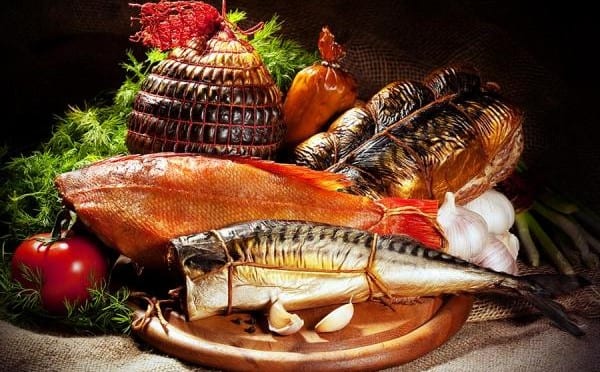 Smoking is hot, cold, and now a new technology is being applied using liquid smoke.

This technology involves the processing of fish and meat with hot smoke from hardwoods. Due to the fact that the temperature of the applied smoke ranges from 45 to 120 ° C, the smoking time can be extended from one to several hours.

Products that have undergone such processing are juicy and rich in aroma. Fat, which is in a certain zone before the start of smoking, is evenly distributed throughout the product during smoking. Smoked meats obtained in this way are good for immediate use. This is due to the fact that meat and fish, as a result of hot smoking, are not sufficiently dried, which can subsequently negatively affect the quality of the product.

The maximum storage time for hot smoked products is no more than 6 months in cold conditions.

Cold smoking, as well as hot smoking, involves the use of smoke. But unlike the first, the smoke in this case is cold, no more than 20 ° C. This method of smoking is longer, since meat or fish are located far from the heat source, and are fumigated exclusively with cooled smoke. Sometimes the smoking time can be extended up to several days. The resulting products are less fatty, drier and contain more natural preservatives.

Thanks to this, cold smoked products can be stored for a longer time without losing their taste and nutritional properties, as well as without exposing the consumer’s life to the threat of poisoning.

Smoking technology using liquid smoke is still relatively new, but has good reasons for its dominant position. This is due to the technology for the production of liquid smoke. First, the prepared firewood is burned in the oven. The resulting smoke is passed through water.

As a result, the water is saturated with smoke. Then comes the stage of cleaning the solution from harmful compounds. Thus, liquid smoke sold in stores contains fewer carcinogens than smoke from a fire. The only drawback of liquid smoke is the fact that there is no exact composition of it, and dishonest manufacturers can violate the technology of its manufacture. So it is worth keeping an eye on the reports of the European Food Safety Agency.

As for the smoking technology itself, it is absolutely simple. It is enough to soak meat or fish, cut into portions, in water with the addition of smoke, and then fry and the product is ready. Of course, it may be different from what you can get at the stake. But this is due to the purification of smoke from such carcinogens as phenol, acetone, formaldehyde, as well as from such a dangerous substance as methylglyoxal.

The value of products obtained using smoking technology is at the top of gastronomic delights. Smoked meat becomes more appetizing, easier to digest, and thanks to the taste of smoke, it turns into a real delicacy.

As for the negative aspects of smoking, products that have been processed with smoke are not recommended for people suffering from: gastritis, stomach ulcers, cholecystitis, and also prone to allergic reactions.

You should also limit the use of smoked meats to people in whose families there was a case of cancer (due to a high predisposition). Nitrosamines released during smoking are highly carcinogenic.

Nutritionists believe that cold smoking is much preferable to hot smoking. Such dishes, in their opinion, do not have carcinogenic activity.