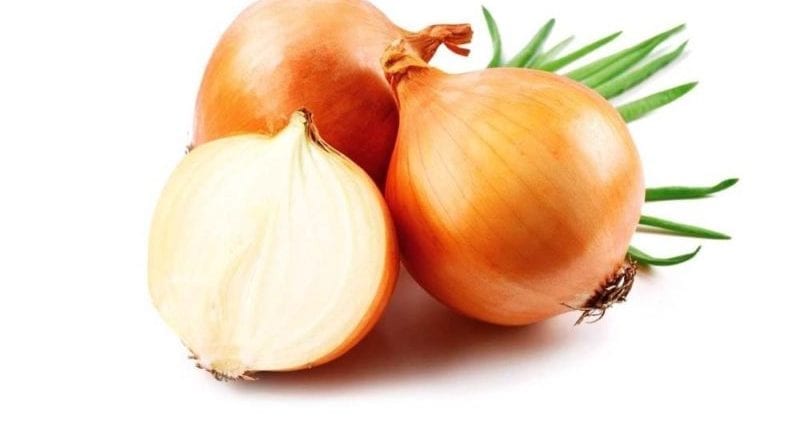 Onions have been known for their healing properties long before antibiotics and antimicrobial potions were introduced. Healers of all times and peoples revered onions as the primary means of fighting viruses and infections of various origins. In addition, onion stimulates appetite, helps to establish intestinal functionality, enhances the body’s immunity and enhances overall resistance to respiratory diseases. Fresh onion juice helps to cope with disorders of the gastrointestinal tract, atherosclerosis, colds and bronchitis, hypertension and sexual dysfunction.

What else is useful to know about onions and their properties

The onion is also endowed with magical properties, used as a talisman and amulet. There is a belief that onions are able to drive away evil spirits and ill-wishers from the house. Even in ancient Rome, tightly woven bundles of onion heads were hung opposite the front doors – they were supposed to protect and guard the home from the intrusion of uninvited guests. The onion protects the hearth of the house from dark, demonic forces. Most likely, the attribution of such properties to onions was due to the presence of a large amount of volatile phytoncides in it and the peculiar, frightening smell of the vegetable itself.

The healing and beneficial properties of onions can be listed and enumerated. There are many recipes for traditional medicine, where onions act as the main ingredient and are designed to relieve a person of many ailments. There are practically no allergic reactions to onions, but some caution is still needed when using this vegetable as a medicine. The phytoncides contained in onions, with prolonged contact with mucous membranes, can cause them to burn. It should also be remembered that before starting to use any folk remedy, be sure to consult with your doctor. Otherwise, you can check on yourself the well-known saying – we treat one thing, cripple the other.

The use of onions in traditional medicine

Traditional medicine also does not shy away from using the beneficial onion properties to treat patients. It is included in the diet for general exhaustion, constant fatigue, roundworms, lamblia and scurvy. Often, onions are used not as a mono-remedy, but in combination with other products that are characterized by their healing properties. For example, with honey, dried apricots, black radish, aloe and others. Such formulations are designed to help in the treatment of many diseases affecting the upper and lower respiratory tract, as well as fungal infections of the skin and mucous membranes.

Neurology and dermatology also need onions, as, in a certain sense, a panacea – thanks to its active healing effect, diseases such as rheumatism, dermatitis, trichomoniasis, papillomas, corns and warts recede. A mixture of onions and old lard is used to heal cracks and calluses on the feet, and juice and castor oil are used to prevent hair loss and breakage. In the summer, it is necessary to rub the places of mosquito bites with onions, this will relieve itching and irritation from the skin. Aloe leaf moistened with onion juice is applied to fistulas, boils, apnea and purulent acne – thanks to this, the core of the abscess comes out, and the wound remains clean and disinfected. Baked bulbs are recommended to be eaten for obesity, joint inertness, inactive lifestyle, fluid stagnation and urolithiasis.

Scientists have long proven the fact that vitamins are extremely important for the normal and full functioning of the human body. Therefore, a lack of any of the vitamins can adversely affect our well-being and health. Currently, science knows only thirteen essential vitamins, and they are all found in common onions. Without the regular use of this product – we run the risk of coming to a dangerous state – vitamin deficiency. Which, in turn, will necessarily lead to poor health and a decrease in the level of immunity.

Most of the vitamins physiologically cannot be reproduced by our body, which means that a person can get their daily dose only during a meal. Vitamins cannot be accumulated by the body in reserve, so it is necessary to constantly have year-round sources in the diet – and among them, of course, onions

Onions, also called Spanish or yellow, are usually quite spicy, with a long sticky smell, so many people prefer not to use them raw. To get rid of excess smell and bitterness, you can lightly marinate the onion in lemon juice or vinegar, adding a little sugar.

White onions have smooth, round heads, slightly larger in size than yellow ones, with a transparent white skin. White onion is a type of onion, it is noticeably less spicy, but more aromatic and sweet.

Hovsan Azerbaijani onion has a slightly elongated shape, pale lilac hue and sweetish taste, and is one of the essential ingredients of traditional bozbash.

Surprisingly, but in supermarket there are ready-made fried onions: good ones are produced in the Netherlands under the Top Taste brand. Crispy flakes of such onions are convenient to throw as a seasoning, to fry, add to salads or cook burgers with it. A 150-gram jar costs about 80 rubles, but it lasts for a long time.

Pearl or cocktail onions are small onions pickled in vinegar – they are used in the classic bœuf bourguignon recipe or, for example, used to decorate the Gibson cocktail. Quite good pickles are sold under the Kuhne brand in many supermarkets.

Vidalia onions have slightly flattened heads like pumpkins, fruity aromas and so much sweetness that they can be eaten just like apples.

The most famous Russian variety of onions is considered to be the Romanov variety. These are red, even rather pink, onions of not too large size with rather high acidity, very thin and tightly fitted layers to each other. Grown in the Yaroslavl region, in the city of Romanov, since the 15th century.

Sweet varieties of onions – white, red, vidalia – have little or no bitterness, so it’s good to add them to fresh salads.

Salted onions are prepared quite simply: for this, small whole onion heads, peeled from the husk, need to be put in a jar, add spices – for example, allspice, cloves and bay leaves – pour with brine and leave for several days. Then it is good to add such onions to meat dishes and sauces.

Onions are often used in weight loss programs. Doctors began to prescribe this vegetable in the fight against obesity back in the days of the “father of European medicine” Hippocrates, who lived in 460-370. BC e. Onions contain only 35-45 kcal.

In addition, its components, to a greater or lesser extent, provide indirect assistance in getting rid of extra pounds: fiber increases the period of satiety, and, accordingly, helps to reduce the number of meals without losing efficiency; vitamin B6 suppresses appetite, participating in the control of blood sugar; potassium is responsible for water and electrolyte metabolism; copper speeds up carbohydrate metabolism, as do some of the other substances in onions that provide metabolism.

However, it is difficult to live solely on an onion diet for even one week, therefore, in the most popular menus for weight loss, onions rather become an addition to the main dishes of chicken fillet, veal, boiled fish, but its share in comparison with the usual diet increases. The exception is onion soup, to which, wanting to lose weight faster, overweight people completely switch over for 5-7 days.

As part of the dietary (non-classical) version of the soup for 2 liters of water, take: onions (6 pcs.), White cabbage (0.5 heads), bell peppers (100 g), tomato (3 pcs.), Medium-sized carrots and celery (1 pc.). The soup is prepared before the ingredients are boiled. Salt is added to taste before serving.

Who said a vegetarian can’t have great abs?

Harvard on the cold