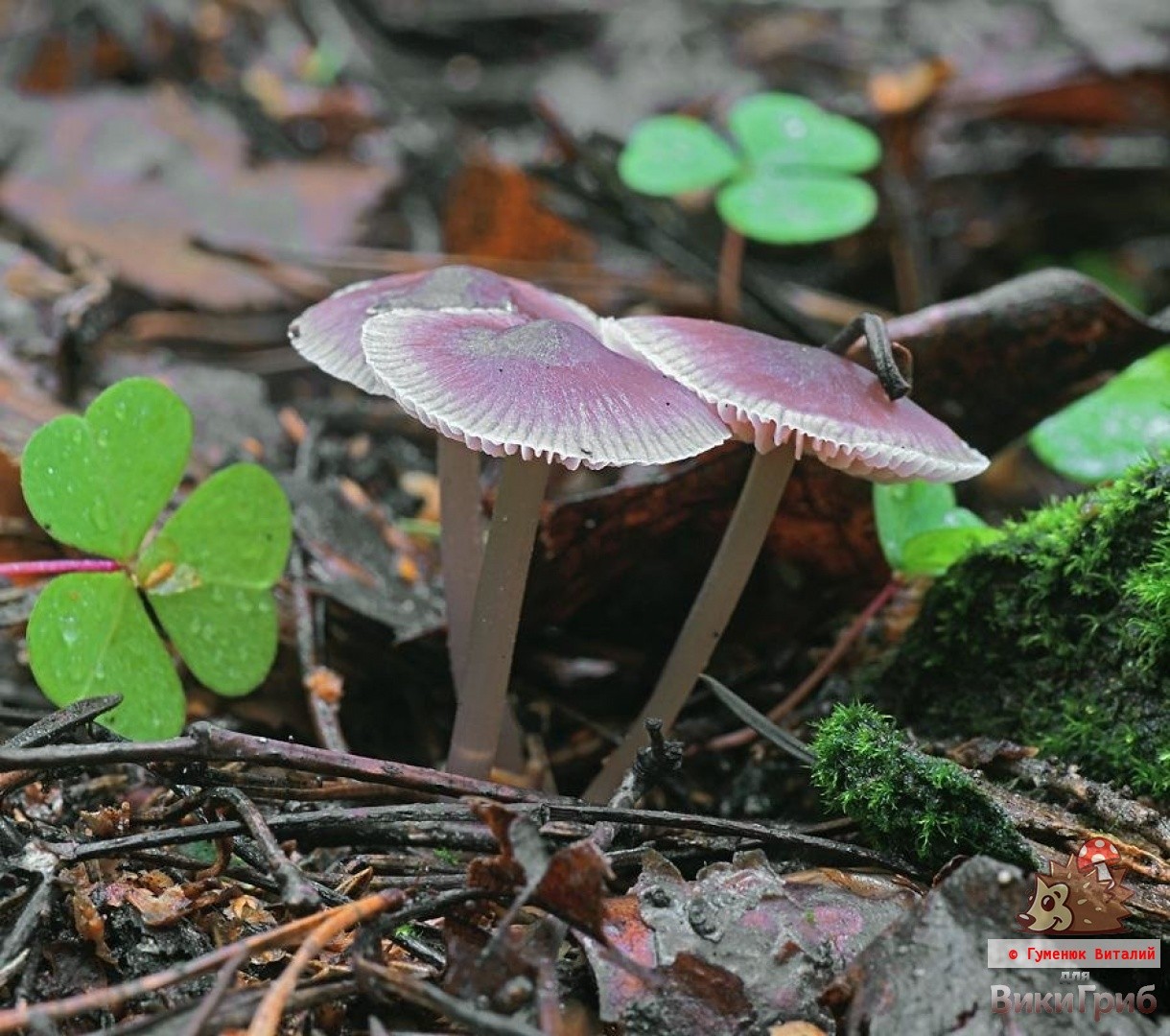 The genus Mycena includes a large number of species, we are talking about several hundred species, according to various sources – more than 500.

The definition of Mycena to the species is often impossible for a rather prosaic reason: there is still no detailed description of the species, there is no identification by key.

More or less easily identified mycenae, which “stand out” from the total mass. For example, some species of Mycena have very specific habitat requirements. There are mycenas with very beautiful cap colors or a very specific smell.

However, being so small (cap diameter rarely exceeds 5 cm), Mycena species did not attract too much attention from mycologists for many years. 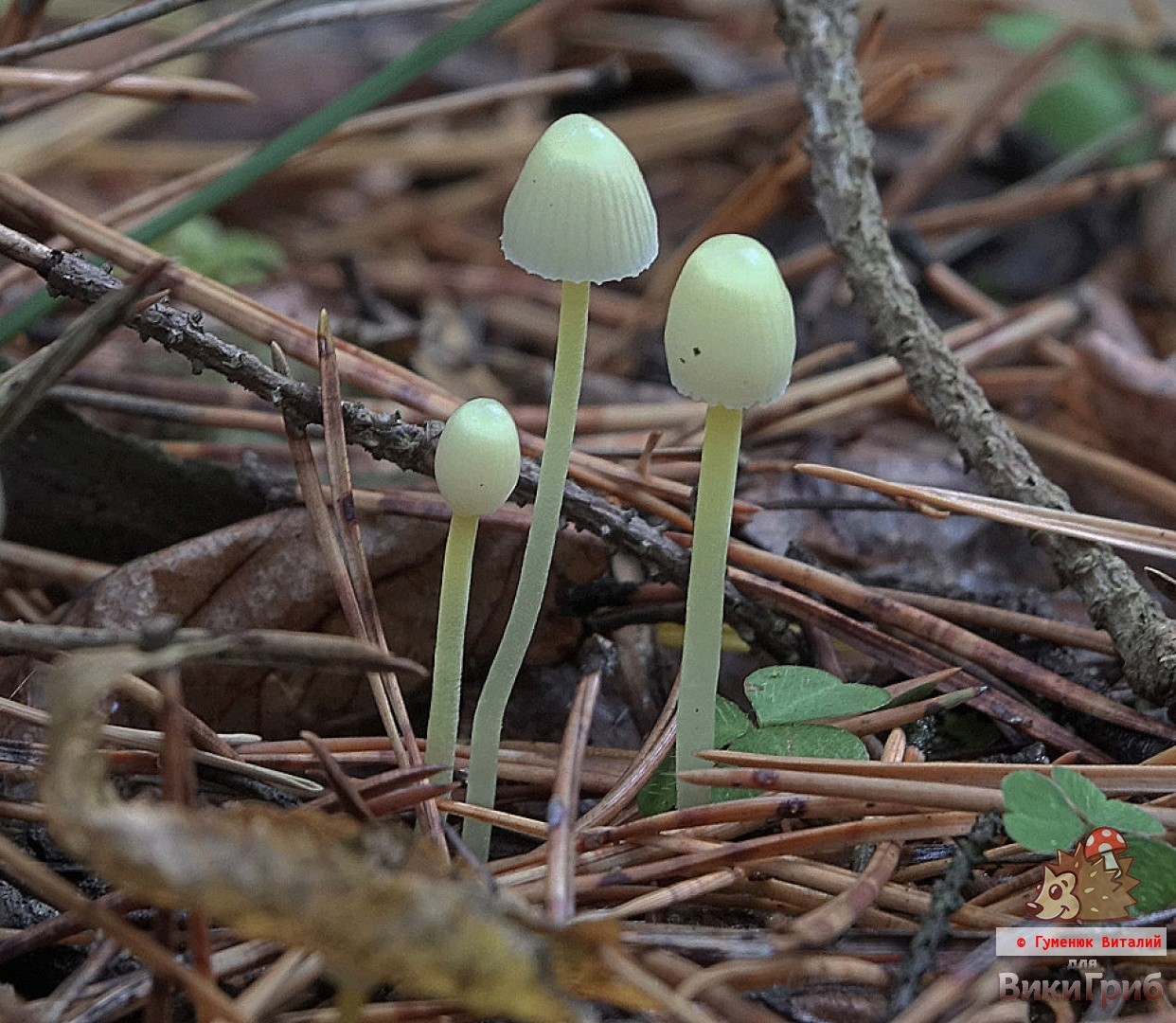 Although some of the most experienced mycologists have worked with this genus, resulting in two large monographs (R. Kühner, 1938 and AH Smith, 1947), it was not until the 1980s that Maas Geesteranus began a major revision of the genus. In general, there has been a growing interest in Mycena among European mycologists over the past decades.

Many new species have been proposed (described) in recent years by both Gesteranus (Maas Geesteranus) and other mycologists. But there is no end in sight to this work. Maas Gesteranus published a summary with identification keys and descriptions, which today is an indispensable tool for the identification of Mycenae. However, after he completed his work, many more new species were discovered. You need to start all over from the beginning.

DNA studies that included samples from different Mycena showed quite clearly that what we now call the genus “Mycena” is a rather disjointed group of genetic entities, and eventually we will get several independent genera and a much smaller genus Mycena centered around the type species Mycena – Mycena galericulata (Mycena cap-shaped). Believe it or not, Panellus stipticus appears to be more closely related to some of the mushrooms we currently place in Mycenae than many of the other species that we assume belong to the same genus. ! Other mycenoid (or mycenoid) genera include Hemimycena, Hydropus, Roridomyces, Rickenella, and a few others.

Maas Geesteranus (1992 classification) divided the genus into 38 sections and gave keys to each section, including all species of the Northern Hemisphere.

Most sections are heterogeneous. Almost always, one or more species have deviant characters. Or instances may change so much over the course of their development that some of their features may only be applicable for a limited period of time. Due to the heterogeneity of the genus, only one species is represented in a number of sections. However, since the publication of Hesteranus’s work, many new species have been discovered and a number of new sections proposed.

Everything above is, so to speak, theory, information “for general development”. Now let’s talk more specifically.

Form of growth and nature of development: mycenoid or omphaloid, or collibioid. Grows in dense dense clumps, scattered or singly 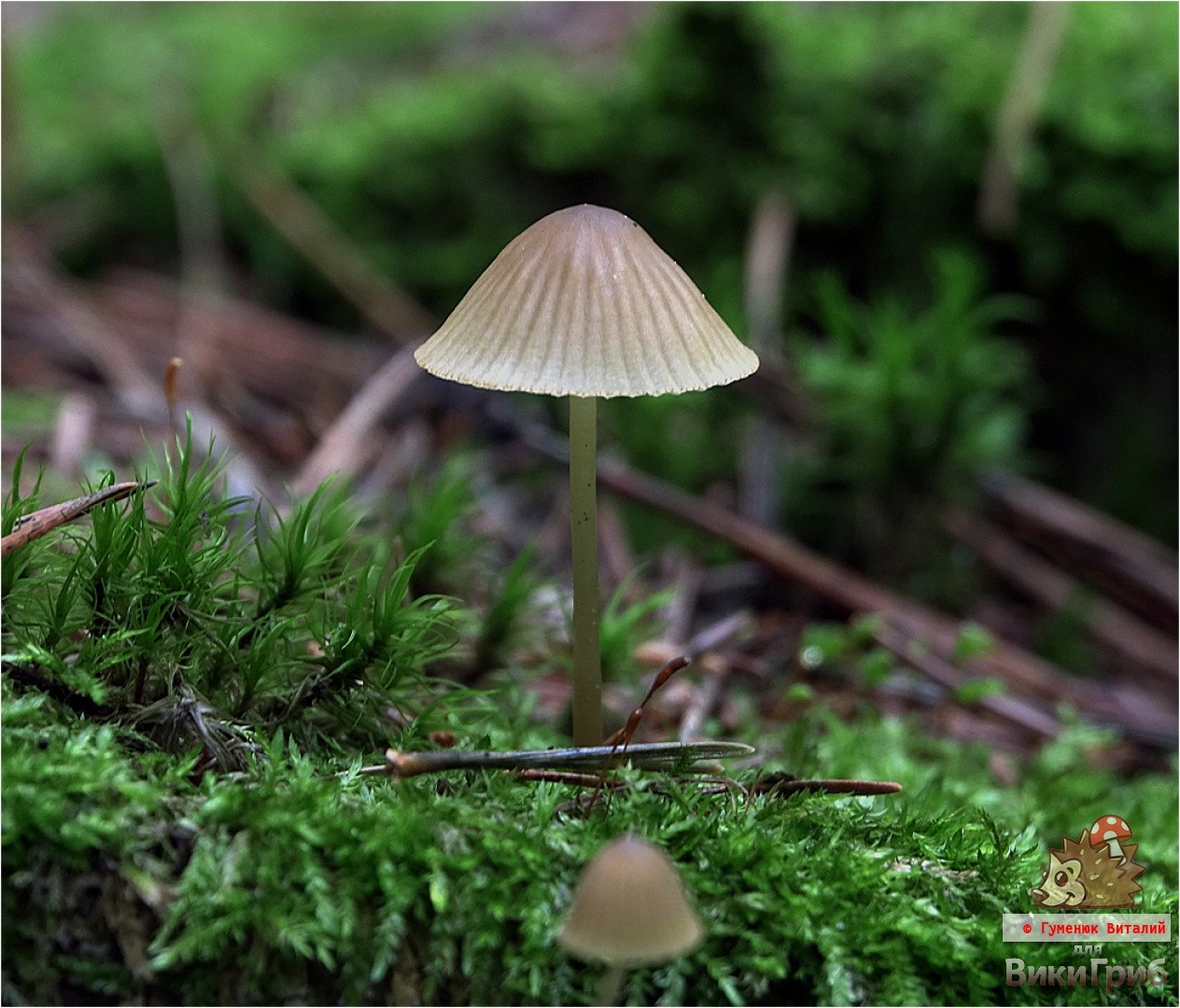 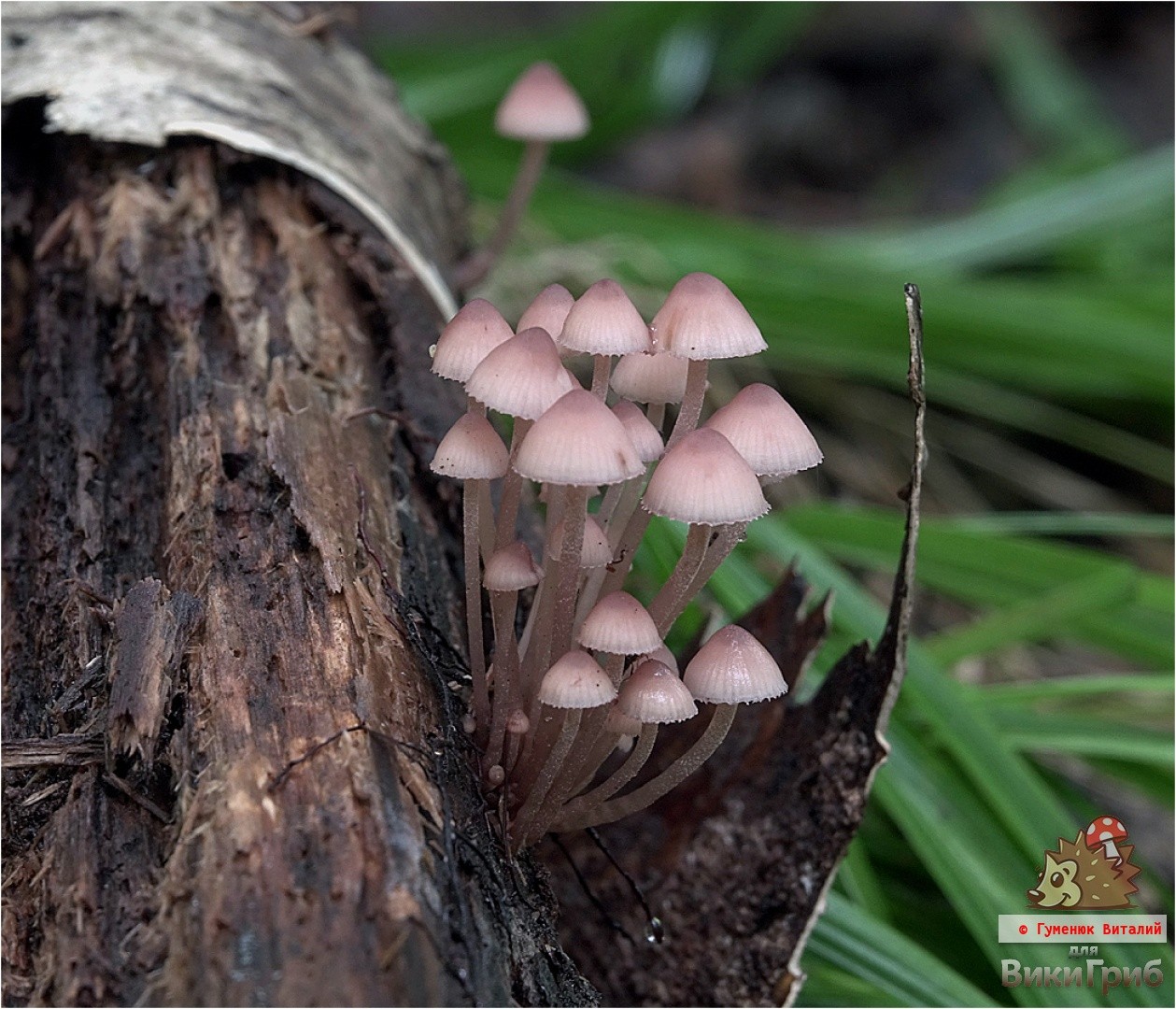 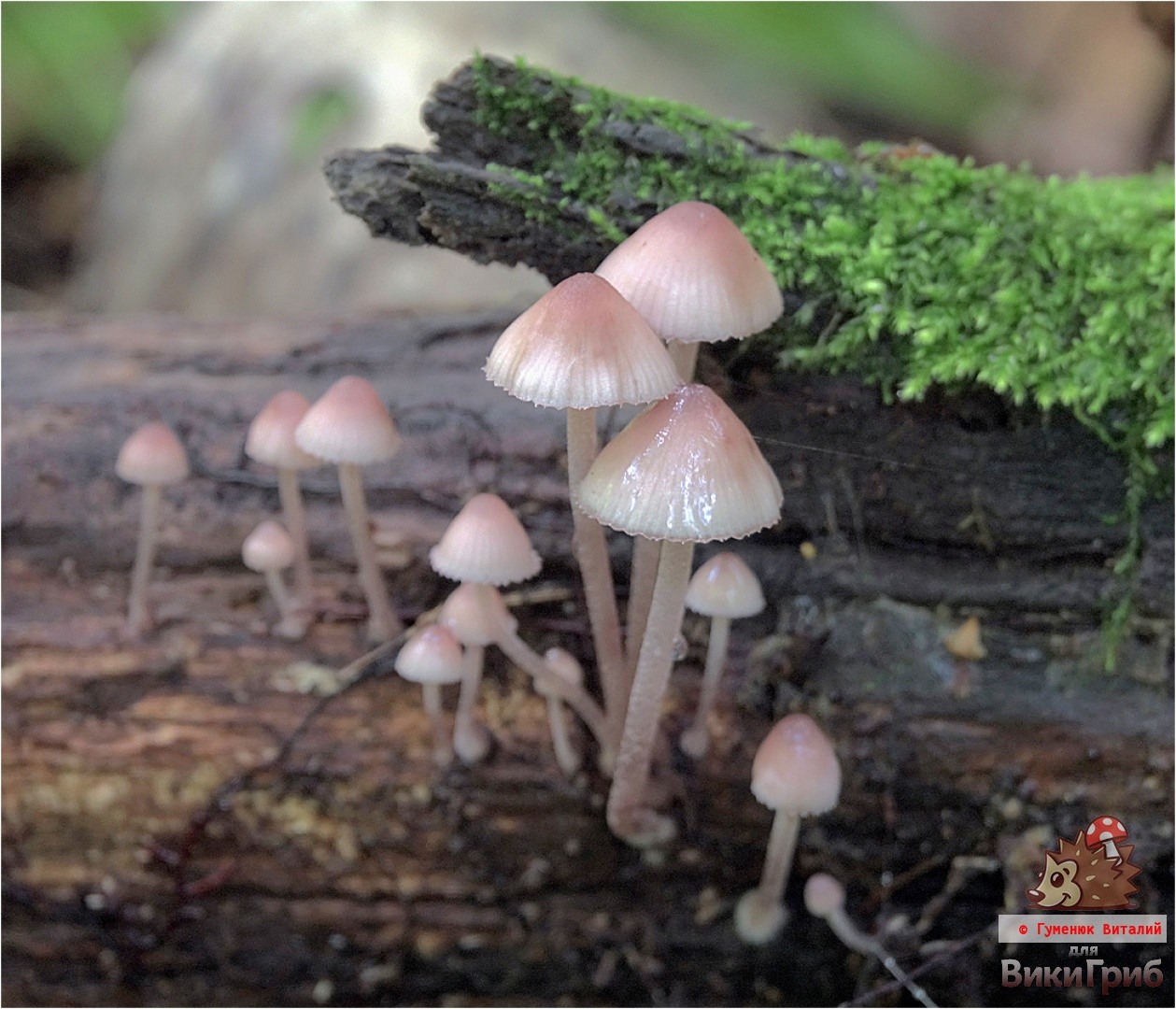 Records: Ascending, horizontal or arcuate, almost free or narrowly adherent, or descending. It is necessary to count the number of “full” (reaching the legs) plates. It is necessary to carefully consider how the plates are painted, evenly or not, whether there is a color border 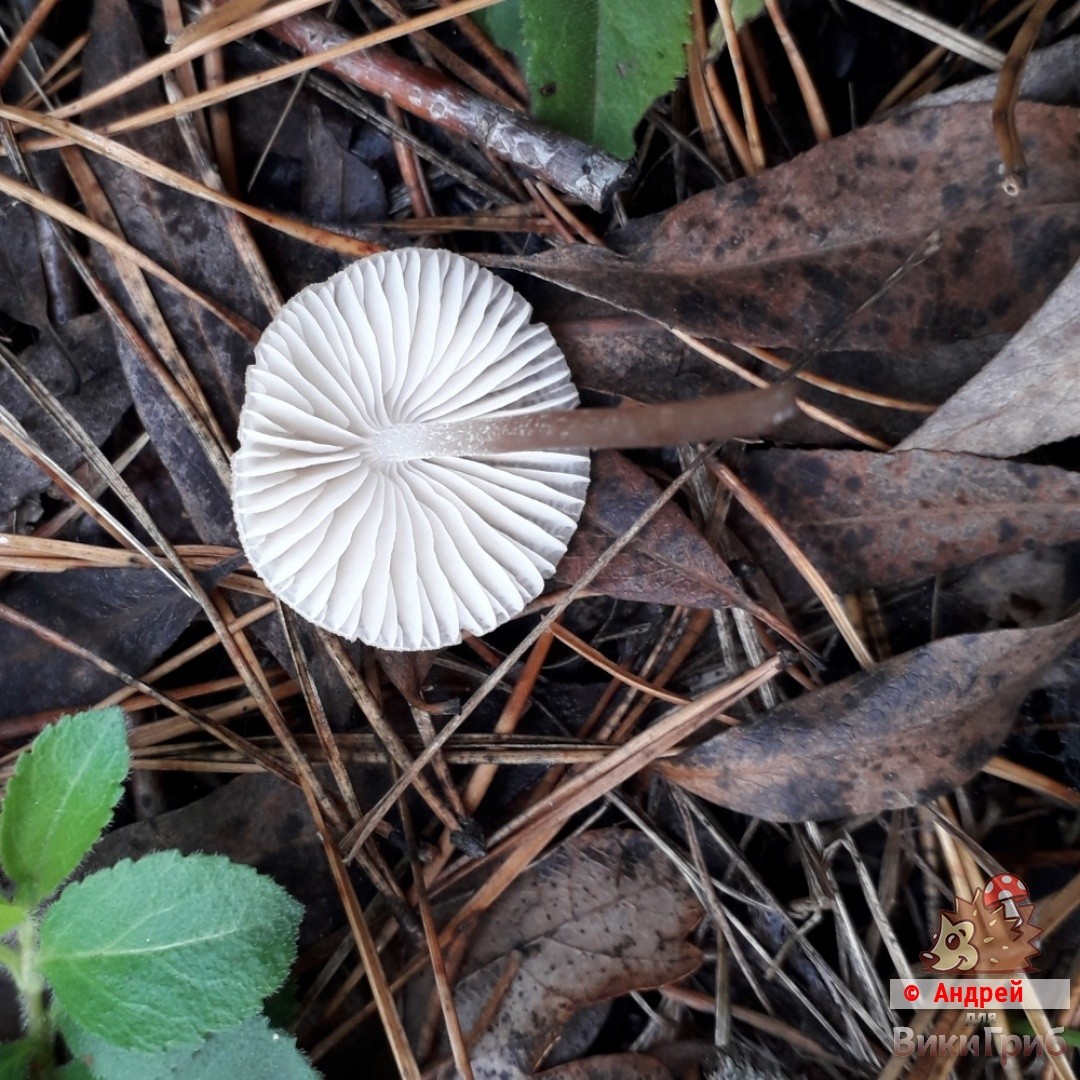 Leg: texture of the pulp from brittle to cartilaginous or resiliently rigid. The color is uniform or with darker zones. Furry or naked. Is there an expansion from below with the formation of a basal disc, it is important to look at the base, it can be covered with long coarse fibrils 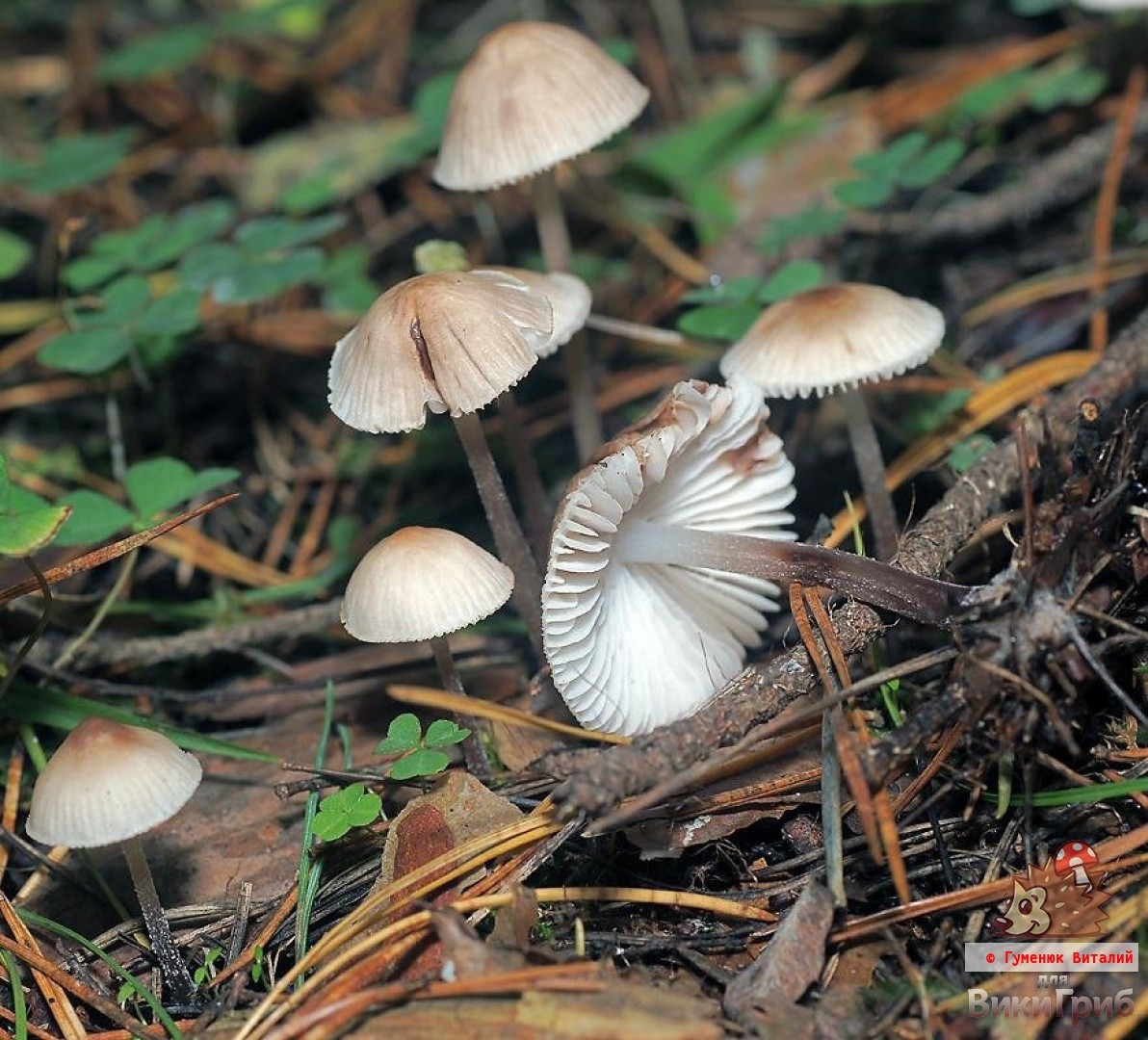 Juice. Some Mycenae on broken stems and, less often, caps exude a liquid of a characteristic color.

Smell: fungal, caustic, chemical, sour, alkaline, unpleasant, strong or weak. In order to feel the smell well, it is necessary to break the mushroom, crush the plates

Taste. Attention! Many types of mycenae – poisonous. Taste the mushroom only if you know how to do it safely. It is not enough to lick a slice of mushroom pulp. You just need to chew a small piece, “splash” to feel the taste. After that, you need to spit out the mushroom pulp and rinse your mouth thoroughly with water.

Hyphae of the cortical layer pedicels are smooth or diverticulated, sometimes with terminal cells or calocystidia.

plate tram wine-colored to purplish-brown in Meltzer’s reagent, in some cases remains unchanged

Some types of Mycenae are presented on the Mycenae Mushrooms page. Descriptions are being added gradually.

For illustrations in the note, photos of Vitaly and Andrey were used.

When the Lights Go Out: How Earth Hour Impacts Power Plants

How Tel Aviv Became the Capital of Vegans

What is it like to be a vegetarian chef and cook meat at the same time?