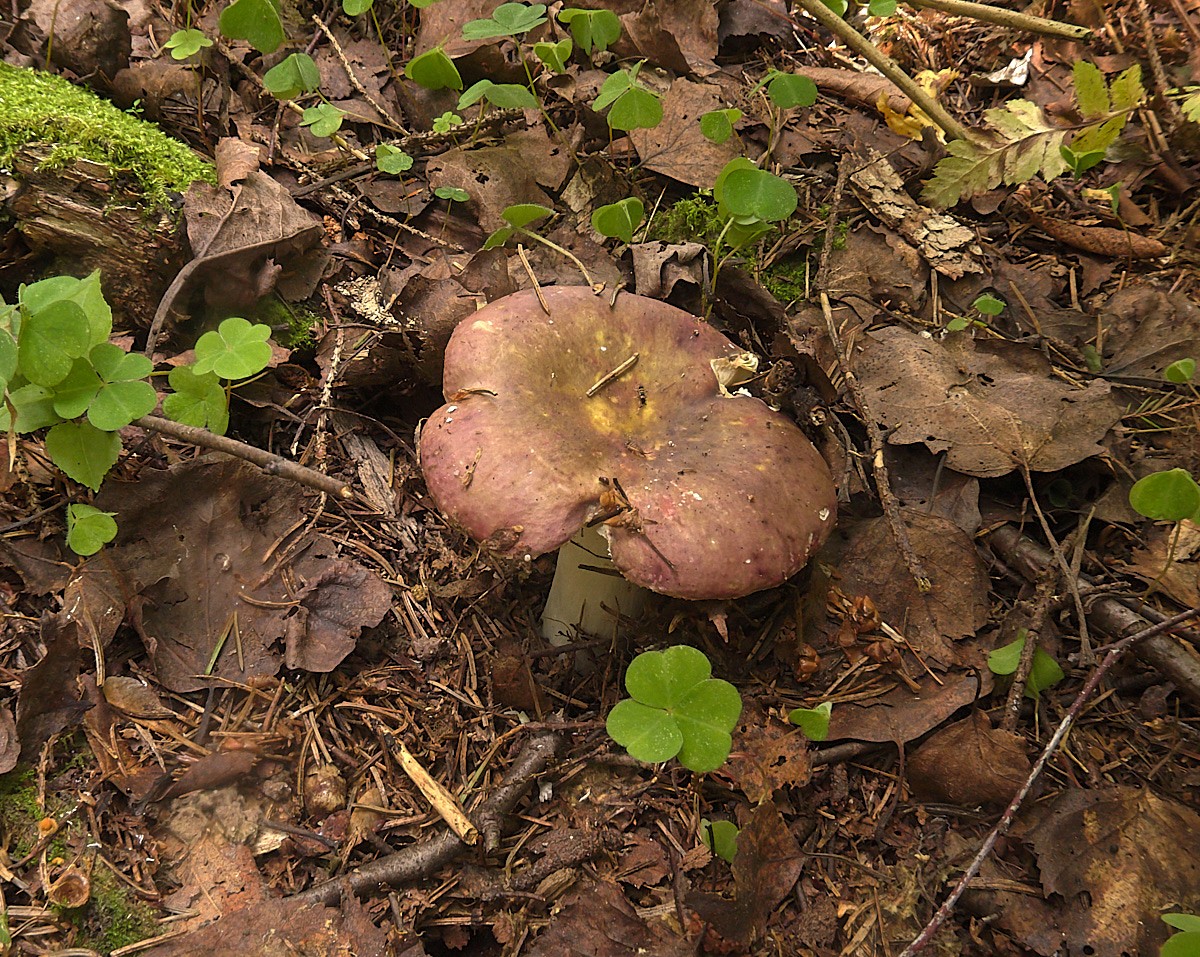 head: The color of the cap is very variable: in the center often olive green, indistinctly red-green, from pale brown to dark red-brown. On the edge, the color is red-brown, purple-brown, wine, yellowish green or grayish green. According to my observations, greenish olive tones are found on almost all specimens both by themselves, especially in the center, as well as against the background of dark colors, including almost wine-black. 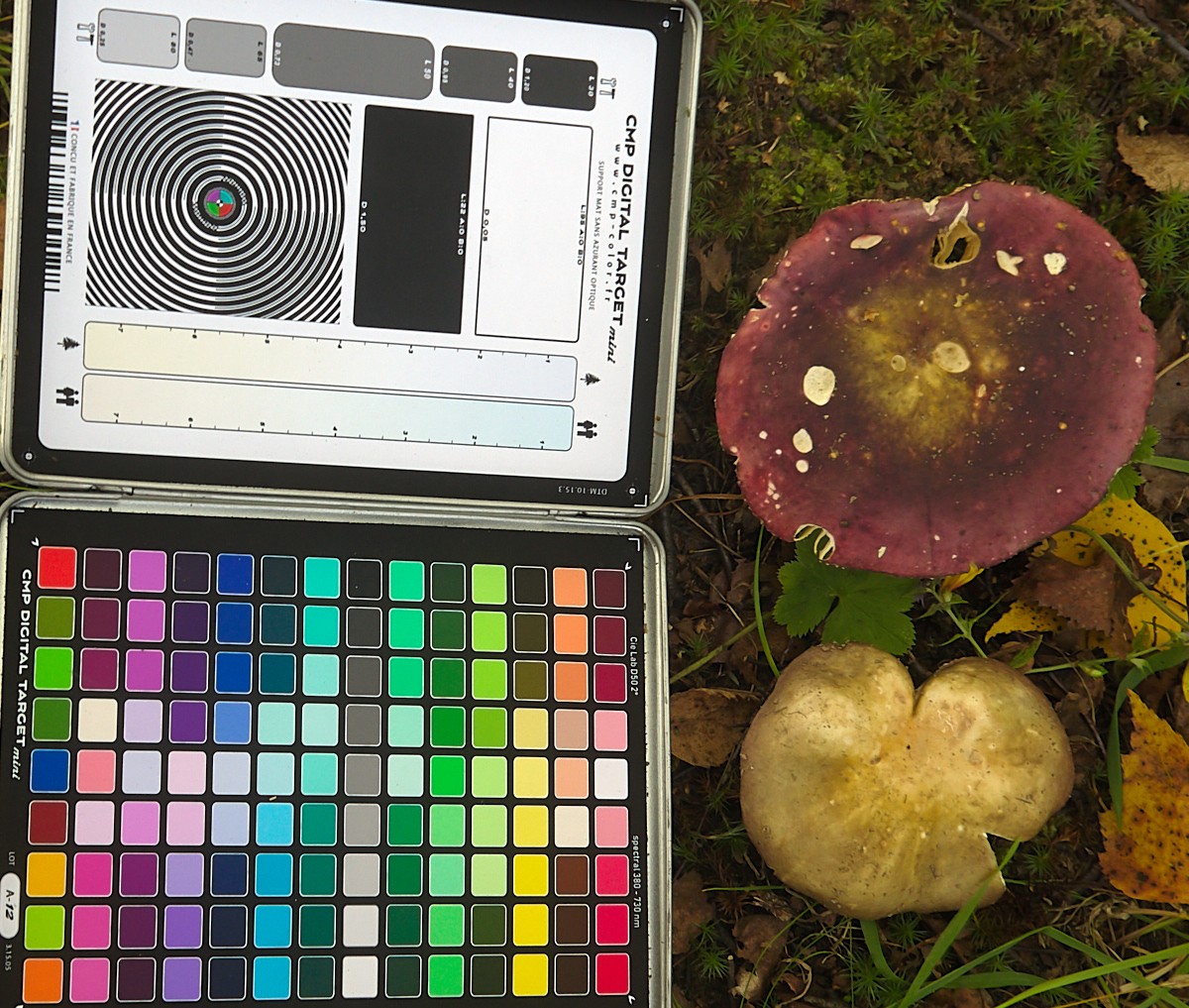 A cap with a diameter of 50-120 (150, and met even more) mm, first convex, then part of the fruiting bodies becomes concave. According to my observations, the hat often has irregular shapes, uneven, differently curved. The cap margin is smooth or with short grooves only along its outermost part. The surface of the cap is smooth, often with a silky sheen. The cuticle is removed by 1/3 … 1/4 of the radius of the cap. 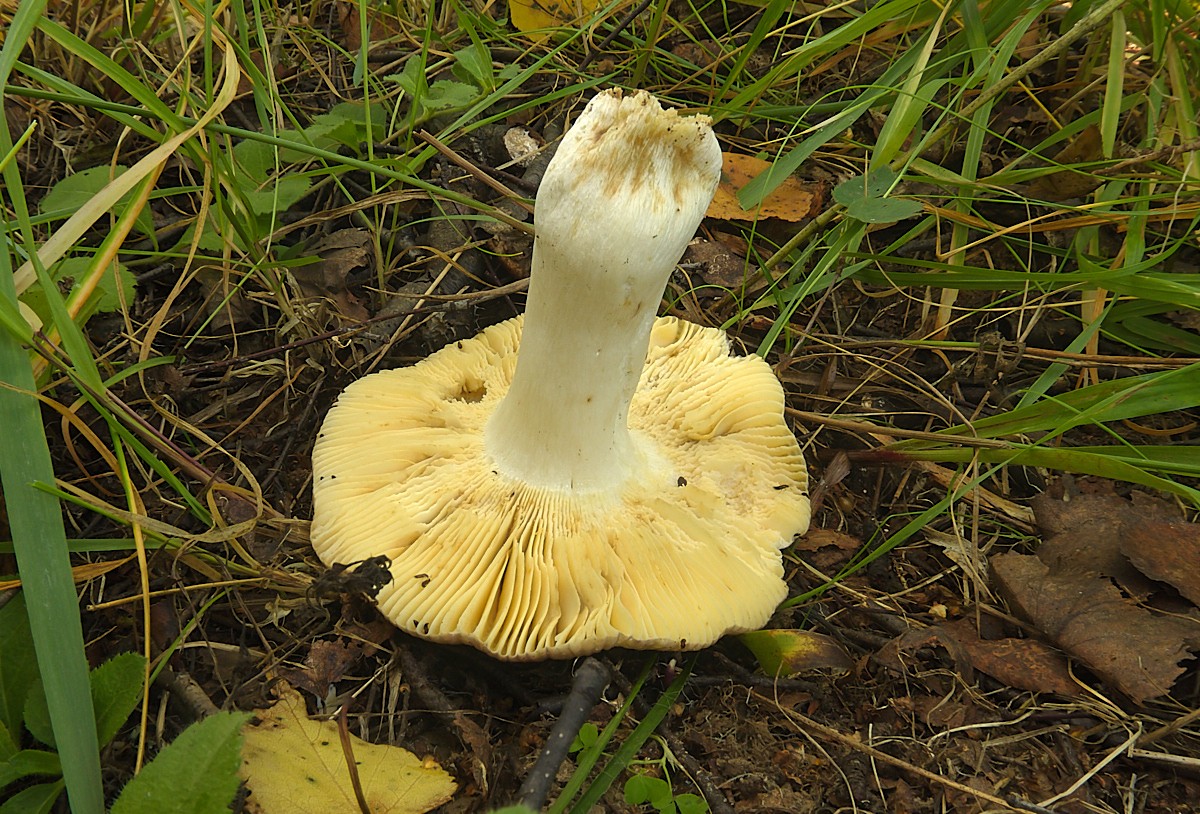 Records at first dense, creamy. Then they turn from yellow to yellow-orange, quite rare, wide (up to 12 mm), some plates may branch into bifurcations. 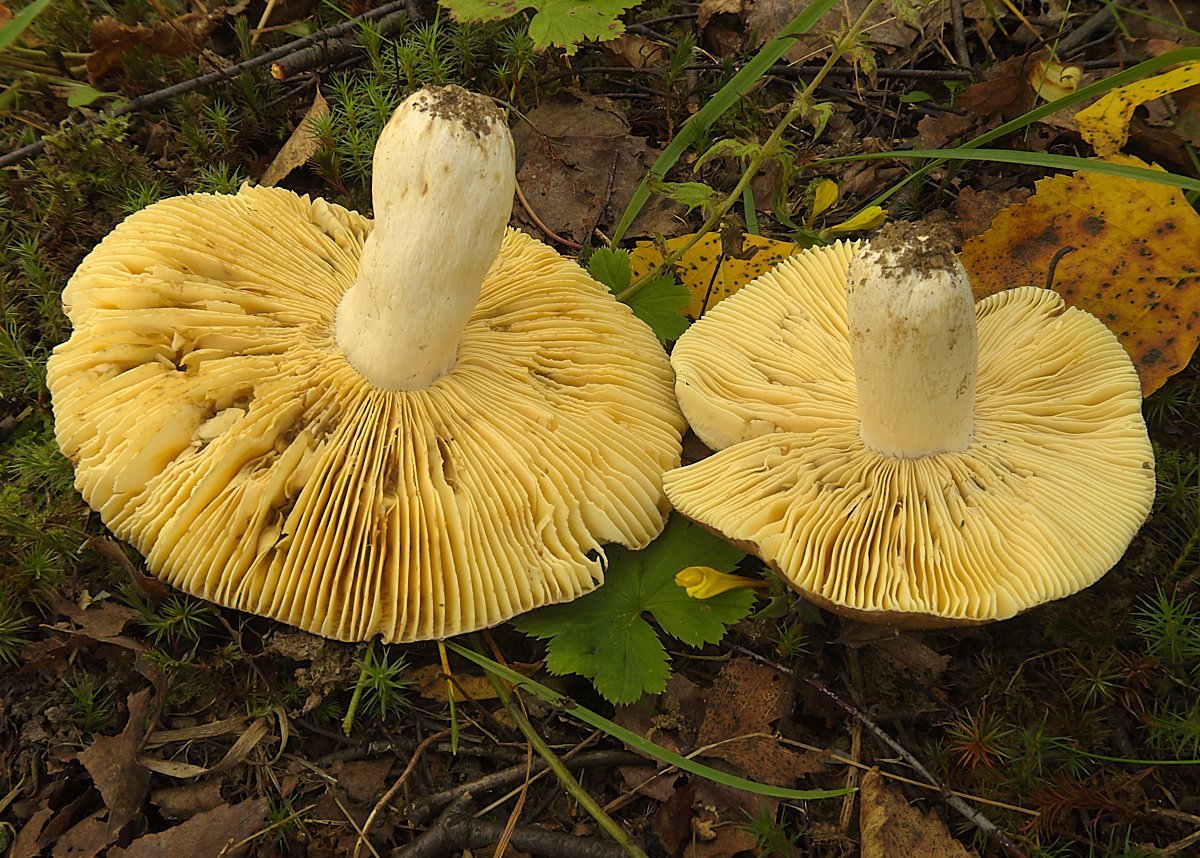 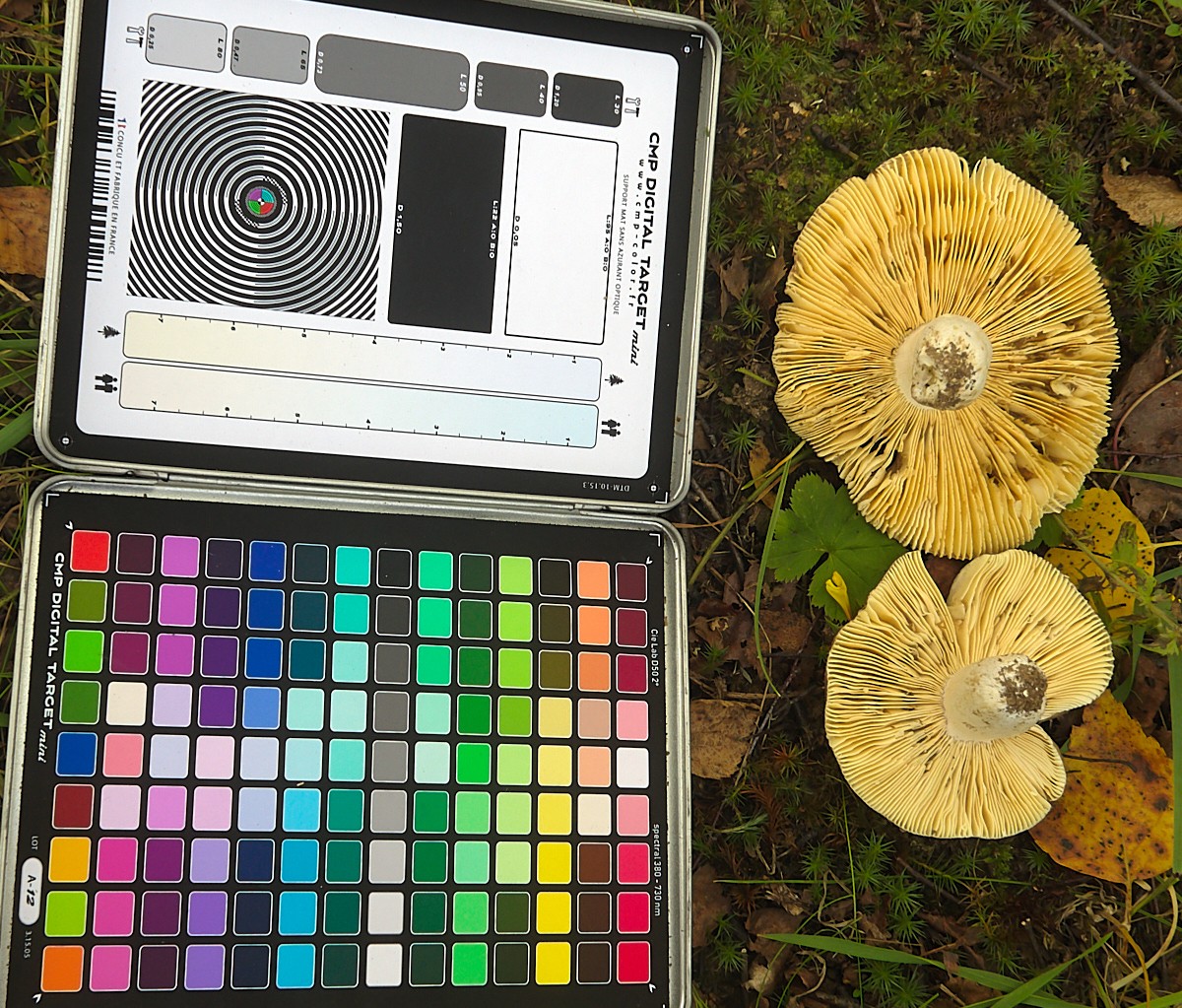 Smell fruity (although I can’t confirm this myself, as for me, it’s rather inexpressive). 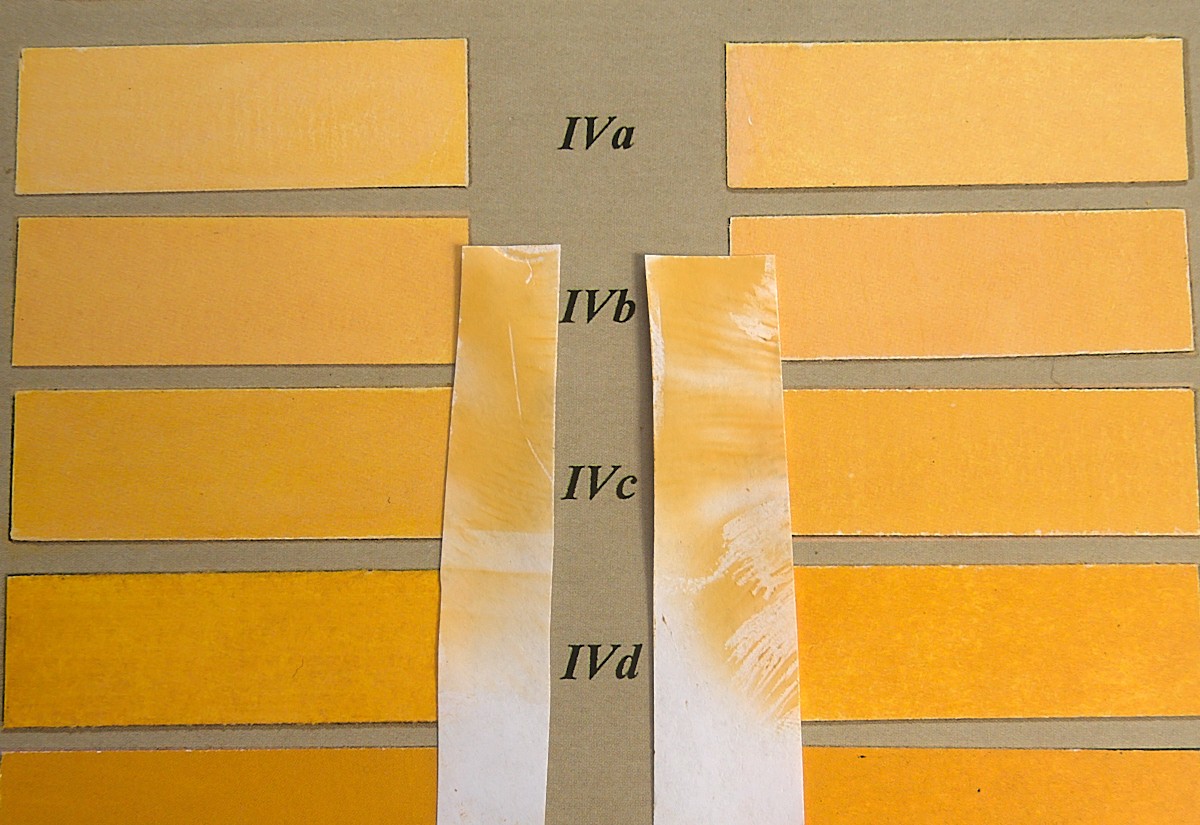 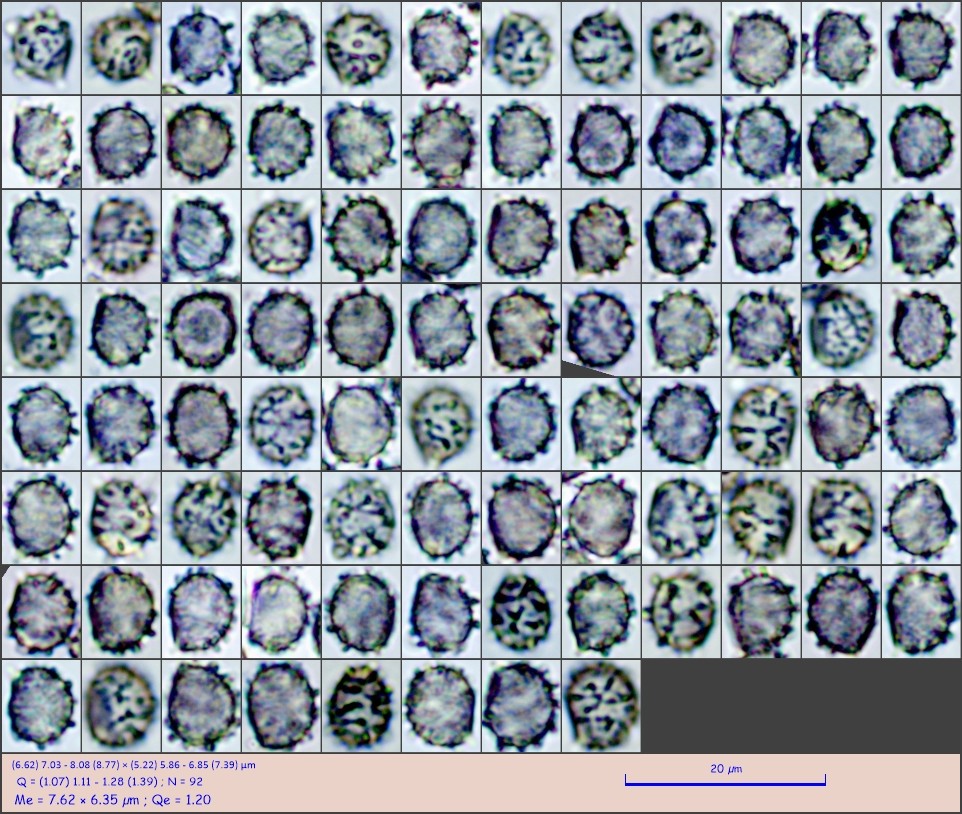 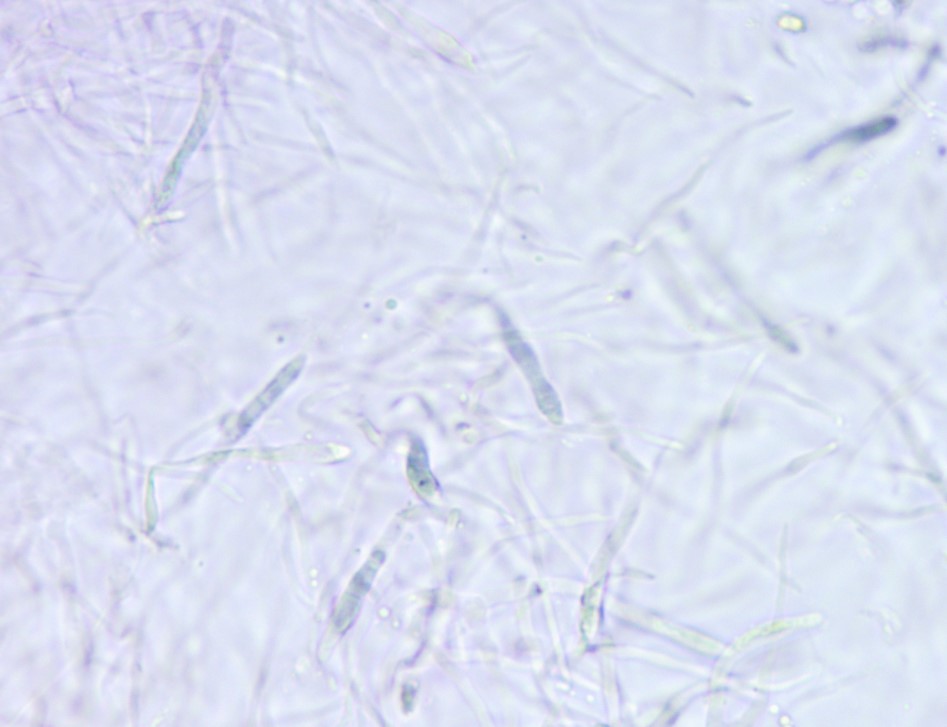 Pileipellis after staining in carbolfuchsin and washing in 5% hydrochloric acid retains the dye well. There are no primordial hyphae (having acid-resistant ornamentation).

A conditionally northern species that forms mycorrhiza with birch, according to [1], [2] prefers calcareous rich relatively moist soils. The main finds according to [1] were in Finland and Norway. However, my finds (the border of Kirzhachsky and Kolchuginsky districts of the Vladimir region) are not only on calcareous soils, the calcareousness of which is unambiguous due to the adjacent embankment of a dirt road made of “chalky” gravel, but also in a spruce-birch-aspen forest with rich litter on neutral loams, as well as at the edge, and quite deep in the forest, where there are absolutely no limestones and close. This russula begins to grow (in my area, see above) in July, and is one of the first russula to yield a crop, after Russula cyanoxantha or even with it. But in autumn I have not yet found it, and in [2] it is marked as a summer species.

Russula font-complaint – has a fairly close microscopy and distribution, also mycorrhizal with birch, but does not have olive greenish tones of the cap at all.

Russula cremeoavellanea – has an average of lighter shades of the cap, although sometimes with a predominance of green, and its leg may have pink-red shades, although not often. Its main differences are the paler shades of the plates in mature mushrooms, as well as microscopy – ornamentation without the formation of even a hint of a grid, and in pileipellis the presence of slightly encrusted hyphae.

Russula curtipes – grows in similar places, but confined to spruce, these are thinner and slender russula with a ribbed cap edge, and large spiny spores.

Russula integriformis – also confined to spruce, but found in the same places, green shades are not characteristic of it, its spores are smaller and ornamented with small spines, mostly isolated.

Russula romellii – this russula can be mentioned as similar, given the similar color range and habit, but it grows with oak and beech, and so far neither me nor according to literature data has intersected habitats with R.fulvograminea. Distinctive features, in addition to the habitat, include more reticulate spores and dermatocystids, which react extremely weakly with sulfavanillin.

How food and climate change are connected: what to buy and cook in the face of global warming

Spices and spices and their medicinal qualities and uses