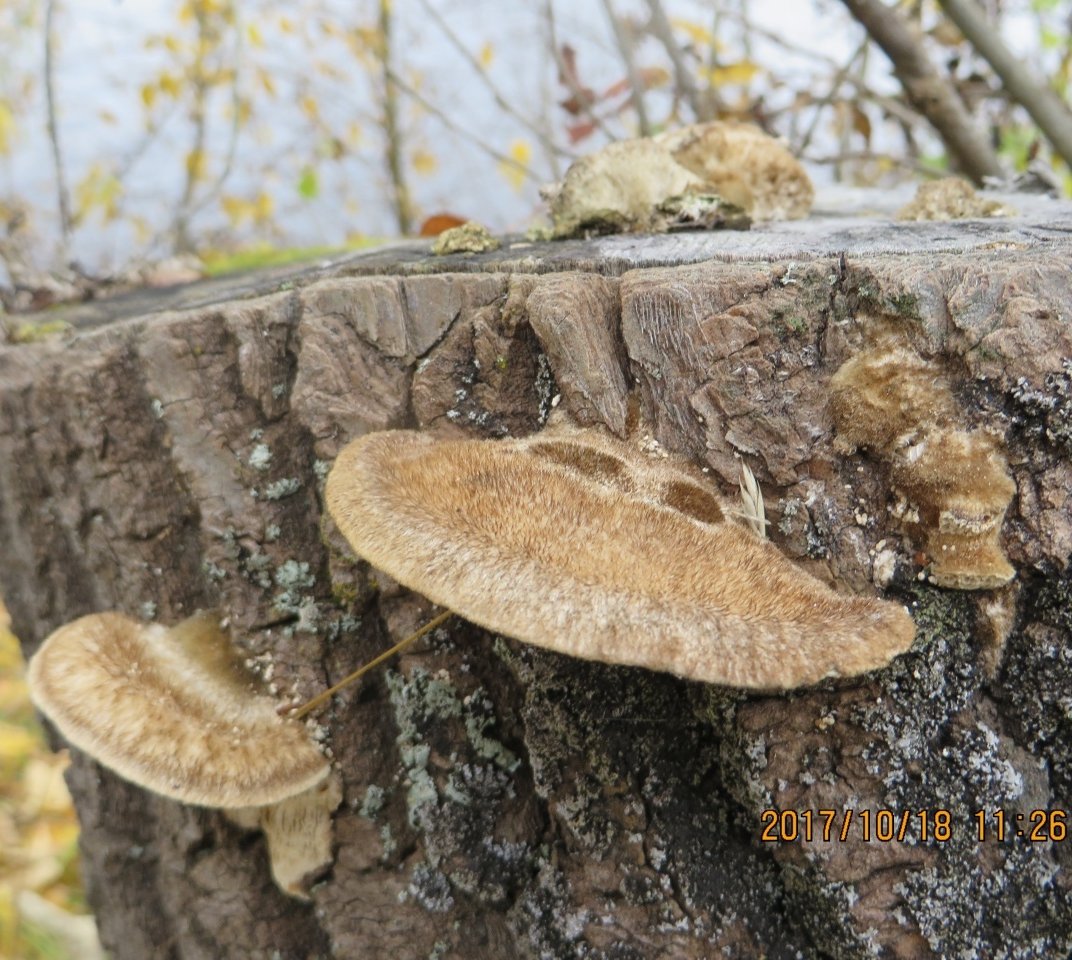 fruit bodies Troga’s trametes are annuals, in the form of widely adherent, round or oval sessile caps, arranged singly, in rows (sometimes even fused laterally) or in imbricate groups, often on a common basis; 1-6 cm wide, 2-15 cm long and 1-3 cm thick. There are also open-bent and resupinate forms. In young fruiting bodies, the edge is rounded, in old ones it is sharp, sometimes wavy. The upper surface is densely pubescent; on the actively growing edge velvety or with soft hairs, in the rest of the hard, bristly; with fuzzy concentric relief and tonal zones; from dull grayish, grayish yellowish to brownish yellow, orange brownish and even quite bright rusty orange; it becomes more brown with age.

Hymenophore tubular, with an uneven surface, white to grayish-cream in young fruiting bodies, becoming yellowish, brownish or brownish-pink with age. The tubules are single-layered, rarely two-layered, thin-walled, up to 10 mm long. The pores are not quite regular in shape, at first more or less rounded with a smooth edge, later angular with a serrated edge, large (1-3 pores per mm), which is a good distinguishing feature of this species.

the cloth whitish to pale ocher; two-layer, cork in the upper part and cork-fibrous in the lower, adjacent to the tubules; when dried, it becomes hard, woody. It has a mild taste and pleasant smell (sometimes sour).

Trametes Troga grows in forests on stumps, dead and large deadwood, as well as on drying deciduous trees, most often on willows, poplar and aspen, less often on birch, ash, beech, walnut and mulberry, and as an exception on conifers (pine ). On the same sustratum, they may appear annually for several years. Causes a fast-growing white rot. The period of active growth is from late summer to late autumn. Old fruiting bodies are well preserved and can be seen throughout the year. This is a fairly thermophilic species, so it prefers dry, wind-protected and well-warmed places. Distributed in the northern temperate zone, found in Africa and South America. In Europe, it is quite rare, it is included in the Red Lists of Austria, the Netherlands, Germany, France, Latvia, Lithuania, Finland, Sweden and Norway.

Outwardly similar Coriolopsis Gallic (Coriolopsis gallica, former Gallic trametes) is distinguished by a felted pubescence of the cap, a darker hymenophore and a brown or gray-brown fabric.

Representatives of the genus with large pores Antrodia are distinguished by the absence of such pronounced pubescence and white fabric.

Trametes Troga is inedible due to its hard texture.