Tea (chin. cha) non – alcoholic drink made by steeping or boiling the specially processed plant leaves. People harvest the leaves from the same bushes grown in extensive plantations in warm and humid climates. The most favorable weather conditions are tropical and subtropical.

Initially, the drink was popular only as a drug; however, during the Tang dynasty’s reign in China, this brew became a popular drink for daily use. Many myths and legends accompany the advent of tea. According to Chinese legend, the drink created one deity, who created all things arts and crafts, Shen-Nun, who accidentally dropped a few leaves of the tea bush in the pot with the herbs. Since that time, he drank only tea. The appearance of the legend dates back to 2737 BC.

Later legend is a legend about Buddhism’s preacher, Bodhidharma, who, while meditating accidentally fell asleep. Waking up, he was so angry at himself that in a fit cut off his eyelids. In the place of fallen eyelids, he put rose tea; the next day tasted its leaves. Bodhidharma felt fit and energized.

Into Europe, the drink came in the 16th century, First in France, with Dutch traders. A big fan of this brew was Louis the 14th, who said that Eastern men drink tea to treat gout. It is this disease that often troubled the king. From France, the drink spread in all European countries. It is especially loved in Germany, the UK, and the countries of the Scandinavian Peninsula. The ten countries with the highest volume of tea consumption included: England, Ireland, New Zealand, Australia, Canada, Japan, Russia, USA, India, Turkey. 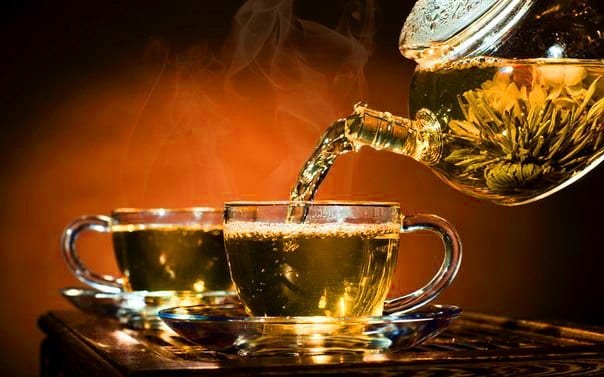 Collection and sorting of tea leaves is exclusively manual work. Most valued the top two leaf shoots and adjacent unblown buds. Using this raw material, they get expensive brew variety. The ripe leaves they use for cheap varieties of tea. The mechanization of the Assembly of tea is not economically advantageous because the collection combines mixes good raw material with a large amount of debris in the form of dried leaves, sticks, and coarse stems.

The 6 Types Of Tea

After Assembly, the tea production has several stages:

There is an extensive classification of tea according to various criteria:

Depending on the type of the plant and the fermentation process, there are rules for brewing the drink. To prepare a single serving of tea, you should use 0.5-2.5 tsp of dry tea. The varieties of black brew you must pour with boiling water, while green, white, and yellow varieties – boiled water cooled to 60-85°C.

The process of making tea has its principal stages.

Following them you can get truly great fun and the process of cooking and the drink: 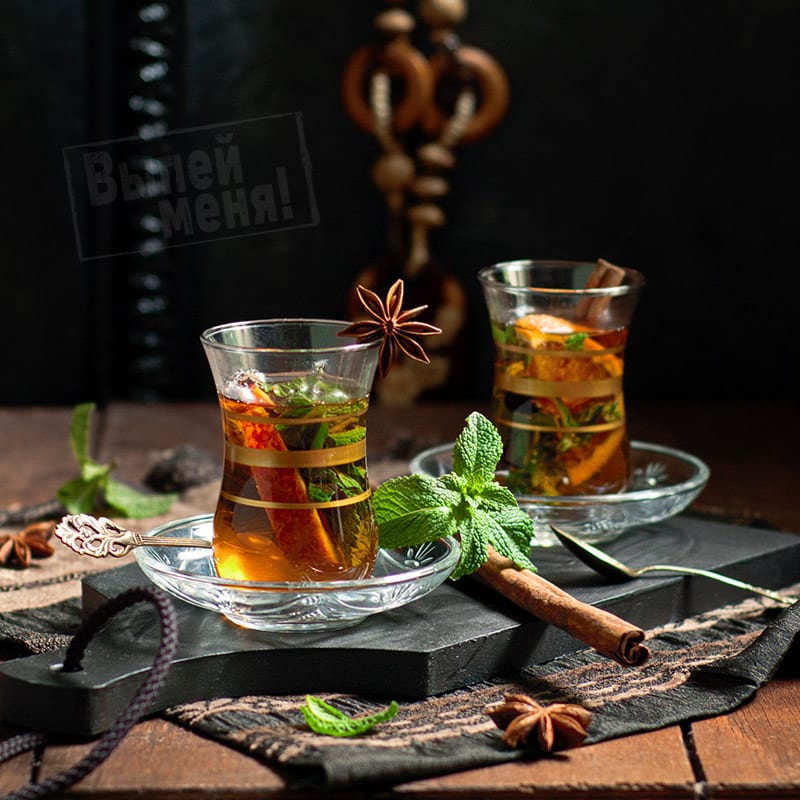 Based on these simple stages, many countries have formed their own traditions of tea drinking.

It is customary to drink a hot tea in China, in small SIPS, without sugar or any additives. The process combines drinking as an act of respect, unity, or apology. The brew is always served to people of younger age or senior status.

In Japan, as in China, they do not add anything to change the tea’s taste and drink it in small SIPS hot or cold. Traditional is drinking green tea after and during meals.

There are nomads and monks in the mountains of Tibet who prepare green brick mixed with butter and salt. The drink is very nutritious and is designed to restore strength after a long movement in the mountains. The reception and welcomed guests, always accompanied by tea. They constantly power the owner pures tea for guests because it is believed that the Cup should not be empty. Just before leaving, the guest must empty his Cup, thereby showing respect and gratitude.

Uzbek tradition of this brew drinking differs a lot from Tibetan. It is customary to welcome guests to pour as little tea as possible to provide more opportunity to contact the host for more and express its respect for welcoming home. In turn, the owner is pleasant and not a burden to pour into a bowl for more tea. For the intruders, they immediately pour a full Cup of tea just once and no longer pour. 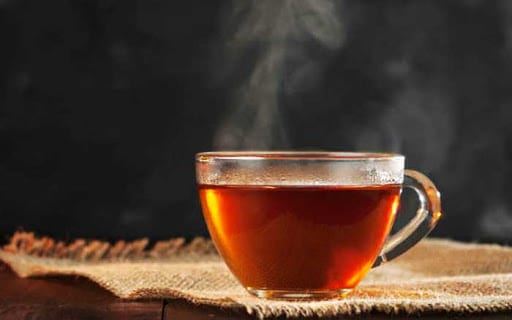 The English tradition of drinking the brew has a great similarity with the Japanese. In England, it is customary to drink tea with milk three times a day: at Breakfast time, lunch (13:00), and dinner (17:00). However, the high degree of urbanization and the country’s pace has led to a significant simplification of the traditions. Basically, they used tea bags, which saves time and does not require a large number of devices (required tea set, Cutlery, napkins, and fresh flowers to match the tablecloth, table, and meals).

Traditionally in Russia, tea is brewed after a meal with boiled water from the “Samovar,” and the teapot stood on the top and is constantly fueled by stimulating the process of extraction of the drink. Often to be found in the process of double brewing the drink. While steep, the drink brewed in a small pot, then they poured small portions into cups and diluted with hot water. This allowed everyone to adjust the strength of the drink individually. It was also decided to pour tea into a saucer and drink with a bit of sugar. However, such an excellent tradition had almost disappeared. They can still be found in remote areas of the country and villages. Basically, now people use tea bags and boil water in conventional gas or electric kettles.

The benefits of tea

Tea affects all vital systems of the human body; it is good for therapeutic and prophylactic purposes. The gastrointestinal strong brewed drink has a beneficial effect on the stomach and intestines’ tone, promotes digestion, kills bacteria, and putrefactive microorganisms, thereby helping to treat dysentery diarrhea, typhoid. Substances located in tea bind and eliminate intestinal toxins. 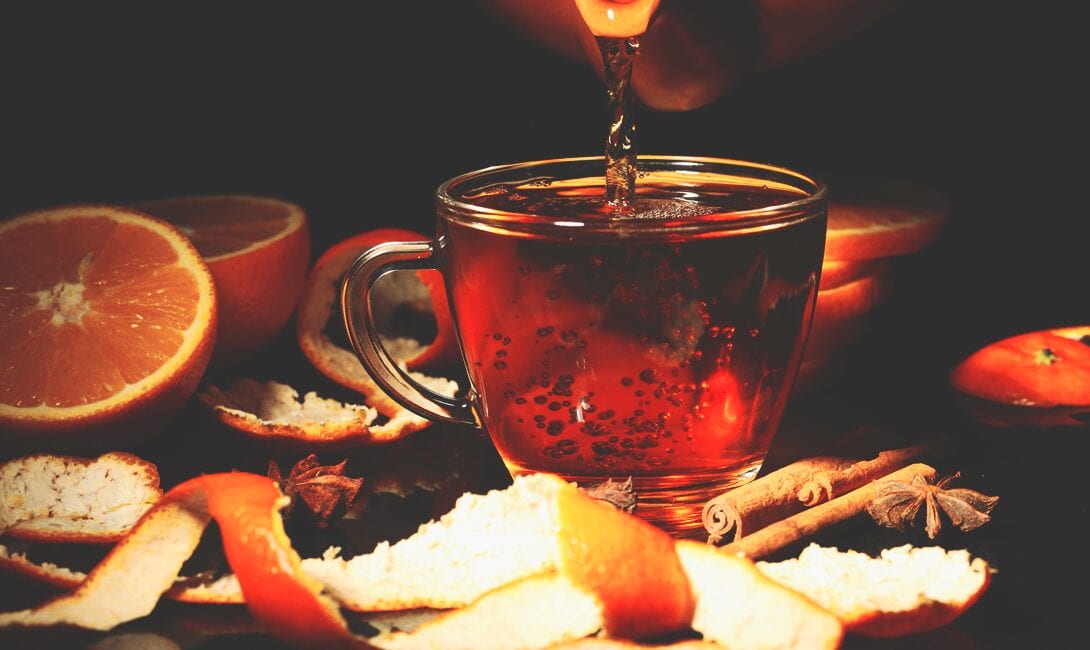 Besides, the caffeine and tannin contained in the leaves have a positive effect on the heart and vascular system. That cases, normal blood pressure, diluted blood, dissolve blood clots, and cholesterol plaques are vascular spasms. Also, systematic consumption of the brew gives the blood vessels elasticity and strength. These tea properties enable scientists to create on its basis drugs to eliminate the consequences of internal bleeding. Theobromine, combined with caffeine, stimulates the urinary system, preventing stones and sand in kidneys and bladder.

Moreover, In the nervous system, tea has a stimulating and toning effect, relieving drowsiness, headache, and fatigue, increasing physical and mental performance.

Firstly, tea in cooking is perfect as the basis for cocktails and other drinks: egg tea, grog, mulled wine, jelly. Secondly, you can use the powder as a spice in cooking dishes in combination with garlic. Also, the tea produces natural dyes (yellow, brown, and green), which are the raw materials for the production of confectionery (jelly beans, caramel, marmalade). Oil of the Bush has strong Physico-chemical properties very close to olive oil and used in the cosmetic, soap, and food industry and as a lubricant for high precision equipment.

The harmful effects of tea and contraindications

Tea, besides a large number of positive properties, has in some cases several contraindications. During pregnancy, drinking green variety, more than 3 cups a day, can inhibit the absorption of folic acid needed for the child’s brain and nervous system’s normal development. Similarly, excessive black tea that contains a lot of caffeine may cause hypertonicity of the uterus and, consequently, premature birth.

People with gastrointestinal disease, associated with high acidity, can’t drink green tea because it increases the level of acid, causing exacerbation of the disease and preventing the healing of ulcers. Also, due to the high content of polyphenols, this type of drink provides an additional burden on the liver.

A sharp narrowing of the blood vessels accompanies the use of tea, so it should be carefully used in atherosclerosis, hypertension, and thrombophlebitis. However, despite the great content in the tea of mineral salts, it provokes bone calcium and magnesium leaching, causing decreased bone density, exacerbation of diseases of the joints and gout.

In conclusion, excessive tea consumption provokes a  hard output of urea, which can provoke the development of gout, arthritis, and rheumatism. It is a poisonous substance formed during the breakdown of purine.