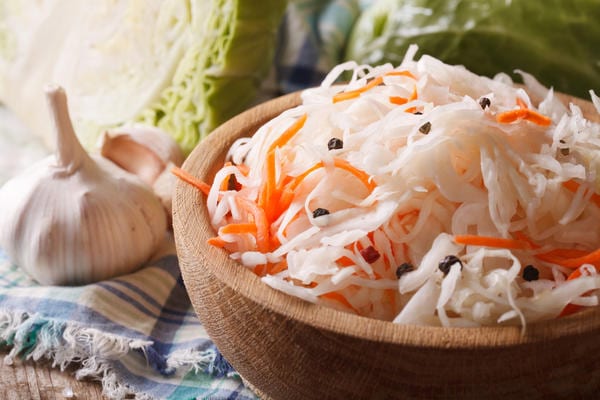 Fermentation was considered one of the most beloved and popular methods of cooking. The regular use of pickled vegetables made this people especially strong and resilient.

Pickling is a type of preservation of vegetables, berries and fruits, during which, under the influence of physicochemical factors, lactic acid is formed, which is a natural preservative.

Apples and watermelons, cucumbers and tomatoes, onions and garlic are subject to pickling, but the main role in this type of preservation belongs, undoubtedly, to cabbage. Cabbage is usually fermented in winter and early spring, as well as late autumn in order to strengthen the body and prevent all kinds of seasonal diseases.

During the Great Patriotic War, sauerkraut on the table was the main dish in many Russian families. Probably, this is what helped the Russian people to preserve the body’s defenses and survive in such a difficult time. We ate cabbage for breakfast, lunch and dinner. And although this dish seemed to everyone already bored, a huge amount of vitamin C, which is contained in sauerkraut, protected the organism of the Russian people, weakened by war and hardships!

For starter vegetables, a solution is used, consisting of 7-8 grams of sodium chloride dissolved in 1 liter of water. For fermentation, barrels were always used before. Today, people are more likely to use enamel pots, and sometimes three-liter jars. You can use other pots, but experts recommend covering them with two layers of polyethylene to avoid contact of pickled vegetables with metal.

After the choice of dishes is made, you can proceed to the preliminary preparation of vegetables.

Vegetables must meet the following characteristics:

Vegetables are cleaned of inedible parts of plants (tops, leaves, husks and damaged parts, which may contain pathogenic microorganisms).

If the size of the vegetable is such that it does not allow you to ferment it whole, it is chopped (for example, cabbage).

After the vegetables are prepared and washed, they are placed in the dishes so that there is little space between them. This is necessary so that the brine can soak all the vegetables well. When the fruits are laid, you can start pouring the brine. Despite the fact that its concentration is 7-8%, in vegetables it will be present in an amount of 3,5 – 4,5%. The brine is prepared by dissolving the required amount of salt in warm water. It is necessary that the brine completely covers the cooked vegetables.

Vegetables filled with brine are placed under oppression (three-liter jar, bottle filled with water). During the fermentation process, some of the brine may leak out. To prevent this, it is advisable to daily remove accumulated gases by piercing the thickness of vegetables with a knife or long fork.

The fermentation process itself takes, on average, from 3 to 7 days. In this case, the temperature in the room should be within 18 -24 ° C. If it is lower, the fermentation time will increase, and at a temperature of about 0 ° C, it stops altogether. At temperatures above + 24 ° C, the development of pathogenic microflora may begin.

Vegetables are checked daily for doneness.

The second method of pickling is suitable for chopped vegetables. Such vegetables are thoroughly grinded with salt, bumped tightly into three-liter jars, or placed in an enamel bowl. And oppression is placed on top (for example, a three-liter jar of water on a large plate). On average, after 3 – 4 days of fermentation, vegetables can be placed in a cool place. The fermented product is ready!

As a result of fermentation, the sugars in vegetables, under the influence of lactic acid bacteria, are converted into lactic acid, which suppresses the development of pathogenic microflora in the body.

The nutritional value of pickled vegetables is unmatched! Fiber remains practically unchanged. The level of sugars decreases, and instead of them organic acids are formed, which have a beneficial effect on the gastrointestinal tract, increase immunity and prevent various infectious diseases, which is very important in the autumn-winter period.

It is not recommended to use pickled vegetables for people who have diseases such as stomach ulcers, gastritis, diverticulitis and other gastrointestinal diseases associated with high acidity.

Everyone else can not only use pickled vegetables, but also very useful!