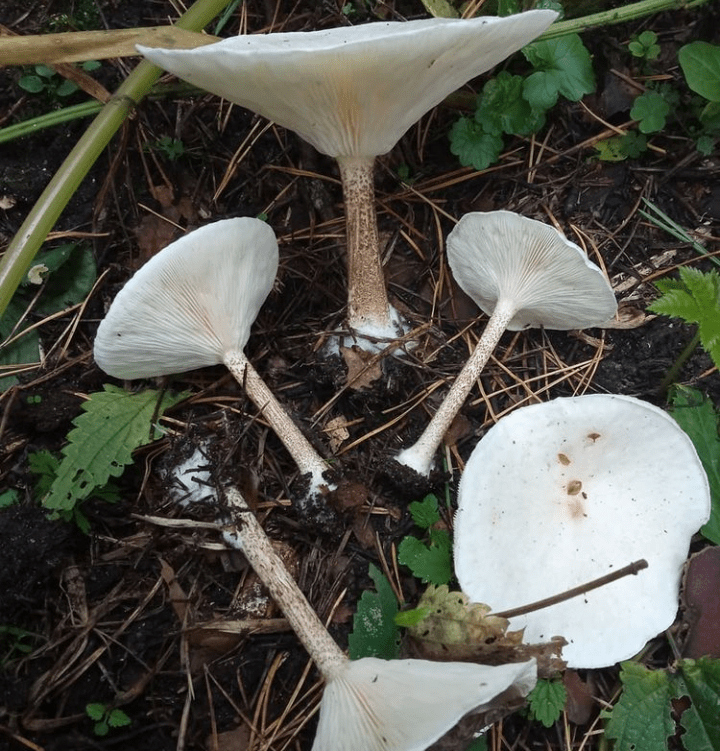 This “Warty Cavalier” was described in 1874 by the Swedish mycologist Elias Magnus Fries, who gave it the name Agaricus verrucipes. Its currently accepted scientific name, Melanoleuca verrucipes, dates back to a publication by Rolf Singer in 1939.

The genus name Melanoleuca comes from the ancient words melas meaning black and leucos meaning white. No Warty Cavalier is truly black and white, but many have caps that have various shades of brown on top and whitish plates underneath.

The specific epithet verrucipes literally means “with warty foot” – “with a warty foot, foot”, and the word “foot”, of course, means “leg”, when it comes to the fungus.

Usually the definition of Melanoleuca to the species is a nightmare. Melanoleuca verrucipes is a pleasant exception, one of the few melaneuca species that can be identified by macro-features without delving into the wilds of microscopy.

The melanoleuca verrucous peduncle differs from its counterparts by a light, almost white stalk covered with small, but quite noticeable dark brown or even black scales, similar to scabs or warts.

head: 3-7 cm in diameter (sometimes up to 10 cm), from white to cream with a pale brown center, the cap is first convex and then flattens, almost always with a small low tubercle, in adult mushrooms broadly convex or almost flat, dry, bald, smooth, sometimes finely scaly. The color is white, whitish, often with a darker zone in the center. The flesh of the cap is thin, white to very pale cream.

plates: widely adherent, frequent, with numerous plates. The color of the plates is white, pale creamy, becoming brownish with age.

Leg: length 4-5 cm and thickness 0,5-1 cm (there are specimens with a stem up to 6 cm long and up to 2 cm thick). Flat with slightly swollen base. Dry, white under dark brown to almost black scabs. There is no ring or annular zone. The flesh in the leg is hard, fibrous.

Pulp: white, whitish, creamy in overgrown specimens, does not change color when damaged.

Smell: slightly mushroomy, slight anise or almond smell possible. They write about the shades of smell, according to various sources: bitter almonds, cheese crust, as well as floury, fruity. Or: sour, aniseed, sometimes peary, may be unpleasant in mature specimens.

Cheilocystidia were not found.

The plate tram is subparallel.

Saprophyte, grows singly or in small groups in soil or wood chips, in humus-rich soil and meadows rich in leaf and grass litter, wood chips or garden compost heaps.

In northern and mountainous Europe, it occurs naturally in grassy areas, but in other parts of Europe it is often found in landscape areas – parks, lawns, squares. In North America, it occurs in the Pacific Northwest and the Northeastern and Mid-Atlantic states, on woodchip and other landscaped areas, or in grassy ditches and along roadsides.

It is highly likely that the worldwide distribution of this species has expanded significantly in recent years due to its transfer to exported potted plants, potting compost, and woodchip garden mulch.

Many mushrooms from the genus Melanoleuca are considered edible, but their taste, frankly, is so-so. Perhaps that is why many European guides list them as “Inedible”, with notes in the style of “since these types of mushrooms are notoriously difficult to identify, we recommend that they be considered all as suspicious, and not collected for food.”

However, it was not possible to find data on the toxicity of Melanoleuca warty-legged. We will place this species in “Inedible”, and not because of reinsurance, but because of the rarity of Melanoleuca verrucipes in the territory of the former USSR. Do not eat it, better take as many good photos as possible. 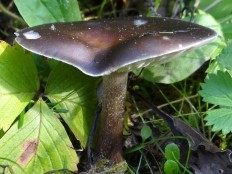 Macroscopically it can be very similar, but it lacks the characteristic dark brown scales on the stem.

Everything you need to know about the raw food diet