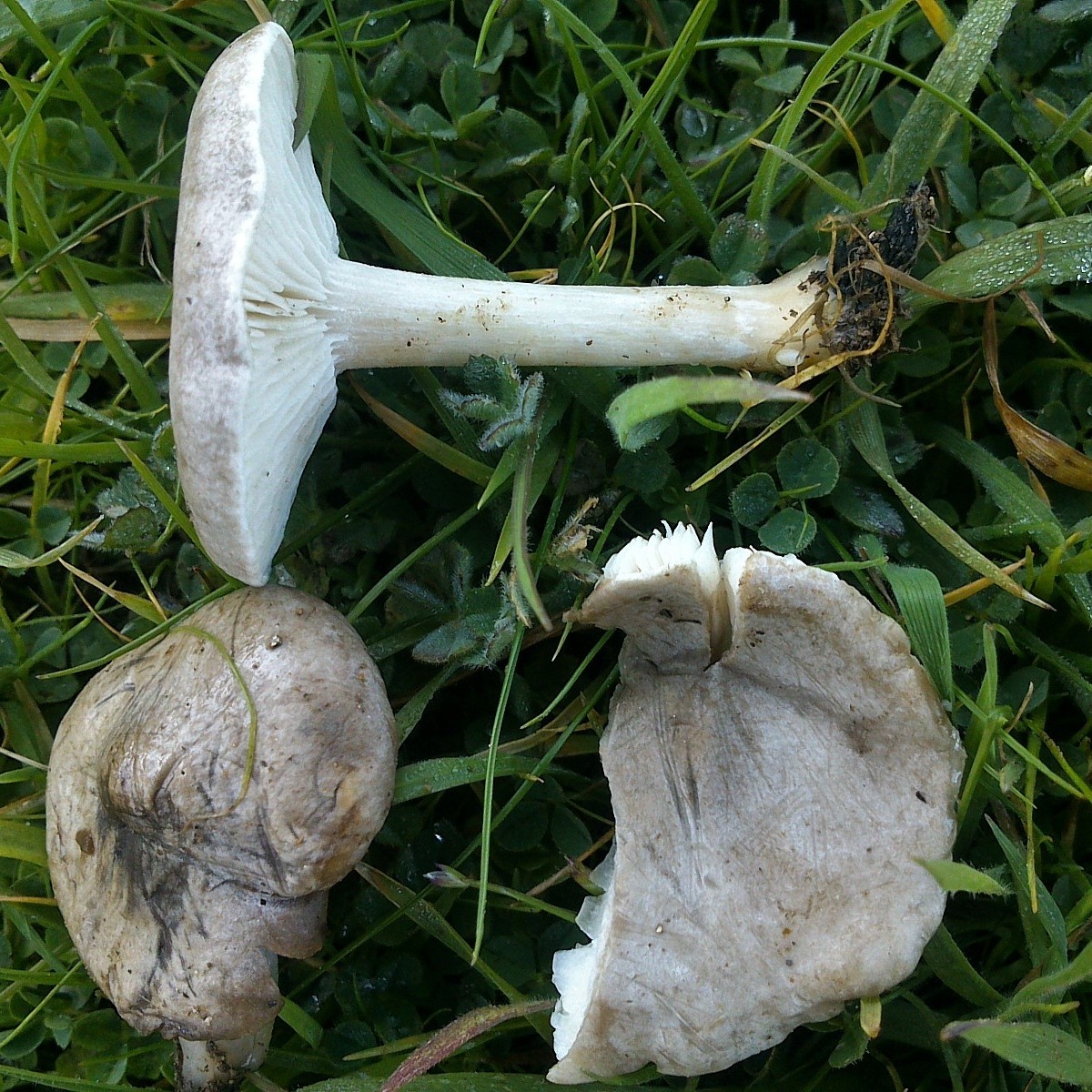 head: 3,5-5 cm in diameter, up to 7 cm under good conditions. In young mushrooms, it is rounded, convex, later straightens to a flat or flat procumbent, may be with a small depressed area in the center. Almost always with a clearly visible small tubercle in the center of the cap. Color brownish, brownish-gray, beige, beige-gray, gray, grayish-whitish. The surface of the cap is abundantly covered with a thin powdery coating, translucent in dampness and whitening when dried, therefore, in dry weather, the caps of Melanoleuca finely pollinated look whitish, almost white, you need to look closely to see a white coating on a grayish skin. The plaque is finely dispersed in the center of the cap and larger towards the edge. 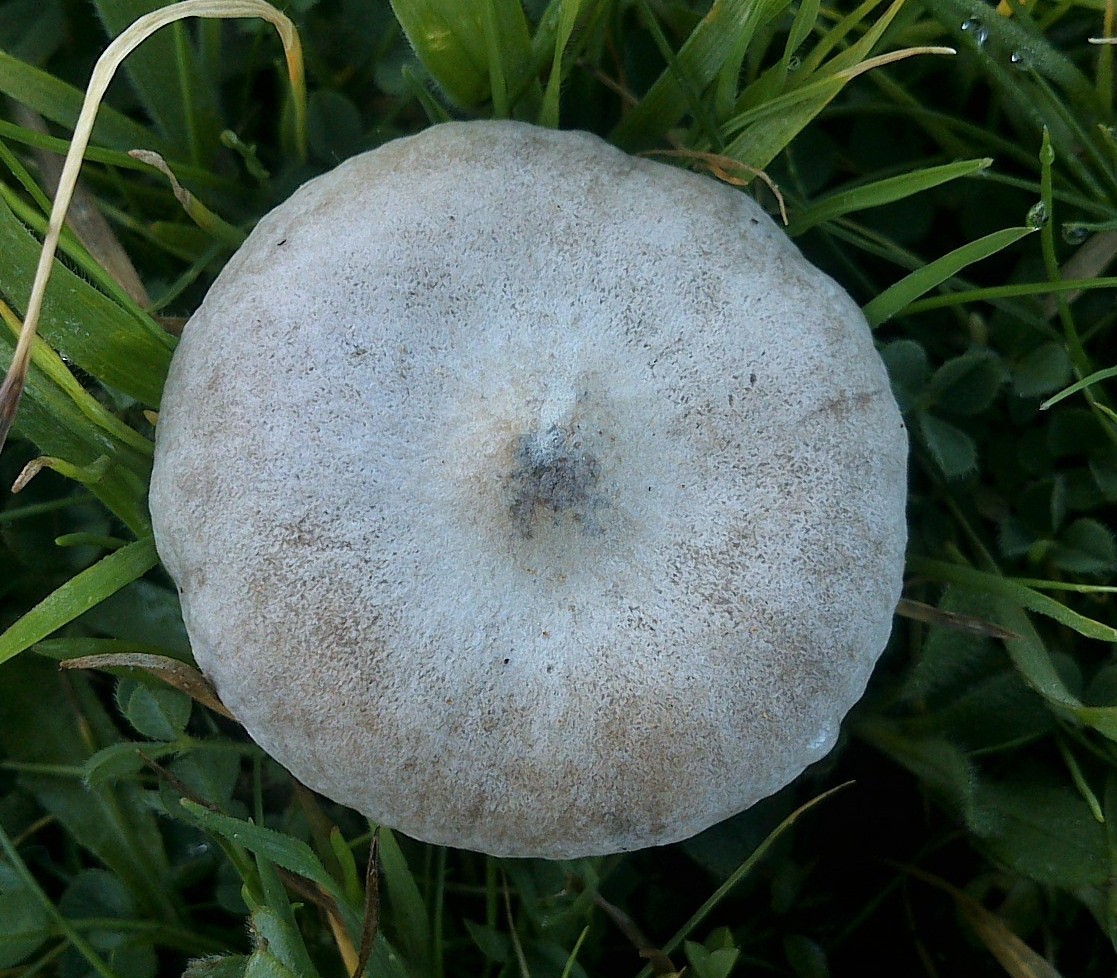 plates: narrow, of medium frequency, accreted with a tooth or slightly descending, with plates. There may be well-defined notches. Sometimes long plates can be branched, sometimes there are anastomoses (bridges between the plates). When young, they are white, with time they become creamy or yellowish.

Leg: central, 4-6 cm in height, proportional in width, may widen slightly towards the base. Evenly cylindrical, straight or slightly curved at the base. In young mushrooms, it is made, loose in the central part, then hollow. The color of the stem is in the colors of the cap or slightly lighter, towards the base it is darker, in grayish-brown tones. Under the plates on the leg, the thinnest powdery coating is often visible, as on a hat. The entire leg is covered with thin fibrils (fibers), like other fungi of the Melanoleuca species, in Melanoleuca subpulverulenta these fibrils are white. 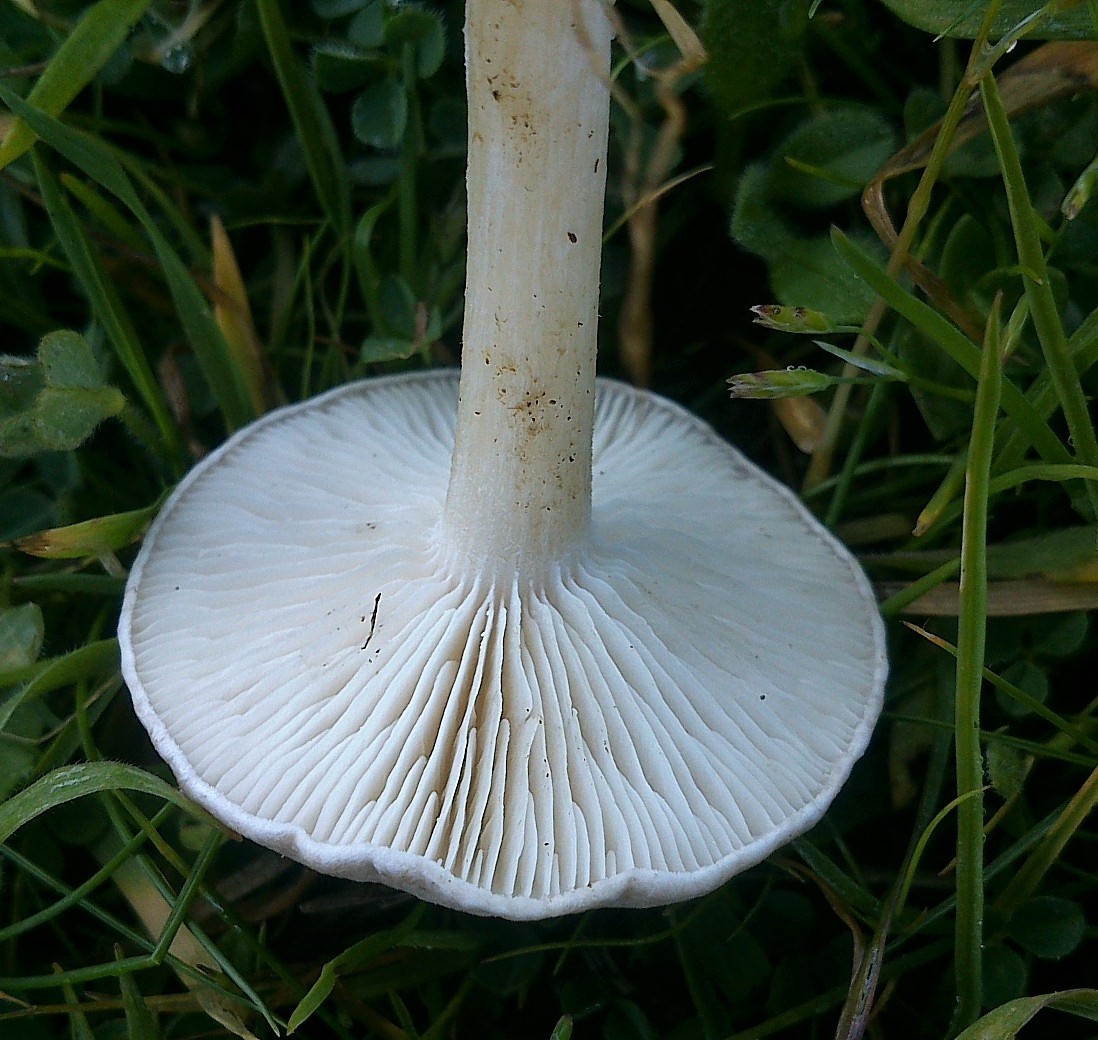 Pulp: dense, white or whitish, does not change color when damaged.

The fungus is rare, with few documented confirmed finds.

Finely pollinated melanoleuca bears fruit from the second half of summer and, apparently, until late autumn. In warm regions – and in winter (for example, in Israel).

The data is inconsistent.

Sometimes listed as “Edible Mushroom of Little Known”, but more commonly “Edibility unknown”. Obviously, this is due to the rarity of this species.

The WikiMushroom team reminds you that you don’t need to test the edibility on yourself. Let’s wait for the authoritative opinion of mycologists and physicians.

While there is no reliable data, we will consider Melanoleuca finely pollinated as an inedible species.

Headache: relationship with diet and prevention

5 tips for safe exercise during pregnancy