Is ketchup good for your health? 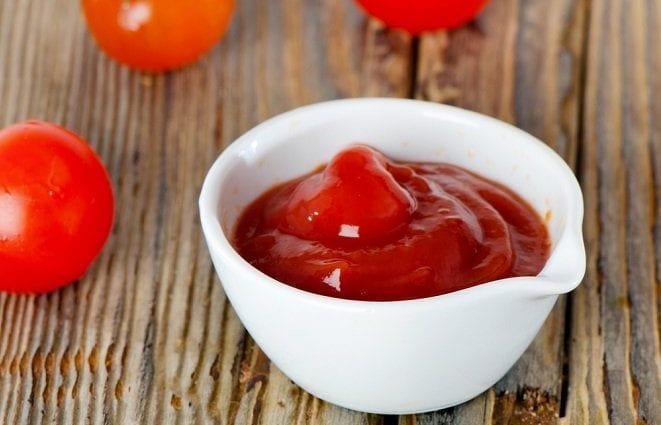 It’s hard to find a sauce that could overtake the popularity of ketchup. Its fans claim that it is possible to eat everything with it. Children are ready to dip in ketchup, even bananas, and American Housewives clean the antique copper pots with it.

Many people mistakenly think that ketchup is useful because it is made of tomatoes. In fact, this sauce is far from the title of a dietary product.

A bit of history

According to some sources, the ketchup appeared in 1830, when one of the farmers of New England were filled with pureed tomatoes in a bottle and sold them as such.

This method of storing tomato sauce quickly became popular. By 1900 only in the US, there were about 100 different manufacturers of ketchup.

Due to the unusual convenient package ketchup began its journey on the planet. Now without ketchup it is impossible to imagine neither burgers, no fries, no sausage in a bun.

The main argument in favor of ketchup still remains a key ingredient – tomatoes.

Useful berries contain carotenoid lycopene, which gives tomatoes their bright red hue. This antioxidant reduces the risk of developing cancer, heart disease, osteoporosis and even improves the quality of sperm.

Unfortunately, the amount of lycopene in processed tomato ketchup in comparison with the fresh tomatoes is rather small. So this myth about the use of ketchup, remains a myth.

Another argument in favor of ketchup – a low calorie content and the presence of useful fiber.

Really the tablespoon of ketchup (15 g) contain only about 15 calories. But most of it falls on about four grams of sugar.

But proteins, fats and fiber in the tomato ketchup, prepared by the standard technology is almost there. As well as vitamins. For comparison, a slice of tomato of the same weight has  five times less calories.

Four out of five calories in the ketchup belongs to added sugar.

This means that the ketchup is at least 20 percent consists of sugar, which in some cases is cleverly disguised on labels under fructose, glucose or corn syrup.

One tablespoon of ketchup can contain up to 190 milligrams of sodium.

On the one hand, it is less than ten percent of the daily requirement of micronutrient for a healthy person. On the other hand, who is limited to one tablespoon?

In combination with other sources of salt consumption of ketchup is contributing to its excessive consumption.

In the traditional recipe of tomato ketchup usually comes with a vinegar or other acids. So the sauce is banned for those who have diseases of the stomach and intestines. For this reason, it is contraindicated for children.

By the way, the shining copper pots of American Housewives – the result of just acetic acid.

How to clean your kettle with ketchup. Keeping the house clean. Tips and Tricks

Talking about the relative “value tomato” ketchup can only go in if the manufacturer hasn’t diluted the tomatoes that went into its production, with the concentrate of other vegetables.

In some cases, unscrupulous manufacturers do replacing vegetables with a cocktail of thickeners, dyes, flavors and fragrances.

Spices that are often added to ketchup. It is ok, of course, in that case, if they are not enhances the taste of monosodium glutamate. This Supplement is harmless in itself, but is addictive to those dishes where it is added.

Ketchup is not as high in calories like mayonnaise, but may contain a quarter of mass of sugar. In addition, it contain too much salt.

Imaginary benefits from this sauce are balanced by its damage.

Thus, it is possible to speak only about the relative harmlessness of ketchup and eat it in small quantities.