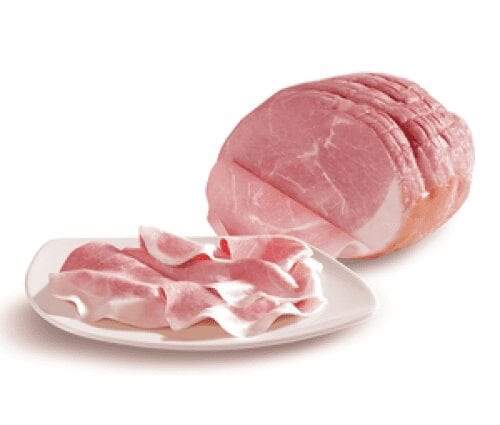 Depending on the method of preparation, ham can be boiled, boiled-smoked, smoked-baked, uncooked smoked and dry-cured, and the difference between all its types is determined simultaneously by the method of processing pork, and its breed, and regional ideas about the ideal quality and taste, as in case with Parma, for example.

The main thing is different: ham is an absolutely irreplaceable product in the kitchen that can replace or supplement meat, solo in hot and cold dishes, or even perform a purely decorative function.

Boiled ham is most often prepared from pork ham with the addition of onions, carrots, roots and spices, and before that it is aged in brine, which gives the meat a soft and uniform consistency.

The production technology is as follows: pork leg is soaked in marinade or brine for several hours, then smoked for a long time, and then cooked with spices. Cooked-smoked ham usually has a pale pink color and a golden, rough crust.

Black Forest ham is a Black Forest raw smoked ham with an intense aroma and a coarse black-brown crust, which is formed by smoking on spruce sawdust and cones and subsequent long-term processing at high temperatures.

Bresaola is an Italian cured ham made from pickled beef that matures in the fresh air for eight weeks and takes on a noble flavor. At home in Lombardy, bresaola is very often used to make carpaccio.

Turkey fillet, like pork leg, is soaked in marinade or brine for several hours, after which it is boiled with the addition of herbs and spices. Turkey ham is low-fat, almost dietary.

Serrano ham is the same ham, it differs from the Iberian in the breed of pigs and their diet. The serrano jamon has a white hoof, not a black one.

The pork leg in the production of real York ham is first salted dry, without soaking in brine, and then smoked and dried, which makes the meat so dense and durable that it can even be stewed.

Almost all types of hams are lightly smoked hot and cold, and, in the cheapest version, with liquid smoke. A small slice of ham, toasted with onions, will add smoked flavor to your soup or stir-fry.

Smoked ham on the bone

Ham on the bone has a richer and more complex taste, since the bones during processing additionally flavor and refine the meat. It is necessary to cut such ham carefully: the bone often softens so much that it crumbles and can get into food.

Parma ham is a dry-cured ham from Parma, for the production of which only three breeds of pigs are used, grown strictly in the regions of Central or Northern Italy, the carcasses of which weigh at least 150 kg. The meat is kept in a special brine for three weeks, and then dried in the mountain air for 10-12 months. As a result of this treatment, a pork leg weighing 10-11 kilograms is reduced in weight to seven.

Prosciutto in Italian means “ham” – and apart from the ham itself and salt (and clean mountain air) nothing else is used for the production of prosciutto.

Jamon, or Iberian ham, is the main Spanish meat delicacy, and its main producer is Jamón de Trevélez. In 1862, Queen Isabella II of Spain tasted Treveles jamon and allowed the ham to be stamped with her crown. The city of Treveles is located at an altitude of 1200 meters, and, apart from salt, air and pork, no other components are used in the production of this type of dry-cured ham.

Ham is not a healthy food. It stimulates the appetite, is a nutritious and nutritious snack often found on the festive table. Even healthy eating haters cannot resist the excellent taste of ham.

Cured and smoked meat foods, when abused, contribute to the occurrence of chronic obstructive pulmonary diseases. American scientists have found that people who prefer ham, raw smoked sausages and sausages, bacon are prone to emphysema and chronic inflammation of the bronchi.

At Columbia University, researchers surveyed 7,352 participants. The age of the participants in the study averaged 64.5 years. The questionnaire included questions related to the diet of people.

According to project manager Rui Jiang, it turned out that people who consume meat foods more than 14 times a month are 78% more likely to suffer from chronic obstructive pulmonary disease. And if the consumption of meat foods is reduced to 5-13 times a month, the probability of diseases increases only up to 50% in comparison with people who do not consume these foods.

This effect is explained by the fact that nitrites are added to such meat foods as preservatives, antimicrobial agents and to fix the color. And high concentrations of these substances can damage the lungs.

The chemical composition of ham is characterized by a high content of proteins, fats, ash, vitamins (A, B1, B3, B5, B9, B12, C), macro- (potassium, calcium, magnesium, sodium, phosphorus) and microelements (iron, manganese, copper , zinc, selenium).

When choosing a ham, there are a number of factors to consider. First of all, it is the appearance of this meat delicacy. Its casing must be undamaged, dry, smooth and clean, tightly fitting to the contents. In addition, you need to pay attention to its type. Manufacturers currently use natural or artificial casings.

The first is edible and has some nutritional value, and in addition allows the contents to “breathe”. At the same time, natural-cased ham has a shorter shelf life. The main disadvantage of the artificial casing is its tightness, due to which moisture forms under it, which can negatively affect the organoleptic properties of the ham.

Another factor in choosing a ham is the color and uniformity of its cut. The highest quality foods are distinguished by dim shades of light red, without any gray spots. In addition, you should pay attention to the aroma. The ham has a characteristic smell, without any impurities.

The shelf life of ham varies considerably depending on the production technology, the ingredients used, the type of casing and the quality of the packaging. The optimum temperature for storing this meat delicacy is 0-6 degrees Celsius.

Under such conditions and in the absence of damage to the casing, it can retain all its original organoleptic qualities for 15 days. The shelf life can be extended to 30 days if the ham is frozen. At the same time, it is important to observe a certain temperature regime – not higher than minus 18 degrees Celsius.

What is ham combined with

Ham is everyone’s favorite meat dish. Ham can be served on a festive table, as well as supplement the family menu with it on weekdays. Although you can buy ham at any store, the taste of homemade meat cannot be compared to it. Having cooked the ham at home, you can be 100% confident in the quality of meat and spices, because the composition will not contain preservatives and other harmful additives. Italian ham deserves special attention, it turns out to be especially aromatic and juicy.

Try it! This is incredible!