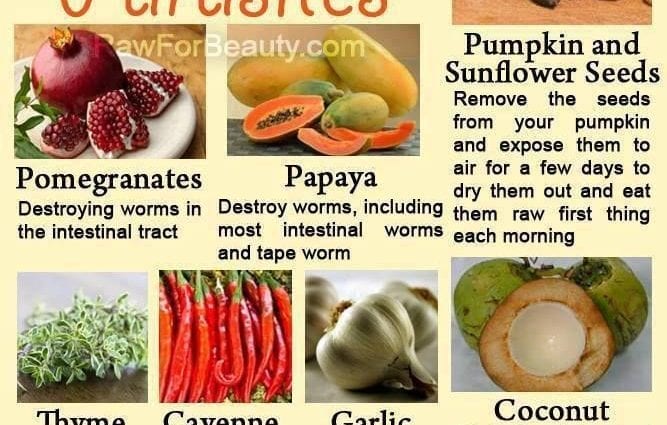 It’s hard to believe, but headaches, frequent colds, depression, decreased libido, a banal rash and even dandruff can actually be the result of helminths or parasitic worms entering the body. Moreover, it is not so easy to withdraw them in some cases. That is why nutritionists recommend regularly using antiparasitic products for the prevention and treatment of helminthiasis. Moreover, most of them are always at hand.

What you need to know about helminths, or intestinal parasites

Helminths are multicellular organisms, which are popularly referred to simply as worms. Several hundred species of helminths are known to modern science. They can live in the human body for years, poisoning it with the products of their vital activity. Just imagine: according to the WHO, there are now about 3 billion people in the world suffering from helminthiasis, and not all of them live in third world countries.

Contrary to the popular belief that helminths live only in the intestines, they are found in the blood, and in muscle tissues, and in the lungs, and in the liver, and in the eyes, and even in the brain. But the most interesting thing is that a person most often does not notice their presence until the moment when their number is counted in colonies and becomes critical.

But the presence of helminthiasis, in addition to the above symptoms, is indicated by:

The most common causes of worms entering the body are unwashed hands, dirty vegetables, fruits, contaminated meat and water. To combat them, traditional medicine uses drugs, which in practice are prescribed to people at risk (children and the elderly) about once a year. The unconventional one resorts to the help of a special diet.

The essence of the antiparasitic diet is to introduce foods with certain vitamins and microelements into the diet, which help to increase immunity and have a positive effect on the digestive tract. This is about:

Garlic – its miraculous properties have long been legendary, and this is not surprising. Indeed, it contains a special substance – allicin, which, among other things, effectively fights parasites, including roundworm and lamblia.

Pumpkin seeds – they were used by our grandmothers, sometimes without even knowing that the secret of the success of this product lies in the presence of zinc and cucurbitin. The latter paralyzes parasites and prevents them from fixing on the intestinal walls.

Pomegranates are a source of potassium, iron, antioxidants, fiber and vitamin C. The product helps to remove toxins and toxins from the body, normalize the digestive tract and increase immunity. Traditional medicine uses pomegranate peel to combat worms. However, doctors do not approve of this method, since if the prescribed daily dose is exceeded, serious consequences are possible, including hypertension, dizziness and nausea.

Horseradish – It also contains allicin, which can fight parasites.

Cayenne pepper is an incredibly hot spice used in Mexican and Asian cuisines. It contains vitamins A and C, therefore, it increases immunity, improves the functioning of the gastrointestinal tract and metabolism, effectively fights against microorganisms and parasites, and even promotes wound healing.

Turmeric is another spice with similar properties. You can replace it with cinnamon, cardamom, or nutmeg.

Onions are a source of allicin.

Papaya – of course, this is not the most common fruit in our country, however, it is incredibly effective. It contains a huge amount of useful substances, including myrosin, carpain, caricin, etc. But to remove worms, it is necessary to use papaya seeds. They not only effectively fight them, but also help restore the digestive tract after their presence. Interestingly, scientists from the University of Maryland advise “mixing papaya seeds with honey for maximum effect.”

Carrots or carrot juice are a source of vitamin A and fiber, which improve gastrointestinal function and also fight worms. That is why doctors often include carrot juice in antiparasitic therapy.

Cranberry juice is a source of vitamins and minerals, which also enhances immunity and cleanses the body of worms. The main thing is that it should be savory.

Pineapple – it contains bromelain – a substance that destroys the waste products of parasites. By the way, there is an opinion that it is capable of completely destroying tapeworms in 3 days, provided that it is regularly consumed. But this is not the only beneficial property of pineapple. The fact is that this is a rather sour fruit, and worms need glucose, in the absence of which they die safely.

Thyme, or thyme – tea is brewed from it, with the help of which tapeworms are removed from the body.

Blackberries – these berries are mentioned in her book “Guess What Came to Dinner” by Anna Luis Gittelman, talking about foods that have antiparasitic properties.

Oil of oregano (oregano) – it contains two miraculous substances – thymol and carvacrol, which have antimicrobial and antiparasitic properties.

Almonds – it not only prevents the multiplication of parasites in the body, but also effectively cleanses it of them. And this is explained, according to scientists, by the high concentration of fatty acids in it. Along with this, almonds have sedative properties and relieve irritation of the stomach walls.

Clove – it contains tannins that destroy eggs and larvae of worms and, therefore, prevent their reproduction. That is why it is very often used to prevent helminthiasis.

Lemon – has antimicrobial and antiparasitic properties. To achieve the maximum effect, experts advise using it together with a banana. The latter is a natural laxative that improves the digestive tract.

Broccoli – According to nutritionist Phyllis Balch, “it contains a thiol, which has antiparasitic and antifungal properties.”

Yogurt is a source of probiotics that improve the functioning of the digestive tract, increase immunity and prevent the multiplication of parasites.

Ginger – it not only has antiparasitic properties, but also improves metabolism and digestion, and also removes toxins from the body. That is why in Japan it is put on sushi.

How else to protect yourself from parasites

Helminthiasis is an insidious disease that can affect all people, regardless of their position and status. Moreover, in the 21st century they not only suffer from it, but also die. However, this is not a cause for panic! Rather, the need to think about and, finally, introduce antiparasitic foods into your diet.

Monitor your health, carefully plan your diet and be healthy!

You gave up meat. What to do next?