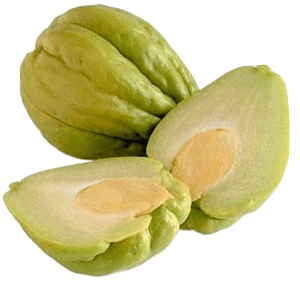 Chayote is an edible or Mexican cucumber (lat. Sechium edule, pumpkin family) – a thermophilic, liana-like vegetable plant, well known in countries with tropical and subtropical climates as a valuable food crop. The homeland of chayote is Central America, where the Aztec and Mayan tribes have grown since ancient times. Today, this plant is growing everywhere in areas with tropical and subtropical climates.

It is trendy among many peoples due to its high yield, nutritional, gustatory, dietary (its calorie content is 19 kcal / 100 g), and medicinal properties.

The growing season of chayote is at least 180 days, so it grows as an annual climbing herb in cooler climates. The length of the chayote stems reaches 10 – 20 m and more, and therefore it is necessary to take care of the arrangement of supports or trellises in advance.

Sometimes low temperatures do not allow harvesting since there is not enough heat for fruit ripening. Due to the decorative properties of the plant, people use it as a decoration for arbors, arches, alleys, terraces, galleries. In areas where the temperature does not drop below + 20 ° C for 6 – 7 months in a row, chayote is a perennial liana (it can grow in one place for up to 20 years), the stem of which becomes lignified in the third-fourth year of life.

Fruiting begins in June and can continue even in December, subject to warm weather. The crop yield, in this case, is on average up to 80 or more fruits per season.

Chayote fruits weigh from 0.2 to 1.0 kg, can have a green, yellow-green, sometimes purple color, and come in various shapes: cylindrical, spherical, pear-shaped, conical—their most common pear-shaped form. The fruit’s skin is dense and thin; the pulp is juicy, soft, slightly sweet in taste.

Inside the fruit, there is a single, flat, oblong bone 3–6 cm long and 3–4 cm wide, resembling an enlarged pumpkin seed. In addition to the top fruits, tubers (up to 10 pcs.) Total weight of no more than 10 kg forms on the root system of chayote. They are rich in starch and also have nutritional value. Dig them out after harvesting the fruit.

Chayote Mexican cucumber can harm people with individual intolerance. This vegetable has no other contraindications.

What does chayote contain?

All parts of the plant (except the stem) are edible, and people use them to prepare delicious dietary meals. It is popular to biol young shoots like asparagus or use in salads together with leaves. The fruits are delicious when not ripe. You can eat them in the raw form combined with other vegetables, boil, fry, pickle, bake, salt them. Root vegetables fried in oil taste like potatoes with mushrooms; besides, they are good to make flour.

Seeds with a delicate nutty taste are trendy among culinary experts. Young plant roots that you may boil or pickle are also a delicacy. The stem also does not remain without application; it manufactures wonderful silvery filaments, which people use to weave various products. Old parts of the plant (tops, roots, fruits, tubers) are good for livestock feed.

Chayote is popular not only for its taste and nutritional qualities but also as a remedy for diseases of the cardiovascular, digestive, and genitourinary systems. It is helping in the treatment of colds as a diaphoretic diuretic. It is successfully used in case of thyroid problems and to lower blood pressure.

Eating fruits helps to eliminate cholesterol from the body. The plant is also used to remove stones from the kidneys. Modern developments of pharmaceutical companies that are using the healing properties of chayote are succeeding in making drugs to prevent cancer. Chayote drugs also help recover from radiation and chemotherapy.

In gynecology, chayote is known as a remedy for mastopathy, fibromic, myoma, and other neoplasms. It is working well to treat adenoma and prostatitis.

Chayote is a single plant, pollinated by insects or by hand, unusually sensitive to temperatures and humidity, prefers nutritious, well-drained soils with a neutral reaction, reacts very poorly to cold (stops growth if the temperature drops below + 20 ° C), lack of lighting, wind loads, excess moisture (roots are afraid of getting wet, especially in spring).

Chayote belongs to short-day crops; therefore, in our conditions, its flowering begins at the end of July – August, when daylight hours will be reduced to 12 hours. To regulate this process, the plant is covered with a dark film. Thus, it is possible to shift the time of flowering and ripening of fruits to the period of the most favorable temperatures.

How to clean chayote

As you may see in the photos, the chayote is covered with a prickly rind, which you should remove for use in cooking. And, you should also remove the inner seed.

There is more than one way to clean chayote, and today I will share two of them with you, along with some tips.

For the first method, stock up on a thick glove or thick towel, through which chayote thorns will not pass. Wrap the fruit in a towel, scrape off the thorns from it with a knife, and then peel the skin with a knife for peeling root vegetables.

This method is better for unripe fruits, which still have a fairly soft skin.

Instead of a root vegetable knife, you can use a regular knife, peeling the chayote like a pear or apple.

Holding the fruit in the center with a fork, cut off its two end parts, call them “nose and tail,” then place the chayote vertically, stick the fork on top, and cut the peel around the entire perimeter of the fruit. Next, trim off the remaining rind from the bottom of the chayote.

Cut the fruit into quarters and remove the inner seed. Now you can chop the chayote as your recipe calls for. It is essential to remember that chayote secretes a lot of slimy juice, becoming covered with it during the skin’s cutting, making the fruit difficult to manipulate. To avoid home injury, you can wear latex gloves, prick the chayote with a fork, wrap it with a paper or cloth napkin, or rinse the chayote and your hands frequently under running water.

It is advised to use young fruits with a shiny peel for food since an overripe vegetable will be tough. You can buy chayote from June to the end of October. Besides, you can find canned and pickled fruits in stores.

It’s optimal to store chayote for up to a month at a temperature of about + 10˚С. You may store vacuum packed in the refrigerator for the whole winter.

The use of chayote in cooking

Different parts of the vegetable are used in different ways. You may boil young shoots of chayote like asparagus in salt water and then use them for soups, side dishes, and salads. You may boil the roots too, but only while the chayote is young. In the future, you may use them as livestock feed.

The green leaves make a good ingredient in sauté or vegetable stews. Chayote tastes a bit like potatoes, so the options to prepare it are similar to classic potato recipes. On the other hand, because this vegetable is distributed mainly in countries with a different culinary culture, there are original recipes for its use.

For example, finely grated chayote pulp often becomes the basis for various soups. The fruit is not eaten raw: unlike ordinary cucumbers, they are tougher. But in any other form, this vegetable is great, as it has a pleasant nutty taste. Popular dishes include chayote soup, a stewed vegetable stuffed with rice, meat or cottage cheese, boiled shoots, soufflés, desserts with chocolate and honey.

Sauce and other combinations

The sauce is also interesting, which contains chayote, onion, eggplant, and tomato. And mushroom lovers like to fry shoots – they have a similar taste. One of the most popular recipes is to cut chayote after peeling and boloing, adding the butter, and serving hot. This vegetable goes well with tomatoes, eggplants and makes a delicious puree that you may serve as a side dish.

There are many different combinations of chayote with other foods: it goes well with many vegetables due to its neutral taste. Traditional Mexican spices such as cayenne pepper or tabasco are added to these dishes. A large amount of oil helps to soften the spice and enhance the overall juiciness of the chayote. The combination of Mexican cucumber with fruit is also unusual. For example, it is used along with cinnamon and apples in pies – in this combination, chayote also becomes sweet. The fruit contains a lot of starch, so flour is often made from it.

Try to pickle and can chayote

Among other things, people pickle and can the chayote. For preservation, you need to choose good fruits without any damage, immerse them in cool water, dilating a little citric acid. If the fruits are too large, you should cut them. Stack them in jars in layers (a layer of chayote – a layer of spices, and so on). Use garlic, dill, horseradish leaves, black pepper, parsley roots as seasonings. Then pour the vegetables with brine (80 grams of salt per liter of water), cover the jars with lids, and then left for 2 weeks. As soon as fermentation stops in the jars, they are sealed with sealed lids.

In Asia, chayote is a must-have ingredient in many hot or vegetable salads. And in Mexico and Africa, people add its pulp when baking goods.

A Mexican cucumber differs from the usual cucumber in that it has only 1 seed, and the taste is quite similar to a cucumber. Baked chayote tastes like zucchini. It turns out even tastier.

This salad can be seasoned with butter or mayonnaise, I served with mayonnaise.

Check out chayote kimchi recipe in the video below: