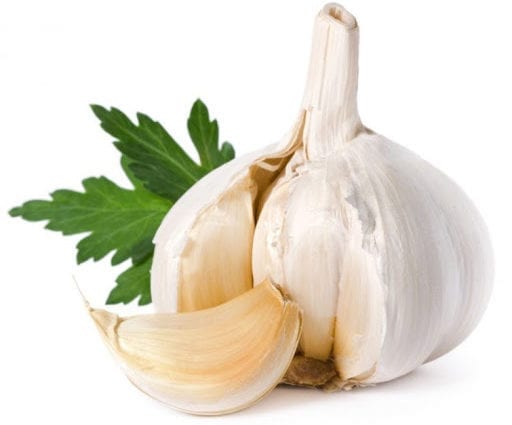 Garlic is a perennial herb from the Amaryllidaceae family, native to Central Asia, with a pungent taste and strong specific odor.

This is one of the oldest vegetable crops. It is mentioned as early as 2600 BC on clay tablets of the Sumerians. Garlic is a magical plant, and people used it to save crops from pests. According to Egypt’s legend, the pharaoh introduced a portion of garlic into the daily diet of the slaves who built the pyramids to maintain their physical strength.

The Greeks used the vegetable with honey to treat lung disease and to improve male fertility. In Rome, legionnaires wore garlic on their chest like a talisman and used it as an antibacterial and antiparasitic agent.

In Europe, people considered garlic to be a magical and medicinal plant, used it to treat the plague, and fight evil spirits. The first scientific study of garlic, carried out in the middle of the 19th century by Pasteur, proved the vegetable’s antibacterial properties – microbes did not grow in the areas around the slices.

People used garlic as a solution to fight infections during the First World War. The vegetable appeared Europe in the 9th century.

The Spanish city of Las Pedronieras is officially the World Capital of Garlic.

The benefits of garlic

Garlic contains many useful substances: potassium, calcium, phosphorus, vitamins B and C, selenium, manganese, iodine, and essential oils. At the same time, this vegetable is a fairly high-calorie product – 100 g contains 149 kcal. But if you consume this spicy vegetable in small quantities, it will not harm the figure. However, garlic can increase your appetite.

Garlic contains phytoncides – volatile substances that protect the plant from parasites and bacteria. When people consume phytoncides in food, the body gets bactericidal, antiparasitic, and antifungal effects. As a result of the study, scientists proved that the group of people who regularly consumed garlic – had three times fewer colds than those who did not eat garlic.

Garlic has a positive effect on the work of the cardiovascular system. Regular consumption of this vegetable helps stimulate blood formation and lowers blood pressure and cholesterol levels. Reduces the risk of thrombosis and blood viscosity. The vessels’ condition affects the ability to absorb oxygen, endurance, and the rate of blood flow to the organs. Therefore, garlic affects the sexual function of men.

In addition, this vegetable promotes the production of the male sex hormone testosterone.

Garlic reduces the likelihood of cancer. The vegetable contains the compound alliin, which is found in the cytoplasm. When a clove of garlic is cut, the cell integrity is disrupted, and alliin reacts with the cellular enzyme alliinase. As a result, the substance allicin is formed, which gives garlic its specific smell. The substance is not absorbed by the body and is excreted in sweat, urine, breath.

Allicin is an antioxidant and may help prevent lung cancer development, as Chinese scientists have found. The substance kills cancer cells and reduces the likelihood of infectious processes in the respiratory system.

This vegetable contains powerful substances, an excess of which can lead to undesirable consequences. It would help if you were extremely careful to eat it and not exceed a reasonable rate since an excess of phytoncides in the body can lead to poisoning. It would help if you did not eat garlic on an empty stomach and people with exacerbations of gastrointestinal diseases so as not to provoke heartburn or cramps.

This vegetable stimulates appetite, so you need to limit its use during diets. For epilepsy, it is better not to eat garlic, as it can trigger an attack. Be wary of giving this vegetable to children and allergy sufferers, especially fresh.

The use of garlic in medicine

Pharmaceuticals offer herbal medicines with garlic in the form of powder in capsules and tinctures. The drugs are treating colds, inflammatory processes, diseases of the cardiovascular system, and the complex treatment of cancer.

The tincture is also used externally to combat calluses and purulent inflammations of the skin. Despite the natural composition of the drug, you do not need to self-medicate. Before use, you must consult a doctor to control the dosage and method of application of the drug.

Use in folk medicine

People use this vegetable in folk medicine all over the world. Indians use it to treat asthma, the French – influenza, Germans – tuberculosis, gastrointestinal diseases, and even baldness. In traditional oriental medicine, garlic is a food that improves metabolism and stimulates the digestion process.

The beneficial effects of garlic on the cardiovascular system were noted in a 2007 study. The interaction of garlic components with red blood cells causes vasodilation and lowers blood pressure. American scientists have found that garlic extract destroys plaque in the arteries and helps prevent heart attacks.

Diallyl sulfide makes the vegetable effective against bacteria that cause foodborne illness. On its basis, scientists plan to develop an antibacterial drug.

The anti-cancer properties of allicin in garlic have been confirmed by research from the University of California. In the process of experiments with gamma – irradiation of leukocytes, it turned out that cells cultured in garlic extract retained their viability, in contrast to cells living under normal conditions. Thus, garlic preparations are good prophylaxis for people interacting with ionizing radiation.

People use garlic in cosmetology widely. The extracts and pomace from garlic are components in products for hair loss, warts, fungal diseases, and inflamed skincare. Garlic’s antifungal and bactericidal properties make it effective against these diseases.

In folk medicine, there are many recipes for garlic masks, but you should use it only after consulting a dermatologist to avoid burns and allergic reactions.

The beneficial effects the vegetable provides on the cardiovascular system appeared in multiple studies. The interaction of garlic components with red blood cells causes vasodilation and lowers blood pressure. American scientists have found that garlic extract destroys plaque in the arteries and helps prevent heart attacks.

Diallyl sulfide makes the vegetable effective against bacteria that cause foodborne illness. On its basis, scientists plan to develop an antibacterial drug.

The anti-cancer properties of allicin in garlic have been confirmed by research from the University of California. In the process of experiments with gamma – irradiation of leukocytes, it turned out that cells cultured in garlic extract retained their viability, in contrast to cells living under normal conditions. Thus, garlic preparations are good prophylaxis for people interacting with ionizing radiation.

Garlic is also used in cosmetology. Extracts and pomace are found in hair loss products, warts, fungal diseases, and inflamed skincare. Garlic’s antifungal and bactericidal properties make it effective against these diseases.

In folk medicine, there are many recipes for masks with adding our vegetable, but they should be used only after consulting a dermatologist to avoid burns and allergic reactions.

The use of garlic in cooking

It has a place of honor in all cuisines of the world. People use both cloves and arrows for making food. You can add it in the fresh form to salads, stews, meat, infuse the oil for flavoring. People pickle and salt the arrows. People love to prepare unusual dishes from garlic in the USA, such as jam and ice cream.

Heat treatment removes the pungency and reduces the smell of garlic, and reduces the activity of many beneficial substances. After eating a fresh one, you should keep in mind that its smell persists for some time, which you cannot eliminate by chewing gum or brushing teeth since volatile compounds are released with sweat, saliva, and sebum.

You should use garlic with whole grains, which contain a lot of zinc and iron, as this vegetable promotes better absorption of these elements.

You can bake it then mash and spread on crackers, toast, bread. Mix with butter, add to casseroles and sauces.

Remove several outer layers from the heads, leaving the last one. Trim the top off by opening the wedges. Drizzle with olive oil and wrap each head in foil. Place on a baking sheet and bake at 180 degrees for 40 minutes. The exact time depends on the size.

A healthy, low-calorie substitute for mayonnaise. Great dressing for salads and a sauce for meat, fish, vegetables, and casseroles. You may replace greens with another favorite.

Wash greens and chop finely. Pass the peeled cloves of garlic through a press. Mix everything with sour cream, add salt and pepper, mix.

When choosing, it is important to pay attention to the absence of rot and mold. The head should be in a dry husk without voids or damage. Sprouted arrows gradually reduce the vegetables’ health, so it is better to buy ahead without green arrows.

In the refrigerator, you should store it no longer than a month – it starts to deteriorate further from excessive humidity. For the longer, you should use storage, dry, dark, cool places, such as subfloors.

It would help if you stored peeled cloves in the refrigerator for several days. While it is important to keep them in a closed container, otherwise the smell of garlic will soak the camera for a long time.

Check out the useful video below on how to grow the garlic: