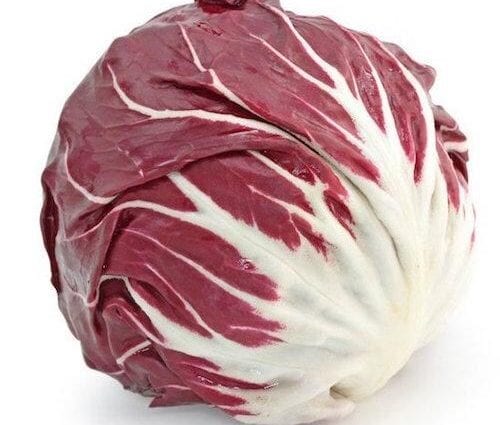 It is a salad that belongs to the chicory family. In his “Natural History” Pliny the Elder wrote about this plant as a remedy capable of purifying the blood and helping people suffering from insomnia. Also Marco Polo wrote about radicchio. He claimed that it was a favorite product of the inhabitants of the Veneta region (present-day Venice). And today, radicchio is one of the most popular salads among Italians.

The technique of growing radicchio with bright purple leaves was invented by an agronomist from Belgium Francesco van den Borre. He came up with the idea of ​​getting young plants out of the ground and sending them to the basement, where, due to the lack of sun, the leaves turn pale, and with the onset of cold weather (radicchio loves low temperatures) they acquire a beautiful purple color. At the same time, a slight bitterness appears in the taste of the leaves.

Today, the leader in the cultivation of radicchio is the Italian province of Treviso. In this region, people have been holding annual fairs and folklore festivals for several centuries in the name of this vegetable.

Several types of the popular radicchio salad are in the list below:

How to choose radicchio

In order to choose tasty radicchio, you need to look for a dense plant head with bright flowers, crisp and shiny leaves. If you notice signs of darkening on the salad, this may indicate that the radicchio has been stored for too long. It is better to refuse such a product.

Keep radicchio in the refrigerator only. At the same time, choose the coldest place, for example, a special compartment for vegetables and fruits. You should not wash it before putting it in the refrigerator. In this form, the shelf life of the plant should not exceed 2-3 days. If you need to store it a little more, up to a week, you can put the radicchio in a plastic bag. In this case, you should remove the upper leaves with damages and should not eat them.

Radicchio’s tangy flavor makes it an excellent addition to any assortment of vegetables, especially one that contains neutral-tasting vegetable varieties.

In Italy, in whose cuisine there is a great variety of vegetable dishes, they love to stew radicchio in red wine or in olive oil. People tend to braise radicchio and serve as a side dish for meat dishes. It goes well with garlic, thyme, and onion, you can try other spices too. In any case, you will have an original Mediterranean dish with a spicy taste.

Fresh radicchio can be an excellent ingredient in salads with cheese, seasoned with olive oil, which is pre-mixed with balsamic vinegar.

One of the most delicious and traditional combinations is radicchio served with risotto.

A salad of radicchio, tuna in its own juice, and arugula is one of the signature dishes of Venice restaurants. In general, arugula and radicchio are a great mix when combining together. Both of these products have a spicy, albeit slightly different shade of taste, which is why they perfectly complement each other both in hot dishes and in salads. It is also an interesting combination of radicchio with honey and apples.

Culinary experts advise placing radicchio leaves in a container with ice and water for a few minutes before use. This will make the leaves crisper and brighter. Also, soaking will reduce bitterness. You can also dip the leaves in boiling water to reduce the bitterness.

The bitter aftertaste of the salad, characteristic of red varieties, creates a unique combination with soft cheeses such as Taleggio or Gorgonzola. But the young plant variety is lighter in taste and is used in the preparation of fresh salads much more often.

Radicchio is popular to use in various diets for weight loss since this product contains practically no fat, cholesterol, sodium and is considered a low-calorie product. There are only 23 calories in 100 grams of fresh radicchio leaves.

Composition and presence of nutrients

The radicchio leafy vegetable is juicy, like red beets or ripe pomegranates. This is due to the very useful substance anthocyanin. This plant also contains unique compounds zeaxanthin, inhibin, vitamin C, folates, minerals, and antioxidants.

Useful and medicinal properties of radicchio

Belgian agronomist Francesco van den Borre invented the method of growing modern radicchio with bright purple leaves. He came up with the idea of ​​extracting young plants from the ground and placing them in a basement, where, due to the lack of sun, the leaves turn pale, and as the cold weather sets in (radicchio loves low temperatures), the leaves turn purple. At the same time, a slight bitterness appears in the taste of the leaves.

The Italian province of Treviso is a leader in the cultivation of radicchio lettuce.

Radicchio has been the favorite greenery of the Venetians for several centuries. Italy hosts annual fairs and even folklore festivals dedicated to Radicchio. And, of course, they take place in the famous province of Treviso.

If the tart taste of radicchio – red lettuce – seems too strong, soak the already cut leaves in boiling water for 5 minutes to soften the taste. Then everything is according to the recipe. Instead of gorgonzola, you can use Roquefort or other blue cheese; hard cheese is better to take like Parmesan.

Check out one more great recipe in the video below:

The beautiful body of a sixty-year-old vegetarian Christie Brinkley: about diet and yoga