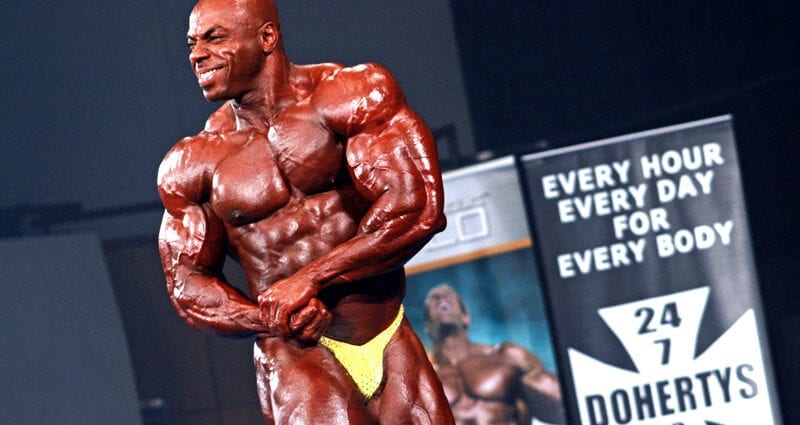 One of the most prominent personalities in the world of bodybuilding is Tony Freeman., also known as X-man. Do not think, such a nickname stuck with him not because of some similarity with the heroes of the American comic book “X-Men”, but for his physique – the athlete has very wide shoulders and a narrow waist, which resembles the letter X. A lot has happened in the life of this athlete interesting events …

Tony Freeman was born on August 30, 1966 in South Bend, Indiana. Looking at the powerful athlete today, it is hard to even believe that once upon a time this man tried with all his might to protect himself from bodybuilding – he simply did not like him. But that was for the time being, until in 1986 one incident happened to him – Cupid’s arrow hit his heart. And all his thoughts were only about one single girl. Tony was seriously intent on connecting his future life with this with a man who, unfortunately, lived in another city. But the distance of love is not a hindrance. And, perhaps, this story would have ended with a happy ending, if not for one “but” – Freeman was very jealous of his beloved for everyone (meaning, of course, for males). But most of all, jealous feelings extended to one of his girlfriend’s acquaintances, who was actively involved in bodybuilding. Fuel was added to the fire when she showed Freeman his photo – this infuriated the guy so much that he, by all means, decided to prove that he, too, could be as pumped up and even better. All his dislike for bodybuilding immediately faded into the background – now he had a different goal.

Freeman began to train hard. He was making progress – in a year and a half he managed to gain weight from 73 kg to 90 kg. And it would seem that everything – now this girl will be his! But it was not there – all Tony’s love now went to bodybuilding, and feelings for that girl faded away. Now Freeman devoted all his time to training.

Soon in 1991, watching the success of Kevin Levron at one of the US championships, Freeman also decided to try his hand at amateur status. Thanks to his acquaintance with a certain Harold Hog, he prepared himself well for the competition.

Freeman began competing in various AAU junior tournaments. But, unfortunately, the athlete was unable to achieve any super-outstanding results. And, perhaps, his best performance during all this time was his participation in the “Mister America-90” tournament. There he took 4th place.

Later, in 1993, he took the top prize of the US NPC Junior Championships. Now Tony is fully ripe for the national championship, but he never managed to enter the top three.

In 1996, the athlete comes out of this crazy race. The reason for this was an injury to the pectoral muscle, which Freeman received 9 weeks before the US Championship. Gradually, all the love for competition faded in him. He’s taking a big “vacation”.

Strange, but for 4 years, Tony did not receive the necessary course of treatment – he had a distrust of doctors. And this is no coincidence – in one office he was told that after the operation there would be scars, in another they said that serious complications could arise.

Everything changed when an acquaintance Tony introduced him to one very good surgeon who was able to convince the athlete to go under his knife. In 2000, the operation was successfully carried out.

This event became fateful in the life of an athlete, because a year later Freeman returns to the arena of powerful athletes. And in the Coastal USA Championships, he comes in second. After that, Tony for some reason stopped taking any competition seriously. It did not pass without a trace and in “Nationals 2001” he took only 8th place.

Apparently, this state of affairs did not suit the athlete in any way, and a year later, having taken revenge, he took the main prize in the super-heavyweight division.

In 2003, Freeman was awarded the honorary status of a professional by the IFBB.