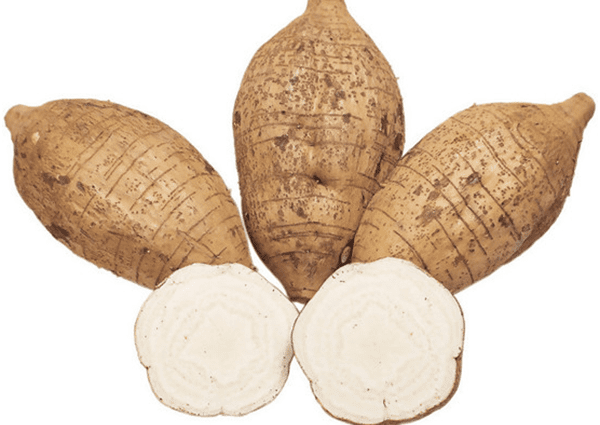 Arrowroot (from the English arrow – arrow and root – root). The collective trade name for starch flour obtained from rhizomes, tubers and fruits of a number of tropical plants. The real, or West Indian, arrowroot is obtained from the rhizomes of a perennial herb of the arrowroot family (Marantaceae) – the arrowroot (Maranta arundinacea L.), growing in Brazil and widely cultivated in Africa, India and other tropical countries. The starch content in them is 25-27%, the size of starch grains is 30-40 microns.

The medical name for real arrowroot is arrowroot starch (Amylum Marantae). Indian arrowroot, or turmeric starch, is obtained from the tubers of the wild and cultivated Indian plant, Curcuma leucorhiza Roxb., From the ginger family – Zingiberaceae. Unlike the more common spice C. longa L. with yellow tubers, C. leucorhiza tubers are colorless inside.

obtained from edible canna tubers (Canna edulis Ker-Gawl.) From the Cannaceae family, is characterized by the largest starch grains – up to 135 microns, visible to the naked eye. Homeland K. s. – tropical America (the ancient culture of the Indians of Peru), but it is cultivated far beyond its range – in tropical Asia, Northern Australia, the Pacific Islands, Hawaii.

Sometimes the starch obtained from the most common tropical starch – cassava (tapioca, cassava) – Manihot esculenta Crantz from the Euphorbiaceae family is called the Brazilian arrowroot. The highly thickened long lateral roots of this plant, cultivated in the tropics of all regions, contains up to 40% starch (Amylum Manihot). The starch mass obtained from the fruit pulp of bananas (Musa sp., Banana family – Musaceae) is sometimes called the Guiana arrowroot.

(grain size 25-55 μm) is obtained from Ipomoea batatas (L.) Lam., And Portland one is obtained from Arum maculatum L. Arrowroot starch has broadly the same uses, regardless of source. It is used as a medicinal food product for metabolic diseases and as a dietary remedy for convalescents, with thinness, anemia of the intestines, in the form of mucous decoctions as an enveloping and emollient.

Composition and presence of nutrients

There are absolutely no fats in the composition of this product, therefore it is almost completely absorbed by the human body. It is classified as a dietary product. Also, arrowroot is consumed by people who adhere to a raw food diet, since it does not require heat treatment.

Arrowroot has a tonic effect, normalizes metabolism. Due to the high level of fiber and starch substances, it is used in the treatment of anorexia and intestinal anemia. A hot drink with the addition of arrowroot warms up perfectly and prevents colds. The presence of biologically active substances promotes blood thinning and prevents the formation of blood clots in the vessels.

Due to the lack of any taste, this product is widely used in American, Mexican and Latin American cuisines for making a variety of sauces, jelly desserts and baked goods. In the process of preparing dishes with arrowroot, a relatively low temperature is required for complete thickening, so it goes well in sauces based on raw eggs and in custards. Also, dishes do not change their color, as, for example, when using flour or other types of starch. Thicken mixtures at low temperatures (ideal for egg sauces and liquid custards that curdle when heated too much). Its ability to make foods thicker is twice that of wheat flour, and it does not cloud when thickened, so it allows you to get beautiful fruit sauces and gravies. Finally, it doesn’t have the chalky taste that cornstarch has.

Depending on the required thickness of the final arrowroot dish, add 1 tsp, 1.5 tsp, 1 tbsp. l. for one tablespoon of cold water. After that, mix thoroughly and pour the mixture into 200 ml of hot liquid. The result will be a liquid, medium or thick consistency, respectively. It should also be borne in mind that when the arrowroot is heated for more than 10 minutes, it loses all its properties and the liquids take their original state. Dissolve 1.5 tsp. arrowroot in 1 tbsp. l. cold liquid. Stir the cold mixture into a cup of hot liquid at the end of cooking. Stir until thick. This makes about a cup of sauce, soup, or gravy of medium thickness. For a thinner sauce, use 1 tsp. arrowroot. If you need a thicker consistency, add – 1 tbsp. l. arrowroot

Scientists have found out what are the benefits of dark chocolate

Beans and other legumes: cooking tips