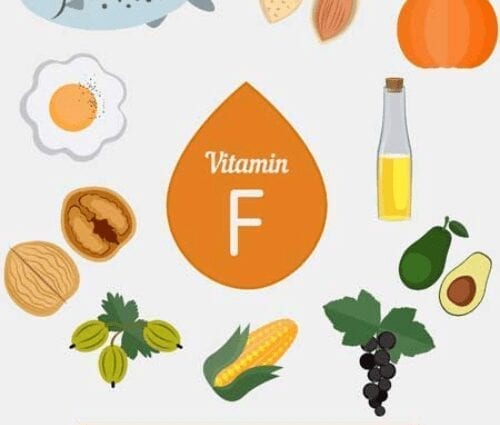 The term vitamin F refers to essential fatty acids, namely linoleic and alpha linoleic… They enter the body from food in the form of (mono- and poly-) fatty acids and play an important role in lowering cholesterol levels, regulating blood pressure, and reducing the risk of strokes and heart attacks. In addition, vitamin F is essential for the development of the brain in the fetus in the womb, the newborn and the baby, and for the maintenance of brain function in adults.

The European health authorities have developed guidelines for the intake of the most essential fatty acids for adults:

In the United States, the intake of fatty acids has been set at:

Pregnant women, nursing mothers, young children and women who may become pregnant are advised not to eat certain types of fish – swordfish, shark and king mackerel, as there is a risk of high levels of hazardous substances in their meat (such as mercury). In such cases, nutritional supplements are advised.

It is important to maintain a proper balance of omega-3 and omega-6 in the diet, as the two interact directly. For example, acids of the omega-3 group (alpha-linoleic acid) help relieve inflammation in the body, and a large amount of omega-6 (linoleic acid) can, on the contrary, provoke inflammation. An imbalance of these two acids can lead to disease, and the right combination maintains or even improves health. A healthy diet should contain about 2-4 times more omega-6 fatty acids than omega-3. But experience shows that in developed countries, the typical diet contains 14-15 times more omega-6 acids, and many researchers believe that this imbalance is a significant factor in the increase in the number of inflammatory diseases. In contrast, the Mediterranean Diet contains a healthier balance of the two and is considered to be more beneficial to heart health.

At risk of developing a deficiency or imbalance of essential fatty acids are:

We recommend that you familiarize yourself with the assortment of natural essential fatty acids (Omega 3-6-9 combinations) at the largest in the world. There are more than 30,000 environmentally friendly products, attractive prices and regular promotions, constant 5% discount with promo code CGD4899, free worldwide shipping available.

Useful properties of vitamin F and its effect on the body

Eating enough polyunsaturated fatty acids in the form of omega-3 and omega-6 is very important as they play a critical role in:

Interactions with other elements and useful combinations of products

Nutritionists advise eating foods rich in cofactors that promote the absorption of essential fatty acids. They aid in the further processing of acids after they enter the body. The key cofactors are:

Polyunsaturated fatty acids are subject to oxidation. Therefore, they are advised to use them in large quantities in order to preserve fragile bonds in their chemical structure. Bright fruits and vegetables, for example, are excellent sources of antioxidants. Antioxidants that prevent fatty acid oxidation are alpha lipoic acid (found in beef, dark green leafy vegetables) vitamin E (from whole wheat grains, seeds and) and coenzyme Q10 (usually produced in the liver, but in some cases must be taken medically). It is recommended to avoid eating oxidized fatty acids – this happens when the seed oil is used for frying, exposed to light or heat. Oxidized poly- and monounsaturated acids are also found in ready-to-eat foods, even organic ones, such as pies, vegetarian convenience foods, falafel, etc.

In order to improve the metabolism of essential fatty acids in the body, you should:

How to correct and improve nutrition?

Fatty acids break down under the influence of three main factors – light, air and heat. This should be considered when preparing and storing foods rich in omega-3 and omega-6. Frying and deep frying expose fats to three destructive factors at once. Fats that have been exposed to high temperatures can cause atherosclerosis, prevent air from entering the cells of the body, lower the function of the immune system and potentially increase the risk of developing.

Use in official medicine

In official medicine, essential fatty acids are used for the prevention and complex treatment of various diseases. In addition, the full effects of these substances are still being investigated.

There is some evidence that omega-3 fatty acids can heal and prevent by interfering with the formation of blood clots. They lower blood pressure and heart rate, reduce inflammation, and improve vascular and platelet function.

Patients who are ill often have high blood fat levels. Research shows that omega-3 fatty acids (namely the long molecular chain acids eicosapentanoic and docosahexaenoic acids) derived from fish oil can reduce this fat. It should be noted that excessive consumption of fatty acids has the potential to increase blood sugar levels.

Essential fatty acids are essential for mental health. Omega-3 is an important component of the membrane of nerve cells, through which they transmit information. It was noted that patients with depression had extremely low omega-3 levels and a very high omega-3 to omega-6 ratio. Eating oily fish 2-3 times a week for 5 years significantly improved the condition of the patients. Improvement after taking omega-3 in combination with drugs was also noted in patients with bipolar disorder.

When assessing the level of fatty acids in patients, it was noted that in each of the interviewed patients (20 people), who also took antipsychotics, the ratio of omega-3 to omega-6 was reduced. It remained so even after the death of the patient. Taking 10 grams of fish oil per day, in turn, had a positive effect on the patients’ symptoms.

Low levels of certain fatty acids can be seen in children with attention deficit hyperactivity disorder. A balanced intake of omega-3 and omega-6 has generally been beneficial for both children with ADHD and adults.

Fatty acids are one of the most important components in the treatment of patients.

EFAs are vital structural elements of cell membranes and therefore contribute to the formation of new tissues. Primary fatty acids cannot be synthesized by humans, therefore human health depends on the intake of fatty acids from food.

Omega-3 and omega-6 fatty acids are also very important for the development of the fetus. In order to get them in sufficient quantities, it is advised to include in the diet of a pregnant woman such foods as vegetable oils, fish 2 times a week, as well as vitamins, which include essential fatty acids.

Due to their beneficial effect, especially on the skin, essential fatty acids (also known as vitamin F) are of great importance in cosmetology, becoming more and more widely used components of many cosmetics intended for daily face and body care. Deficiency of these substances can lead to excessive dryness of the skin. If vegetable oils are used as a cosmetic base, from which essential fatty acids are obtained, such products prevent the loss of moisture from the skin by creating a protective layer on the epidermis. In addition, they soften the stratum corneum and reduce skin inflammation, thereby relieving pain. In addition to this, they play a very important role in the proper functioning of the human body. Medicine recognizes the beneficial effect of vegetable oils on the biological synthesis of components of cell membranes, are involved in the transport and oxidation of cholesterol. A lack of essential fatty acids can lead to fragility of blood vessels, a deterioration of the immune system, the process of blood clotting and lead to.

Linoleic acid (found in sunflower, soy, saffron, corn, sesame, and also from) improves the lipid barrier of dry skin, protects against moisture loss and normalizes skin metabolism. It has been noted that people with often have low levels of linoic acid, resulting in clogged pores, comedones and eczema. The use of linoic acid for oily and problem skin leads to, cleansing of pores and a decrease in the number of rashes. In addition, this acid is part of the cell membranes.

Other essential fatty acids for the skin are gamma-linoleic acid (found in borage, binder and hemp oil) and alpha-linoleic acid (found in flaxseed, soybean, rapeseed oil, walnut oil, wheat germ and phytoplankton). They are physiological components of cell membranes and mitochondria in the human body. And eicosapentaenoic and docosahexaenoic acid (both are in the omega-3 group and are found in fish oil) prevent the development of tumors, relieve inflammation after sun exposure, reduce irritation and stimulate recovery processes.

All of the above benefits can be achieved by taking vitamins, applying medications to the skin, or by intravenous administration. Each specific case requires consultation with a medical professional.

In folk medicine, essential fatty acids are considered very important for the respiratory organs. They help to maintain the elasticity of cell membranes, contribute to normal lung activity. Symptoms of vitamin F deficiency and imbalance are brittle hair and nails, dandruff, loose stools. Fatty acids are used in the form of vegetable and animal oils, seeds and nuts. Vitamin F is replenished primarily from food. For example, it is advised to eat 50-60 grams in order to provide a daily intake of fatty acids. In addition, vitamin F is considered a beneficial remedy for inflammation and burns. For this, primarily oils are used.

Signs of a vitamin F deficiency

Some possible signs of a deficiency and / or imbalance between essential fatty acids are itching, dryness of the body and scalp, brittle nails, as well as atypical symptoms such as asthma, excessive thirst and urination, aggression or cruelty, bad mood, anxiety, and a tendency to inflammation and hormonal imbalances (including cortisol, thyroid hormones, and insulin). The balance of fatty acids in the body is important for every physiological process. To determine the level of fatty acids, among other things, an analysis of the erythrocyte membrane or functional testing of vitamins and minerals of group B is performed.

An imbalance in fat carries the following risks:

An overabundance of omega-3s is dangerous:

An overabundance of omega-6s is dangerous:

Interaction with other substances

It is believed that the need for vitamin E increases with an increase in the intake of essential fatty acids.

In the late 1920s, scientists became interested in the nutritional value of fats. Prior to that, dietary fats were known to provide energy and contain vitamins A and D. Several scientific articles have been published describing previously unknown deficiencies resulting from the elimination of all types of fat from the diet, and the existence of a new vitamin, F. After further experimentation, scientists discovered that the deficiency could be cured by taking pure “linoelic acid”, and in 1930 the term “essential fatty acids” was first used.

We have collected the most important points about vitamin F in this illustration and we would be grateful if you share the picture on a social network or blog, with a link to this page:

Read also about other vitamins: