Honey – description of a food product. Health benefits and harms

The benefits of honey for the human body are great. But it is harmful mainly for allergies and diabetes. In other cases, bee honey is a good preventive and tonic agent – it gives the body a lot of energy, strengthens the immune system, and is recommended for the treatment of many diseases.

Honey is rightfully one of the most popular sugar substitutes, because it is not only effective in this, but also useful.

The earliest mention of bee honey was found in the Aran cave near the Spanish city of Valencia. The drawings in the cave depict how people climb the rock and take out honeycombs, and bees fly around them. The age of the picture is determined in the region of 15 thousand years.

According to written sources, the usefulness of bee honey was known 5 thousand years ago, during the time of ancient Egypt. According to descriptions in the Egyptian papyri, beekeeping in Egypt was highly developed and was a respected business.

A unique feature of Egyptian beekeeping was that in the upper reaches of the Nile, honey collection began earlier than in its lower reaches. Therefore, beekeepers put the hives with bees on rafts and lowered them downstream. And bees collected nectar from plants along the banks of the river.

In its modern form, beekeeping and the very structure of the hives arose in the 7-8 century BC in Greece. Partitions have been added to the hive and the efficiency of honey collection has been increased. The first scientific works on bee honey also appeared in Greece about 2.5 thousand years ago.

The Greek scientist Xenophon in his work “Anabasis” described in detail the life of a bee swarm and the healing properties of honey. Later, his works were continued by Aristotle, who was also fond of beekeeping.

In ancient Rome, beekeeping was also not spared. Even in Roman law, it was written that bees without a hive are ownerless and can be cultivated by any free Roman who wants to. Another work on beekeeping, this time by the Roman scientist Varro, dates back to the 1st century BC. The work describes in detail how to make a beehive and the beneficial properties of honey.

The first mention of bee honey in Russia dates back to 945, when Princess Olga ordered mead to be cooked for the commemoration of Prince Igor. Apparently, beekeeping at that time was already well developed and had ancient roots.

Honey is a rich source of vitamins and minerals. It contains all vitamins of group B, K, E, C, provitamin A. Since vitamins are in combination with natural mineral salts and biogenic amines, the benefits of them are much higher than synthetic substitutes.

Of the macro- and microelements it contains magnesium, potassium, calcium, sodium, phosphorus, chlorine, sulfur, zinc, iodine, copper, iron. Each of these elements affects the course of physiological processes in the body, acting as catalysts for biochemical reactions.

The carbohydrate composition of honey is mainly represented by fructose and glucose. They are easily absorbed and, unlike sugar, do not harm the tooth enamel.

It is surprising, but in its chemical composition honey is very similar to human blood plasma and is absorbed by our body 100%. Not an ounce of eaten honey is wasted just like that.

Most bees deposit hydrogen peroxide in honey when they synthesize pollen. Therefore, honey, especially the one with sourness, is an ideal antibacterial agent.

There is plenty of evidence to support the use of honey as a cure for infection. A number of studies of medical universities around the world have proven the effectiveness of honey in the fight against infections of the MRSA (sepsis, pneumonia, and others) and URI (upper respiratory tract) types. In addition, Manuka honey, a honey from the flowers of a tree-like shrub that produces the antibacterial substance methylglyoxal, is able to kill bacteria that are even resistant to antibiotics.

In Scientific World Journal, researchers provided evidence that natural honey was as effective as an antiseptic solution in relieving wound infections.

The World Health Organization (WHO) and the American Academy of Pediatrics recommend honey as a natural cough suppressant.

Several studies in more than 100 children showed that honey was better at nighttime coughs than popular cough suppressants. Plus, it improves sleep.

But it is worth considering that honey is dangerous and it is not recommended to give honey to children under one year old, because, firstly, it is quite allergenic, and secondly, the digestive system of babies often cannot cope with pollution that in small quantities gets into honey.

One study reported 43.3% success with honey in wound healing. In another study, local honey healed a whopping 97% of patients’ diabetic ulcers. A review published in the Cochrane Library showed that honey can help heal burns.

This drug is cheaper than antibiotics, which can also have side effects. Manuka honey is especially effective for treating burns.

What’s more, it can help treat other skin conditions, including psoriasis and herpes lesions.

Reduces the duration of diarrhea

According to research, honey reduces the severity and duration of diarrhea. It increases potassium and water intake, which is especially beneficial for diarrhea.

Research in Lagos, Nigeria shows that honey can also block the pathogens that commonly cause diarrhea.

Research in laboratories has shown that Tualang honey, honey from the pollen of the Kempes or Tutuang bee swarm tree, destroys breast, cervical and skin cancer cells. But this theory is still quite far from being tested in humans.

Studies in both rats and humans have shown moderate reductions in blood pressure from honey consumption. This is due to the content of antioxidant compounds associated with lowering blood pressure.

High LDL cholesterol levels are a strong risk factor for cardiovascular disease. This type of cholesterol plays a major role in atherosclerosis, the accumulation of fat in the arteries that can lead to heart attacks and strokes.

Honey for pregnant women – is it useful?

If there are no other contraindications, it is not only possible to use honey during pregnancy, but also necessary! Honey has a beneficial effect on the formation and growth of the fetus, enhances uterine blood circulation, relieves excessive tension from the smooth muscle of the uterus, blood vessels and bronchi.

During pregnancy, honey is indispensable for the treatment of colds, and many medical drugs are undesirable or completely contraindicated. With severe toxicosis, honey helps fight nausea and improves appetite. During childbirth, honey can also be useful – it is administered to the woman in labor to prevent exhaustion and facilitate the birth of the baby.

It is not recommended to exceed the daily intake of honey and consume it on an empty stomach!

Children often suffer from colds, disappear at home for weeks and miss school. Treatment of children’s colds with bee honey will not only quickly put the child on his feet, but also strengthen his immunity – he will get sick much less often.

In addition to relieving coughs, honey has antibacterial properties and repairs damaged cells in the respiratory tract. Chronic rhinitis is treated with honey, radish juice with honey is recommended for the treatment of bronchitis, pneumonia, bronchial asthma and tracheitis.

If the child is very tired from studying, regular use of honey will also help – simple sugars in its composition are good food for the brain. Honey serves as an antidepressant: it relieves irritability, anxiety, and normalizes sleep. The presence of antioxidants in honey not only strengthens the body and improves brain function, but also reduces the risk of cancer.

At what age to start

Early consumption of honey is highly undesirable. Honey may contain bacteria that are harmless to adults but harmful to the health of the newborn. Also, honey can act as a strong allergen, and eating it before the age of three with a high probability can fix an allergic reaction to it in the body, which will last a lifetime.

The easiest way to detect an allergic reaction is to apply a drop of honey to the baby’s skin or let it eat. If no symptoms appear, then honey can be given, but not exceeding the daily norm – overeating honey in childhood can lead to allergies.

The daily norm of honey for an adult, regardless of gender, is no more than 150 grams. It is best to consume this amount in small portions throughout the day. For children, the daily allowance is about 2 times less and is 50-75 grams. You can eat honey on an empty stomach, but after that it is recommended to eat normally for half an hour.

The main “male” health problems are: heart attack, nervous disorders, prostate diseases, decreased potency and baldness. All these diseases of men can be treated with honey to varying degrees:

In addition to the widespread use of honey in cosmetics, it also has many beneficial properties, primarily interesting for women:

Eating any food that contains carbohydrates raises blood sugar levels, so these foods should only be eaten on the advice of a doctor. And honey is no exception.

It is easier for insulin-dependent diabetics to eat honey – it is enough to inject insulin on time, which is necessary for the absorption of sugars. With type 2 diabetes, everything is more complicated. This type of diabetes is characterized by insulin resistance, cell insensitivity to insulin (complete or partial). In this case, sugars are not absorbed by the body in the proper volume and accumulate in the blood. And pills slowly lower blood sugar levels.

Although honey is much higher in calories than sugar, in the right diet, it does not lead to the deposition of excess fat. Honey cleanses the body and stimulates digestion. Just one spoonful of honey has a beneficial effect on the liver, allows it to quickly absorb food and remove fats from the body.

Speaking about the dangers of honey for the human body, there are several cases in which this product should be used with great care or abandoned altogether.

Also, honey should not be added to baked goods or hot tea.

The very first use of bee honey for cosmetic purposes was attested in Egypt. The ancient Egyptian queen Cleopatra made herself masks of honey all over her body, and they wrote that she was famous for her beauty.

Some components of honey are able to be absorbed through the skin and absorbed by cells directly, which makes masks with honey very useful. With their frequent use, the skin becomes not only outwardly healthier, but also internally also strengthens. With a honey mask, you can:

for problem skin with enlarged pores, tighten them;
accelerate cell division and thus rejuvenate the skin;
keep more moisture in the skin if it is too dry;
cleanse the skin of acne and blackheads and activate its breathing.
The significant effect of the regular use of masks containing honey is noticeable on skin that is flabby and has already lost its vitality.

In addition to masks with honey, the modern cosmetics market also offers: scrubs, body wraps, creams and even honey shampoos! And even pure bee honey can be used for massage.

Types of Honey. Features and description of honey types 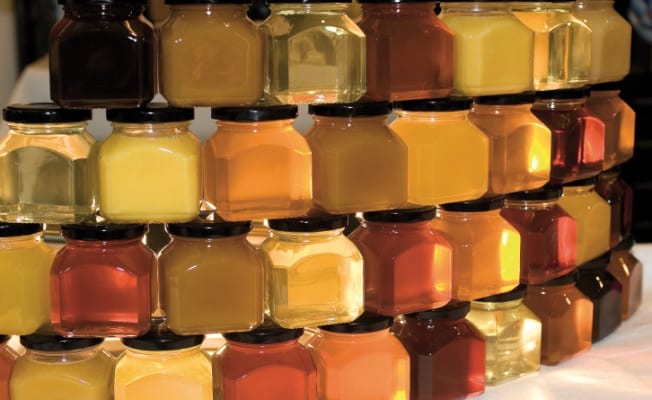