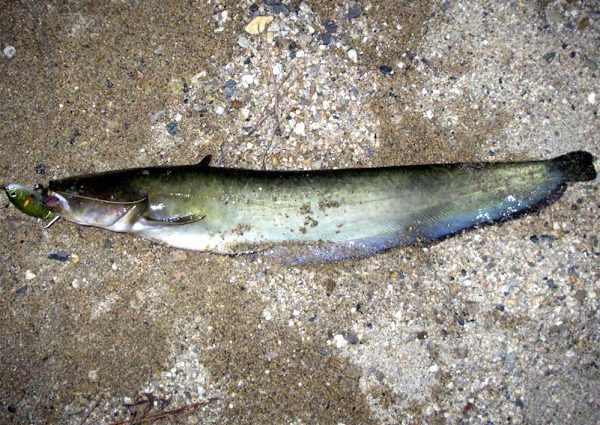 Amur catfish belongs to the order of catfish and to the genus of Far Eastern catfish. The most important difference from the more familiar fish for the inhabitants of European Russia – the common catfish, is the size. The maximum size of the Amur catfish is considered to be a weight of about 6-8 kg, with a length of up to 1 m. But usually Amur catfish come across up to 60 cm and weighing up to 2 kg. The color is grayish-green, the belly is whitish, the back is black. Scales are absent. Of the features, the presence of two pairs of antennae in adult fish can be distinguished. In juveniles, the third pair is present, but disappears in fish more than 10 cm long. It is worth noting here that another species of catfish is found in the Amur basin – Soldatov’s catfish. This Far Eastern species is distinguished by habitat conditions, larger sizes (weighing up to 40 kg and a length of about 4 m), as well as minor external differences. As for the described species (Amur catfish), in relation to other “relatives”, including Soldatov’s catfish, the head and lower jaw of the fish are less massive. There are still some color differences, especially at a young age, but otherwise, the fish are very similar. The habits and way of life of the Amur catfish resemble the reed form of the common (European) catfish. Amur catfish mainly adhere to the subordinate sections of rivers and tributaries. They enter the main channel during periods of a strong drop in the water level or when parts of reservoirs of habitual existence freeze in winter. The Soldatov catfish, on the contrary, adheres to the channel sections of the Amur, Ussuri and other large reservoirs. Like most species of catfish, the Amur catfish leads a twilight lifestyle, being an ambush predator. Juveniles feed on various invertebrates. During periods of mass visits of migratory small fish or seasonal migration of sedentary species, gregarious behavior of catfish was noted. They gather in groups and attack flocks of smelt and stuff. Although, in general, Amur catfish are considered lone hunters. The size of the prey can be up to 20% of the size of the fish itself. In the Amur, there are more than 13 species of fish that the Amur catfish can feed on. An important feature of the species is slow growth (slow growth). The fish reaches a size of 60 cm at the age of 10 years or more. Despite the prevalence of the species in the Amur basin, it is worth noting that the size and abundance of the Amur catfish population are importantly influenced by natural factors, such as the annual water level regime. In the case of long periods of high water, fish have a reduced food supply in the zone of permanent existence, which has a negative impact. Amur catfish is considered a commercial fish and is caught in large numbers. Against the background of other negative factors (pollution, changing living conditions), the population is declining, and therefore the species requires restrictions in commercial catch and other conservation measures.

As already mentioned, the behavior of the Amur catfish is similar to its European “relatives”. Spinning can be considered the most interesting amateur way of catching this fish. But taking into account the feeding behavior of catfish, other types of fishing using natural baits can also be used for fishing. Many fishermen use various bottom and float gear. Fishing methods and equipment directly depend on the size of the reservoirs and fishing conditions. First of all, this concerns the “long casting” rigs and the weight of spinning nozzles. It is important to note that the size of the fish is relatively small, especially powerful tackle is not required, and therefore, adjusted for other Far Eastern species, you can use fishing rods suitable for fishing in this region. In addition, taking into account the peculiarities of the water bodies of the Far East and their species diversity, specialized fishing for Amur catfish is usually carried out using natural baits.

Catching Amur catfish on spinning, as in the case of the European catfish, is associated with a bottom lifestyle. For fishing, various fishing techniques are used for jigging lures and deepening wobblers. According to the conditions and desires of the fisherman, in the case of specialized fishing, you can use the appropriate rods for these lures. Moreover, at present, manufacturers offer a large number of such products. But still, the choice of the type of rod, reel, cords and other things, first of all, depends on the experience of the fisherman and the fishing conditions. As already mentioned, the species does not differ in huge sizes, but it is worth considering the possibility of catching large fish of other species. Local anglers believe that the largest individuals react to natural baits, and therefore, in case of a strong desire to catch “trophy fish”, it is advisable to use various equipment for fishing for “dead fish”. Before fishing, you should definitely clarify the conditions for fishing on the river, because the Amur basin and tributaries can vary greatly depending on the region, and already choose gear relative to these indicators.

The choice of bait is connected with the choice of gear and the method of fishing. In the case of fishing, various wobblers, spinners and jig nozzles are suitable for spinning gear. It is worth noting that in most cases the fish prefers large baits. For fishing on bottom and float rigs, a variety of nozzles from poultry meat, fish, shellfish and more are used. Typical baits include frogs, crawling earthworms and others. Like the European catfish, the Amur catfish responds well to strong-smelling baits and baits, although it avoids rotten meat.

Amur catfish lives in the basin of the Japan, Yellow and South China seas. Distributed in rivers, from the Amur to Vietnam, the Japanese islands, and also in Mongolia. On Russian territory, it can be caught in almost the entire Amur basin: in rivers from Transbaikalia to the Amur Estuary. Including, in the northeast about. Sakhalin. In addition, catfish live in lakes with flow into the Amur basin, such as Lake Khanka.

Fish become sexually mature at the age of 3-4 years. Spawning takes place in the summer, when the water warms up, most often from mid-June. It is worth noting that males are usually smaller than females, while the ratio of individuals on spawning grounds is usually 1:1. Spawning takes place in shallow areas heavily overgrown with aquatic vegetation. Unlike other types of catfish, the Amur catfish does not build nests and does not guard eggs. Sticky caviar is attached to the substrate; females lay it separately over large areas. The development of eggs is quite fast and juveniles of catfish quickly switch to predatory food.

2022-12-07
Previous Post: Robalo fish: ways and places to catch sea fish
Next Post: Catfish fish: ways to catch catfish from the shore and on the bottom

Is killing a plant comparable to killing an animal?

7 tips to save the environment and save some money