Food to quench your thirst 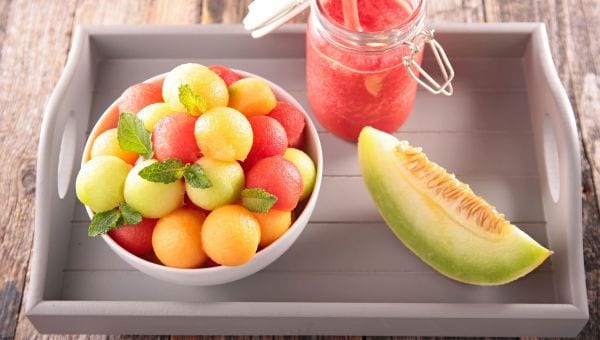 Every person experiences the strongest feeling of thirst at some point. It can appear not only in summer, but also in winter, especially if it is preceded by intense physical activity. As a rule, in order to get rid of it, it is enough to drink a glass of water. It will allow you to replenish the lost fluid in the body, the lack of which causes similar sensations. But what if he is not at hand?

The role of water in the human body

Doctors say that the feeling of thirst cannot be ignored in any case. The human body is almost 60% water. She also takes an active part in many processes taking place in it, and is responsible for the normal operation of all organs.

In addition, it is water that regulates the temperature of the human body, helps to neutralize toxins, ensures the transport of nutrients and oxygen to the cells, and also takes care of the health of tissues and joints. Lack of water causes hypotension, an imbalance of electrolytes, or minerals such as potassium, calcium, sodium and others, cardiac arrhythmias and impaired brain function.

How long liquid does a person need

Experts at the Mayo Clinic (the largest association of multidisciplinary clinics, laboratories and institutes) claim that under normal conditions, “every day, the human body loses up to 2,5 liters of fluid through breathing, sweating, urination and bowel movement. In order for these losses not to affect its functioning, it needs to be replenished “(3,4)… That is why nutritionists are advised to drink up to 2,5 liters of water per day.

According to research from the Institute of Medicine in the United States, 20% of the body’s water comes from food. In order to get the remaining 80%, you need to drink various drinks or consume certain vegetables and fruits with a high water content.

In some cases, a person may need up to 7 liters of water per day, namely:

In addition to the above reasons for moisture loss, scientists have named several more. Some of which, to put it mildly, are surprising:

Watermelon. It contains 92% liquid and 8% natural sugar. It is also a source of electrolytes such as potassium, sodium, magnesium and calcium. Along with this, thanks to its high levels of vitamin C, beta-carotene and lycopene, it protects the body from the harmful effects of ultraviolet rays.

Grapefruit. It has only 30 kcal and is 90% water. In addition, it contains special substances – phytonutrients. They are able to cleanse the body of toxins and reduce the risk of developing cancer cells.

Cucumbers. They contain up to 96% water, as well as electrolytes such as potassium, calcium, magnesium, sodium and quartz. The latter is incredibly beneficial for muscle, cartilage and bone tissue.

Avocado. It contains 81% of the liquid, as well as 2 main carotenoids – lycopene and beta-carotene, which have a positive effect on the general condition of the body.

Cantaloupe, or cantaloupe. At 29 kcal, it contains up to 89% water. In addition, being an excellent source of energy, it speeds up metabolism and normalizes blood sugar levels.

Strawberry. It contains only 23 kcal and contains 92% water. It has excellent antioxidant properties and is also actively involved in the regulation of blood sugar levels.

Broccoli. It is 90% water and has antioxidant and anti-inflammatory properties. In addition, it contains the most important of the electrolytes – magnesium, which normalizes the work of the cardiovascular system.

Citrus. They contain up to 87% water and a huge amount of vitamin C.

Zucchini. It contains 94% water and also helps to improve digestion.

Apple. It contains 84% ​​water and a huge amount of electrolytes, especially iron.

Tomato is 94% water and a huge amount of nutrients and antioxidants.

Celery. It is 95% water and improves the functioning of the cardiovascular system and the gastrointestinal tract, as well as slows down aging and soothes the nervous system.

Soft drinks – tea, water, juices, etc. Research results published in Medicine and Science in Sports and Exercise in 2008 showed that “cyclists who consumed soft drinks before and during exercise exercised 12 minutes longer than those who preferred warm ones.” This is explained by the fact that such drinks lower body temperature. As a result, the body has to put less effort into performing the same exercises.

In addition, vegetable soups and yoghurts will help replenish lost fluid. Moreover, they also have a number of useful properties, in particular, they improve digestion and increase immunity.