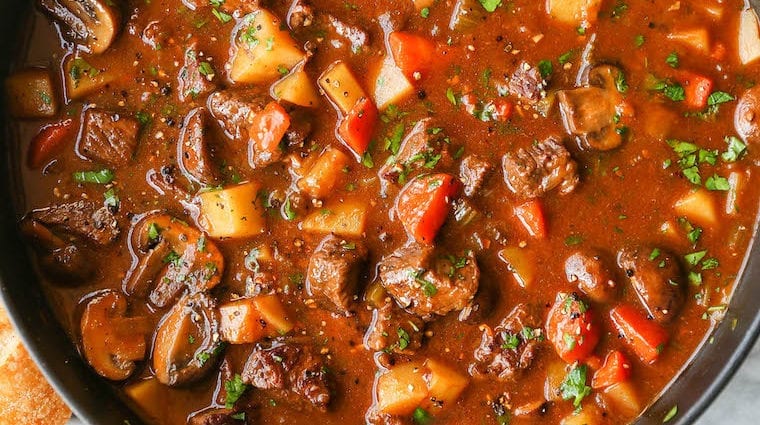 In cooking, stewing is the average cooking procedure between roasting and boiling. Braising is always carried out under a lid in the presence of a small amount of liquid and fat. In addition to the classic extinguishing procedure, there are some more less common varieties of this method:

The braising procedure is applicable for cooking vegetables, fish, poultry and meat, as well as fruits. Having much in common in the technology of cooking various products, stewing has a number of features that are used exclusively in certain cases.

Here are some rules for properly preparing food:

The most famous dish prepared with this method is the vegetable stew. Of course, each housewife prepares this dish in her own way, we will give only the general technology of its preparation.

Vegetables to be stewed are washed, peeled and then chopped. Cut the potatoes into cubes and put them in a frying pan, then add water and stew over medium heat (so that the potatoes do not disintegrate, you can first fry them in oil for 2-3 minutes until golden brown). Pre-chopped onions and carrots are placed in a separate frying pan, lightly fried, covered with a lid and stewed until half cooked.

Then the potatoes are checked. When it is almost ready, finely chopped cabbage is added to it. After about a couple of minutes, add the stewed onions and carrots. Salt and spices are added to taste.

To help the oil retain more nutrients, you can add it at the very end of the stew cooking. The cooking time takes about 40 minutes. You can add a wide variety of vegetables to the stew, experimenting with flavor. Depending on the season, pepper, zucchini, cauliflower, asparagus, tomatoes and, of course, different types of greens are added there – all this will organically fit into the general ensemble of the taste of vegetable stew.

In addition to stews, the most popular stewed vegetable dishes include squash, beetroot and eggplant caviar, stewed potatoes with mushrooms, and the Hungarian national dish lecho.

Pre-prepared and cut into equal pieces meat or poultry is flavored with spices. The meat is beaten. The finished products are placed in a well-heated frying pan in hot oil. Fry until golden brown for 2-3 minutes, then cover the pan with a lid and stew until tender. The roasted crust prevents the juice from flowing out, thanks to which the meat is very tasty, tender and juicy.

Poultry and meat acquire an especially spicy taste after soaking them in a marinade for 8-10 hours (vinegar or wine with spices and a little mayonnaise)! Although this cooking option is often used on the holiday menu. It does not apply to dietary nutrition. Pickled foods are prohibited for people with many gastrointestinal problems.

The fish is cleaned, freed from entrails and scales, washed. If the fish is large – cut into pieces of the same size, for even cooking. Flour is poured into a separate saucer, salt is prepared.

The fish is salted, doused in flour and put in a frying pan in preheated oil. After crusting, the product is turned over, lightly fried on the other side. Then add a little water and stew until tender.

Braising is one of the healthiest cooking methods. This method is used by many people who lead a healthy lifestyle. Stewing allows you to retain a large amount of nutrients that remain in the finished dish, and do not merge with the water, as, for example, during cooking.

From the point of view of the maximum usefulness of food, this method can be considered one of the most gentle, due to the preservation of a large amount of vitamins and microelements in food.

The cooking process takes place at a temperature below the boiling point, which allows not only to preserve vitamins, but also the original shape of the dish.

In a stewed form, animal and vegetable proteins are better absorbed, due to the softening of fibers and tissues. And some foods even provide additional nutritional benefits. For example, when stewing, prunes acquire a sweetness and piquant taste, and healthy enzymes are released in it.

Excessive enthusiasm for food that has undergone heat treatment contributes to the deterioration of the gastrointestinal tract, due to a lack of fresh plant fibers in the diet.

Eating only stewed food, you can acquire dysbiosis, worsen intestinal motility, in general, sabotage the normal functioning of the digestive system.

In addition, during stewing, there is a gradual destruction of vitamins of group B and C. Their quantity decreases, in proportion to the cooking time.