Catching a Stingray: lures and methods of fishing on bottom gear 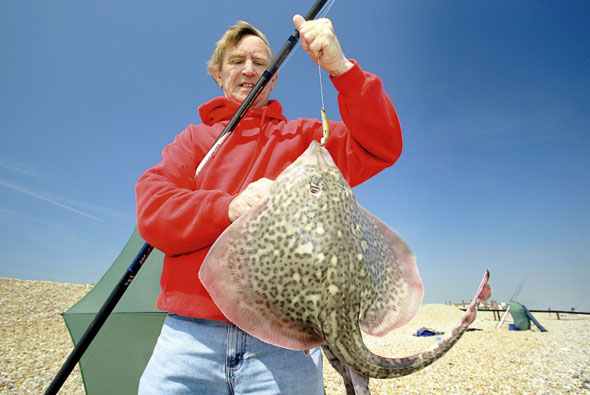 Stingrays are a very significant group of marine animals in terms of species composition. Stingrays are called the superorder of cartilaginous fish, which includes about 15 families and dozens of genera. All of them are united by an unusual appearance and lifestyle. Most species are marine inhabitants, but there are also freshwater ones. Fish are characterized by a flattened body and a long whip-like tail. On the upper side there are eyes and spritzes – breathing holes equipped with valves through which fish draw water into the gills. The gill plates themselves, the mouth and nostrils are on the underside of the fish, which is usually whitish in color. The outer side of the fish has a protective coloration corresponding to the living conditions. The scales in stingrays are reduced or turned into a certain type called placoid. Outwardly, it resembles plates with a spike, which creates an unusual structure, while the skin has an unusual texture. Often the extraction of this fish is associated with the use of stingray skin for various products. The size of the fish, respectively, varies greatly from a few centimeters to 6-7 m in length. Like all cartilaginous fish, stingrays have a highly developed nervous system that is directly connected to the sensory organs. Some species of stingrays can be dangerous to humans due to the presence of a sharp spike on the tail. And the family of electric rays have an organ with which they can paralyze with an electric discharge. The habitat of stingrays captures the waters of the entire oceans, from the Arctic and Antarctic to tropical seas. Most stingrays lead a benthic lifestyle, but there are also pelargic species. They feed on bottom animals: mollusks, crustaceans and others, pelargic – plankton. Russian fishermen living in the European part are best known for two species of stingrays that live in the waters of the Azov-Black Sea region: stingray (sea cat) and sea fox.

Taking into account the lifestyle, the main way to catch stingrays is bottom gear. An important factor in the choice of equipment is the size of the prey and fishing conditions. For catching medium-sized Black Sea fish, tackle is used, the power of which is associated, rather, with the casting distance and practicality. In general, all “donks” are very simple and designed to catch several types of fish. In addition, stingrays are predators and during active hunting they react to spinning lures and fly-fishing streamers.

For catching stingrays, depending on the region, different gear can be used. It depends on the size of the catch. As for fishing in the south of Russia, most anglers prefer to catch stingrays from the shore with “long-range” bottom rods. For bottom gear, various rods with a “running rig” are used, these can be both specialized “surf” rods and various spinning rods. The length and test of the rods should correspond to the chosen tasks and terrain. Just like with other sea fishing methods, there is no need to use delicate rigs. This is due to the conditions of fishing and the ability to catch a fairly large and lively fish. In many situations, fishing can take place at great depths and distances, which means that it becomes necessary to exhaust the line for a long time, which requires certain physical efforts on the part of the fisherman and increased requirements for the strength of tackle and reels, in particular. According to the principle of operation, the coils can be both multiplier and inertial-free. Accordingly, the rods are selected depending on the reel system. To choose a fishing spot, you need to consult experienced local anglers or guides. Fishing is best done at night, but stingrays are prone to self-securing, and therefore sitting near the rods all night is not necessary. When fishing, especially at night, it is worth remembering to be careful when handling fish because of the spikes.

When fishing with various bottom rigs, the best bait on the Black Sea coast is considered to be live bait from small coastal fish. For this, local medium-sized bulls are caught in advance and so on. It is important to keep the fish alive throughout the fishing trip. As already mentioned, stingrays can be caught as “bycatch” in spinning and fly fishing. Features of such fishing depend more on local conditions than on a particular fish.

The diversity of stingray species is reinforced by the extensive habitat. Fish are found in all oceans to a greater or lesser extent. The largest number of species probably belongs to the tropical and subtropical zones. Fish live at different depths and lead a varied lifestyle. Often approach the coastline. Pelargic species feed on plankton, and, hunting for it, pursue it in the vastness of the oceans. Freshwater species inhabit the rivers of Asia and America.

Rays, like sharks, have more diverse forms of reproduction. Females have internal genital organs with a primitive uterus. With internal fertilization, fish lay egg capsules or give birth to already formed fry.

2022-12-07
Previous Post: Blue bream fishing: ways to catch blue bream on a feeder in spring and summer
Next Post: Catching Scorpion on spinning: places for catching fish on float and bottom gear

22 most vegan cities in the world