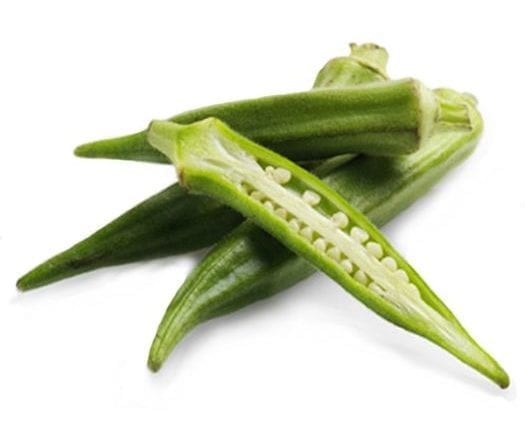 Okra, or in Latin – edible hibiscus (Hibiscus esculentus), other names for okra, gombo or ladies’ fingers are an annual herb from the malvaceous family. It is a plant with a very long growing season. Height varies depending on the variety from 20 cm (dwarf varieties) to 2 m (tall).

The plant has a thick high woody stem at the bottom, which is covered with hard hairs. The leaves are large, long-petiolate, light or dark green, rather large, with five to seven lobes, like the stem, pubescent. The flowers, which are similar to the usual garden mallow, are single, large, bisexual, yellowish-cream in color, located in the leaf axils on short pubescent pedicels. Okra fruits are finger-shaped bolls, from 6 to 30 cm long. Only young (3-6 days old) green ovaries are eaten, overripe dark brown fruits are completely tasteless. Okra fruits are eaten both fresh (they are put in salads), and boiled, stewed, fried. In addition, they are dried, frozen, and canned.

Unripe okra fruits together with seeds are put as a seasoning in soups and sauces, which from this acquire a very pleasant velvety taste and viscous consistency. Unripe seeds – round, dark green or olive, can easily replace green peas, and mature and roasted seeds are used to make gombo coffee.

There are quite a few varieties of okra and they differ significantly in habit, ripening times, shape and size of fruits. For example, in the State Register you can find the following varieties: White Cylindrical, White Velvet, Green Velvet, Dwarf Greens, Ladies Fingers (by the way, the translation of the English name of the plant sounds like that), Juno. But for many centuries, okra was also a medicinal plant.

Tropical Africa is considered the homeland of okra; in a wild state, it is still preserved in Nubia in the Blue Nile region. Archaeologists and paleobotanists have found traces of this plant in the area of ​​human sites during the Neolithic. In Sudan, this crop has been cultivated for about six thousand years. For thousands of years, in their homeland, okra has been used for food not only the young fruits we are used to, but also the leaves. Strong fiber was obtained from the stems for making ropes and sacks. Ripe seeds in the Arab East were used, pre-roasted as a coffee substitute. Sometimes the seed powder was deliberately added to coffee to soften the taste and impart a musky aroma. In general, the Latin name for the plant, Abelmoschus, comes from the Arabic habb-al-misk, which means “son of musk.” Musk was very revered in the East and everything that reminded of it was treated with great reverence. Sometimes these same roasted seeds were added when making sorbet (sherbet). In addition, mature seeds contain up to 25% fatty oil, which has been used as food or for filling oil lamps.

During the period of the Arab conquests, okra comes to Spain, where it is firmly included in the Spanish cuisine, and from there it begins to move through Europe, primarily southern. It is very popular in several countries of Southern Europe (Bulgaria, Greece), America, Africa and Asia. Okra was cultivated in India during the early Neolithic. Archaeologists have discovered trade environments between pre-Aryan culture and the people of East Africa. In Indian cuisine, okra is used to make chutneys and, due to its slimy consistency, to thicken soups. By the way, to this day, India holds the record for the production of okra – 5,784,000 tons, which is more than all other countries combined.

Okra came to the American continent a long time ago. It is believed that she originated with the first black slaves from Africa, who used okra as a magical plant for the Voodoo cult. And there the plant was enthusiastically received by the local population. For example, its appearance in Brazilian cuisine dates back to the beginning of the 17th century, and its spread in North America – the beginning of the 13th century. In the modern United States, it is popular mainly in the southern states, and is associated with Creole and African American cuisine. In Russia, this crop is grown only on small plantations in the Krasnodar and Stavropol Territories.

Okra is a thermophilic plant, but in our region it can also be successfully grown through seedlings, and an example of such a successful truck gardening was the harvest of okra in the Melekhovo estate under A.P. Chekhov. Okra seeds sprout slowly – 2-3 weeks. Before sowing, they are soaked in warm water for a day. It is better to sow in peat pots or cassettes, since this culture does not tolerate transplanting well. Okra has a weakly branched taproot and when plants are planted without a clod of earth, at best they get sick for a long time, and at worst they simply die. The optimum temperature for growing seedlings is + 22 + 24 ° C. Plants are planted in open ground in well-warmed soil after the danger of spring frosts has passed; in the Moscow region it is the beginning of June or a little earlier, but with the possibility of shelter. Okra prefers sunny locations and light fertile soil. Before planting, you need to add superphosphate – like any plant from which fruits are harvested, okra requires increased doses of this element. Landing scheme 60×30 cm.

Care – loosening the soil, weeding and watering. The culture is drought-resistant, but in dry weather and during the fruiting period it requires regular and abundant watering. It blooms about 2 months after germination. 4-5 days after the flower wilts, a fruit is formed, which must be collected. Older fruits are coarser and less tasty. Cleaning every 3-4 days continues until frost, that is, until the death of the plant. As already mentioned, okra plants are covered with dense pubescence, and some people contact with hairs causes allergies and itching.

Like most vegetable plants, okra can be plagued by diseases and pests. Powdery mildew can cause great harm. It appears as a profuse white bloom on both sides of the leaf and other parts of the plant. The causative agent of the disease hibernates on plant debris. In order to avoid its spread, plant residues are promptly removed and weeds are systematically removed around the greenhouse, which are the first to be affected by powdery mildew and are carriers of the disease: plantain, comfrey, sow thistle.

Brown spot affects the plant at high humidity in greenhouses and hotbeds. On the upper side of the leaves of plants, yellowish spots appear, on the lower – a bloom at first light, then dark brown. With severe damage, the leaves turn brown and dry out. The causative agent of the disease hibernates on plant debris.

Thrips is a small insect that parasitizes mainly in greenhouses. Due to their fertility, thrips can damage a large number of plants in a short time. Whitish-yellow spots appear on the leaves from their pricks, the leaves, with severe damage, turn brown and dry out.

When thrips appears, infusions and decoctions of insecticidal plants of bitter pepper (50 g / l), wormwood (100 g / l) are used, as a more exotic option – peels of orange, tangerine, lemon (100 g / l). For better adhesion, 20-40 g of laundry soap per 10 liters is added to the solution before spraying.

The cabbage scoop, the caterpillars of which appear by the middle or end of May, are unusually voracious. They eat up almost all the leaves, leaving only the veins. With a small number, caterpillars are harvested manually, and with a very large number – spraying with biological preparations: bitoxibacillin or lepidocide (40-50 g per 10 l of water).

In wet years, slugs can attack okra, with which they fight in traditional and all possible ways: they remove weeds, carefully loosen the soil, arrange traps under which slugs hide, sprinkle the aisles with ash, lime or superphosphate, and also place beer in trays on which they together slide down.

And the question arises – what are all these tricks for? Are there really few other, less capricious vegetables?

Useful and medicinal properties of okra

Okra fruit contains carbohydrates, primarily fiber and pectin. If the former is very important for digestion and normal functioning of the intestines, then the activity of pectins is much more multifaceted and interesting. Plants containing a large amount of pectins have the ability to remove all kinds of toxins and even radionucleides from the body. Pectins have good sorbing properties and “collect”, like a vacuum cleaner, passing through the gastrointestinal tract, all unnecessary. And all this is safely evacuated from the body. It has been noted that regular consumption of okra dishes helps to regulate intestinal functions and eliminate problems such as bloating, constipation, and, accordingly, prevent the associated intoxication of the body. In modern studies, it is noted that regular consumption of okra helps to normalize cholesterol, which, in turn, serves as the prevention of cardiovascular diseases. In addition, it is currently assumed that the timely removal of toxins from the body is the prevention of many chronic diseases, and sometimes oncology, primarily of the intestine. Experts believe that okra can be used to improve the effectiveness of the treatment of diabetes, pneumonia, arthritis, asthma, and many other ailments. In addition, due to this cleansing effect, it is useful to include it in the diet for chronic fatigue, after or during the intake of a large amount of medication, and to improve the general tone of the body.

Due to the content of all the same pectins and mucus, okra is a good anti-inflammatory and coating agent. Boiled okra can be used as food for gastritis, colitis. Also, due to its enveloping and emollient properties, a decoction or boiled fruits of okra are used for colds. To do this, prepare a decoction of the fruits, boiling them to the consistency of jelly. This broth must be used to gargle with sore throat or taken internally (slightly sweetened as desired) for bronchitis, tracheitis, pharyngitis.

In addition, okra contains organic acids, vitamin C, minerals, B vitamins and folic acid, which is essential for many bodily functions.

But there are very few calories in this vegetable. Being a dietary product, okra is an excellent component of low-calorie diets and can be used for overweight and diabetes.

This vegetable is believed to be beneficial for those suffering from various eye conditions and those who are at high risk of developing cataracts.

Ingredients for the recipe:

Recipe preparation: Fry the garlic in olive oil in a skillet under the lid at medium temperature until golden brown. Add okra and onion, season with salt and pepper and fry until soft, 10 – 12 minutes. Stir in the tomatoes, cook for 3 minutes. Then add some apple cider vinegar.

Problems of testing chemistry on animals