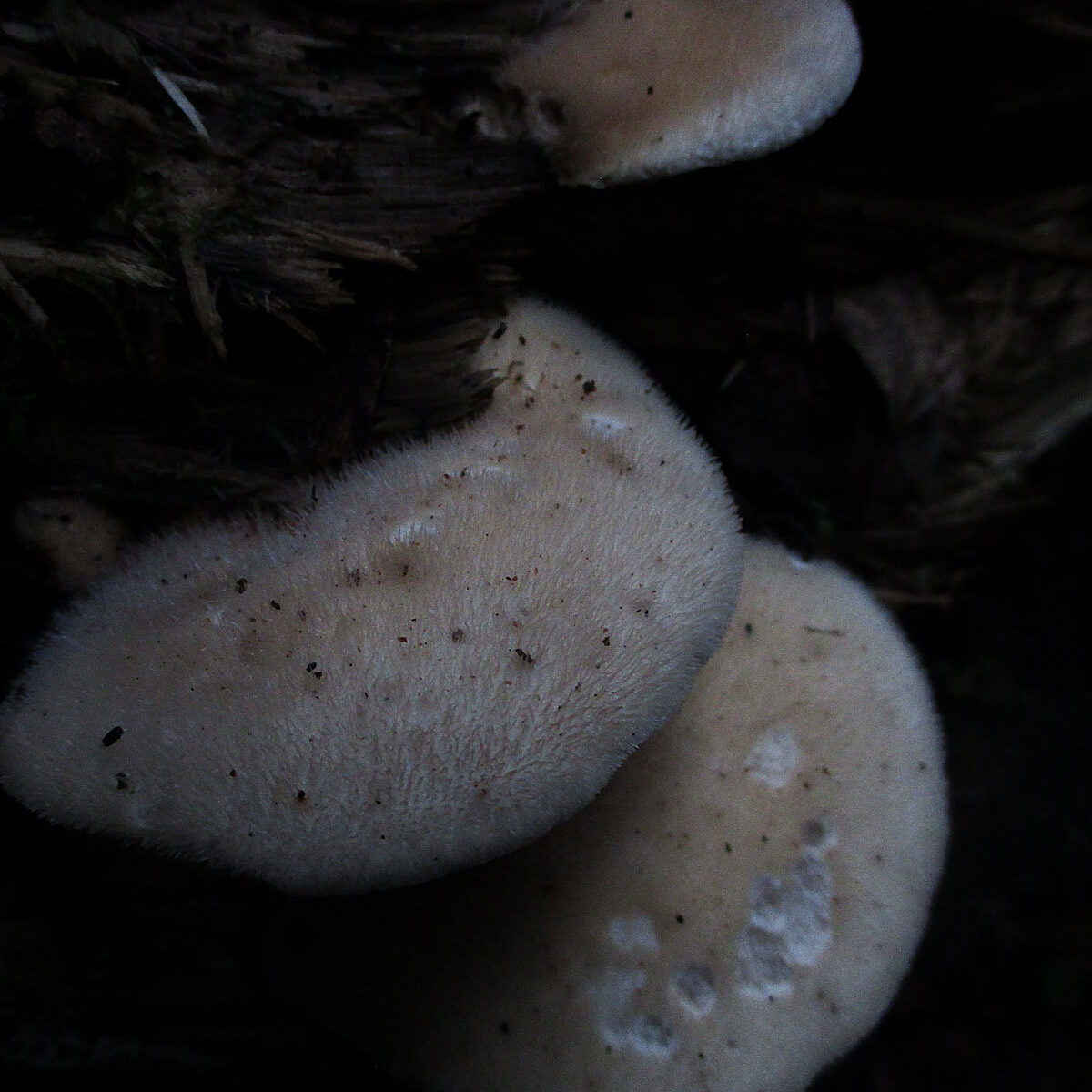 The absence of a , and even more so “folk” name, indicates that Vetlinsky lignomyces is a little-known mushroom in Our Country. For a long time, Lignomyces was considered endemic to Central Europe, and in the USSR it was mistaken for nested phyllotopsis (Phyllotopsis nidulans) or elongated pleurocybella (Pleurocybella porrigens), for this reason, lignomyces eluded the closer attention of mycologists. Recently, several specimens have been found in Our Country, which, after studying the DNA isolated from these samples, were assigned to the species Lignomyces vetlinianus. Thus, it has been scientifically proven that the distribution range of the species is much wider than previously thought, and the interest of domestic mycologists in this wonderful fungus has increased significantly, which cannot but rejoice.

Fruit body annual, growing on wood, convex semicircular or kidney-shaped, deeply attached to the substrate with the side, the largest diameter is 2,5-7 (up to 10) cm, 0,3-1,5 cm thick. The surface of the cap is white, pale yellow , cream. Felt, densely covered with white or yellowish hairs from 1 to 3 mm tall. Longer villi may be undulating. The edge of the cap is thin, sometimes lobed, in dry weather it can be tucked up. 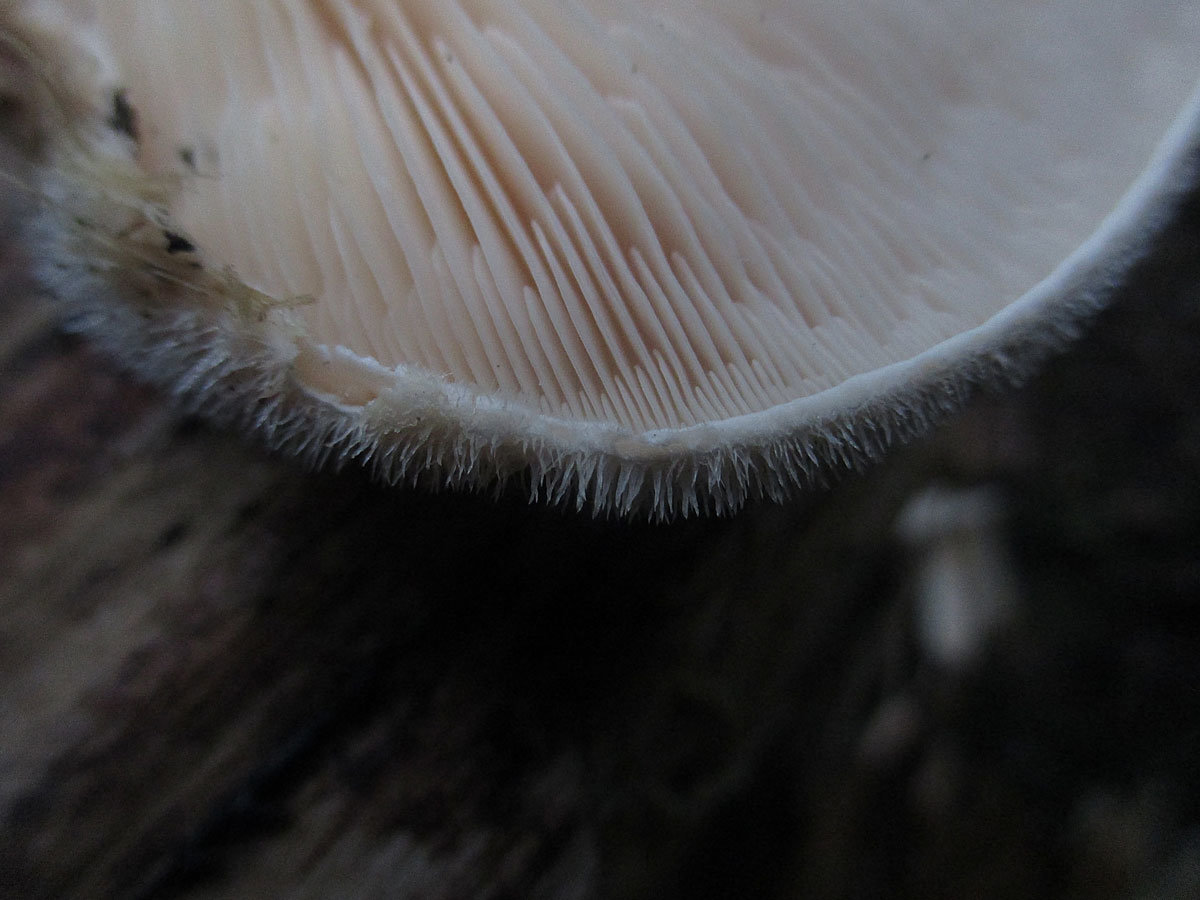 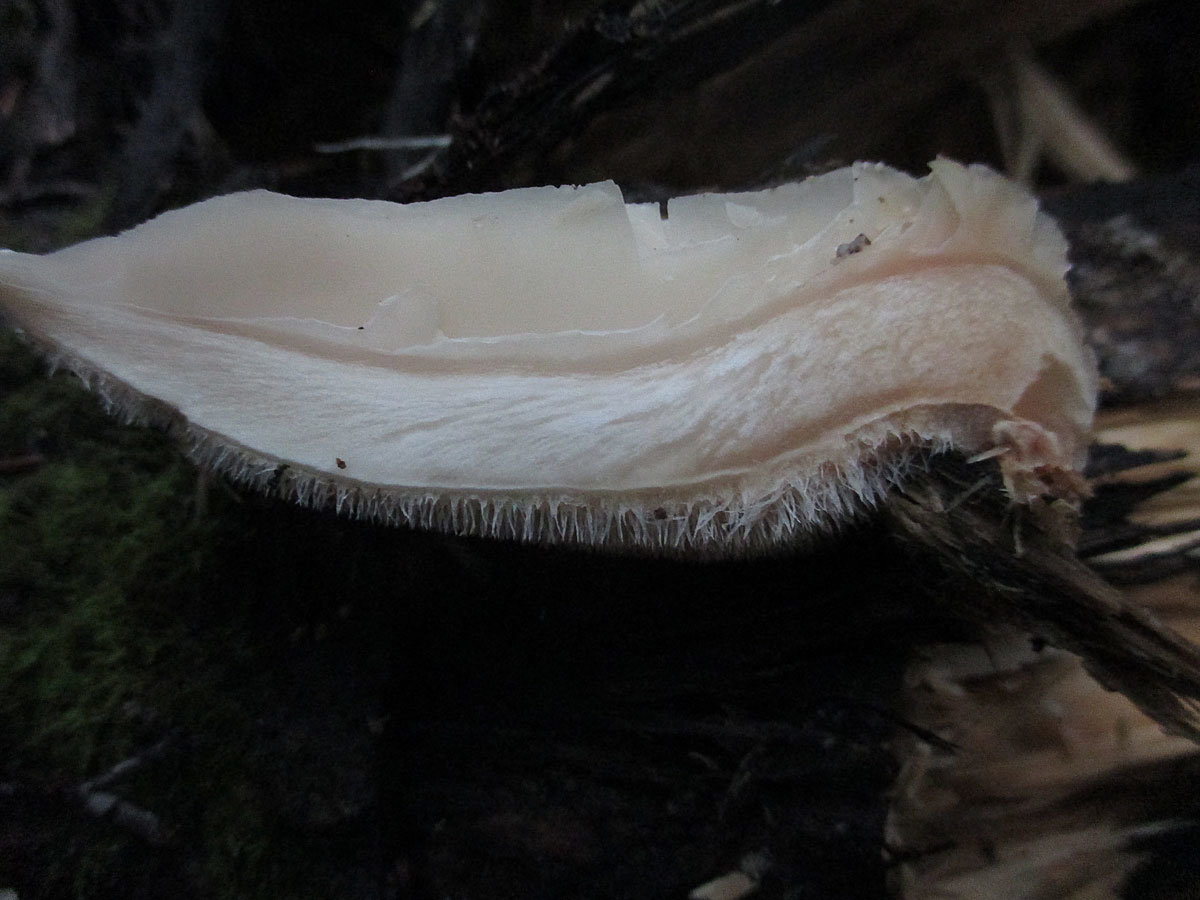 Hymenophore lamellar. The plates are fan-shaped, radially oriented and adherent to the place of attachment to the substrate, infrequently wide (up to 8 mm) with plates, whitish-beige in young mushrooms, soft with a smooth edge. In old mushrooms and in dry weather, they darken to a yellow-brown color, become sinuous and hard with a gelatinous layer along the edge, the edge of some plates sometimes turns darker, almost brown. There are specimens with blade edges serrated at the base. 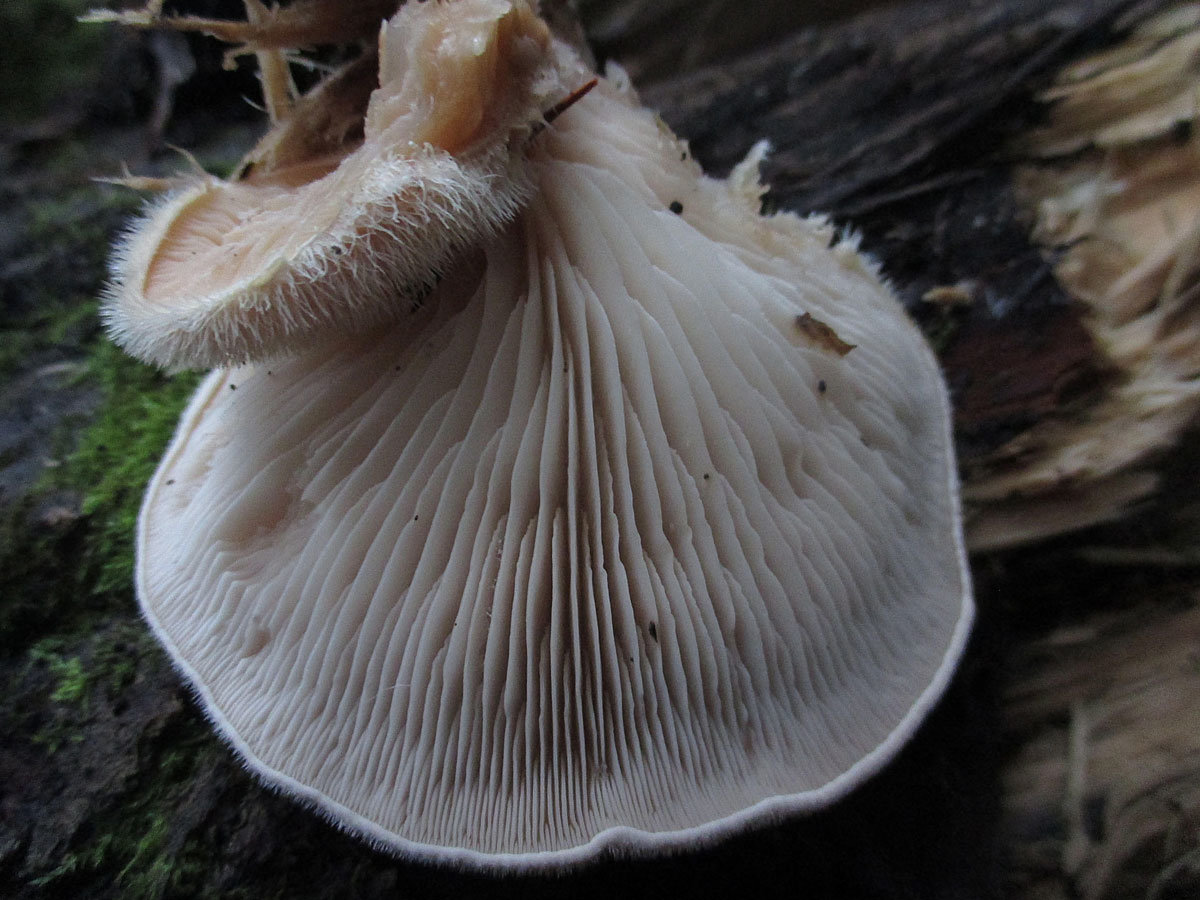 Hyphal system monomitic, hyphae with clamps. In the cap trama, the hyphae are 2.5–10.5 (ampulloidal swellings up to 45) µm in diameter, with pronounced or thickened walls, and bear resinous-granular or crystalline deposits.

The hyphae of the gelatinous layer of the trama are thick-walled, averaging 6–17 µm in diameter. In the mediostratum of the plates, the hyphae are densely intertwined, rapidly swelling in KOH, 1.7–3.2(7) µm in diameter.

Basidiospores 7–9 x 3.5–4.5 µm, ellipsoid-cylindrical, in some projections arachisform or indistinctly reniform, with a slightly recurved base, thin-walled, non-amyloid, cyanophilic, smooth, but sometimes with lipid globules adhering to the surface.

Lignomyces Vetlinsky is a saprotroph on the deadwood of deciduous trees (mainly aspen) both in mountainous and lowland biotopes in coniferous-broad-leaved and taiga forests. It occurs infrequently singly or in clusters of several specimens (often 2-3), from June to September.

The distribution area is Central Europe, the eastern and southern regions of the Carpathians, in Our Country it was found and reliably identified in the Sverdlovsk and Moscow regions. Due to the fact that the fungus is one of the little-known taxa, it is very likely that its distribution area is more extensive.

Lignomyces Vetlinsky resembles some types of oyster mushrooms, from which it differs in a gelatinous layer and a densely hairy cap surface.

The hairy-scaly sawfly (Lentinus pilososquamulosus), which grows mainly on birch and is common in the Far East and Siberia, is similar to such an extent that some mycologists tend to consider the hairy-scaly sawfly and Vetlinsky lignomyces to be one species, however, there is an opinion that there is still an essential macrocharacter by which these types of fungi can be distinguished is the color of the plates. In Lentinus pilososquamulosus they are salmon in color.

Where to get calcium without eating dairy products

Booming vegan food business set to save the world

Kashi – tasty, healthy and not boring at all!