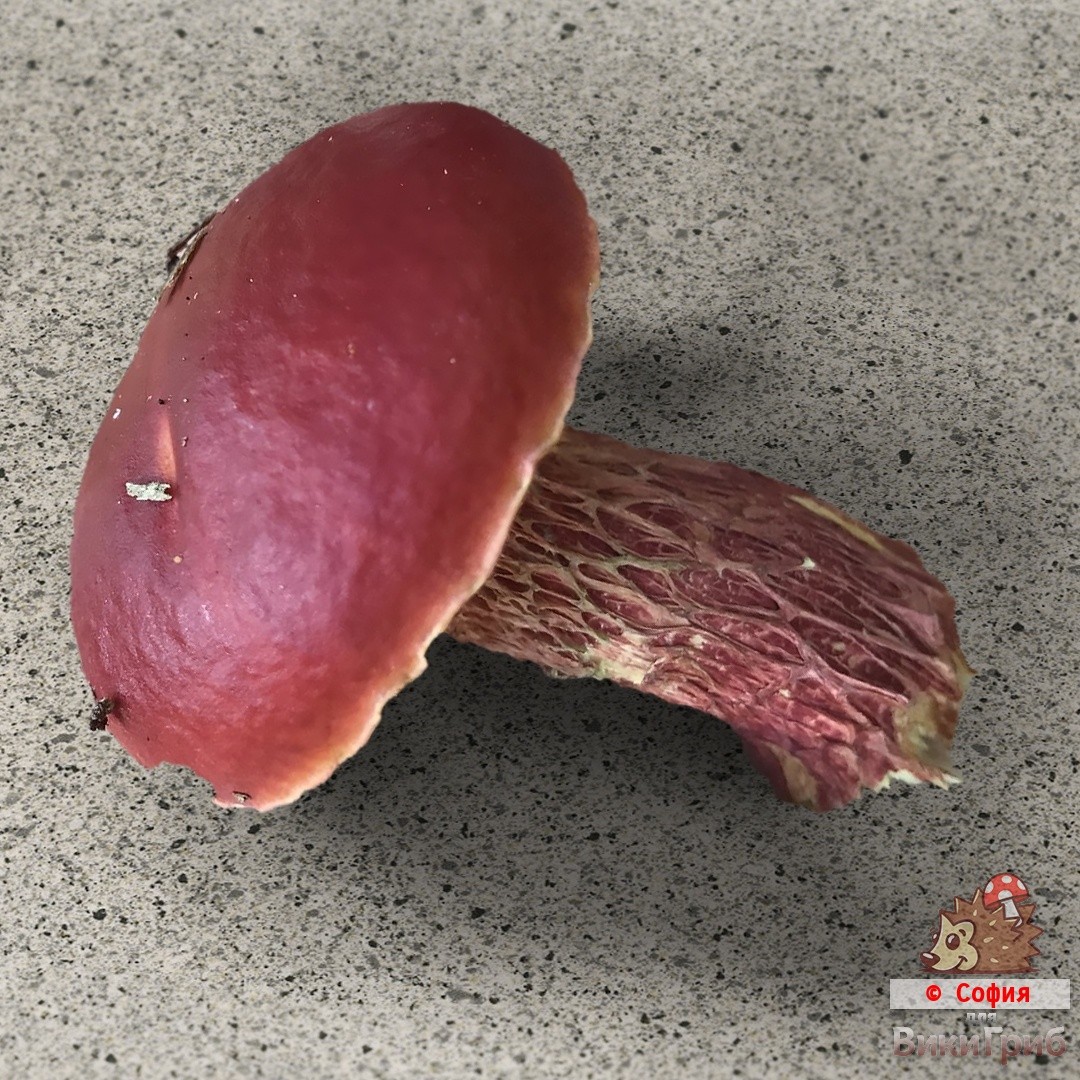 Boletus Frost (Butyriboletus frostii) previously belonged to the genus Boletus (lat. Boletus) of the Boletaceae family (lat. Boletaceae). In 2014, based on the results of molecular phylogenetic analysis, this species was moved to the genus Butyriboletus. The very name of the genus – Butyriboletus comes from the Latin name and, in literal translation, means: “butter mushroom oil”. Panza agria is a popular name in Mexico, translated as “sour belly”.

head, reaching up to 15 cm in diameter, has a smooth and shiny surface, becomes mucous when wet. The shape of the cap in young mushrooms is hemispherical convex, as it matures it becomes broadly convex, almost flat. The coloration is dominated by red tones: from dark cherry red with a whitish bloom in young specimens to a duller, but still bright red in ripe mushrooms. The edge of the cap can be painted in a pale yellow color. The flesh is lemon-yellow in color without much taste and smell, quickly turns blue on the cut.

Hymenophore mushroom – tubular dark red fading with age. At the edge of the cap and at the stem, the color of the tubular layer can sometimes acquire yellowish tones. The pores are rounded, rather dense, up to 2-3 per 1 mm, the tubules are up to 1 cm long. In the tubular layer of young mushrooms, after rains, one can often observe the release of bright yellow drops, which is a characteristic feature during identification. When damaged, the hymenophore quickly turns blue.

Leg Boletus Frost can reach 12 cm in length and up to 2,5 cm in width. The shape is most often cylindrical, but may slightly expand towards the base. A distinctive feature of the stem of this mushroom is a very prominent wrinkled mesh pattern, thanks to which it is quite easy to distinguish this mushroom from others. The color of the stem is in the tone of the mushroom, that is, dark red, the mycelium at the base of the stem is whitish or yellowish. When damaged, the stem turns blue as a result of oxidation, but much more slowly than the flesh of the cap. 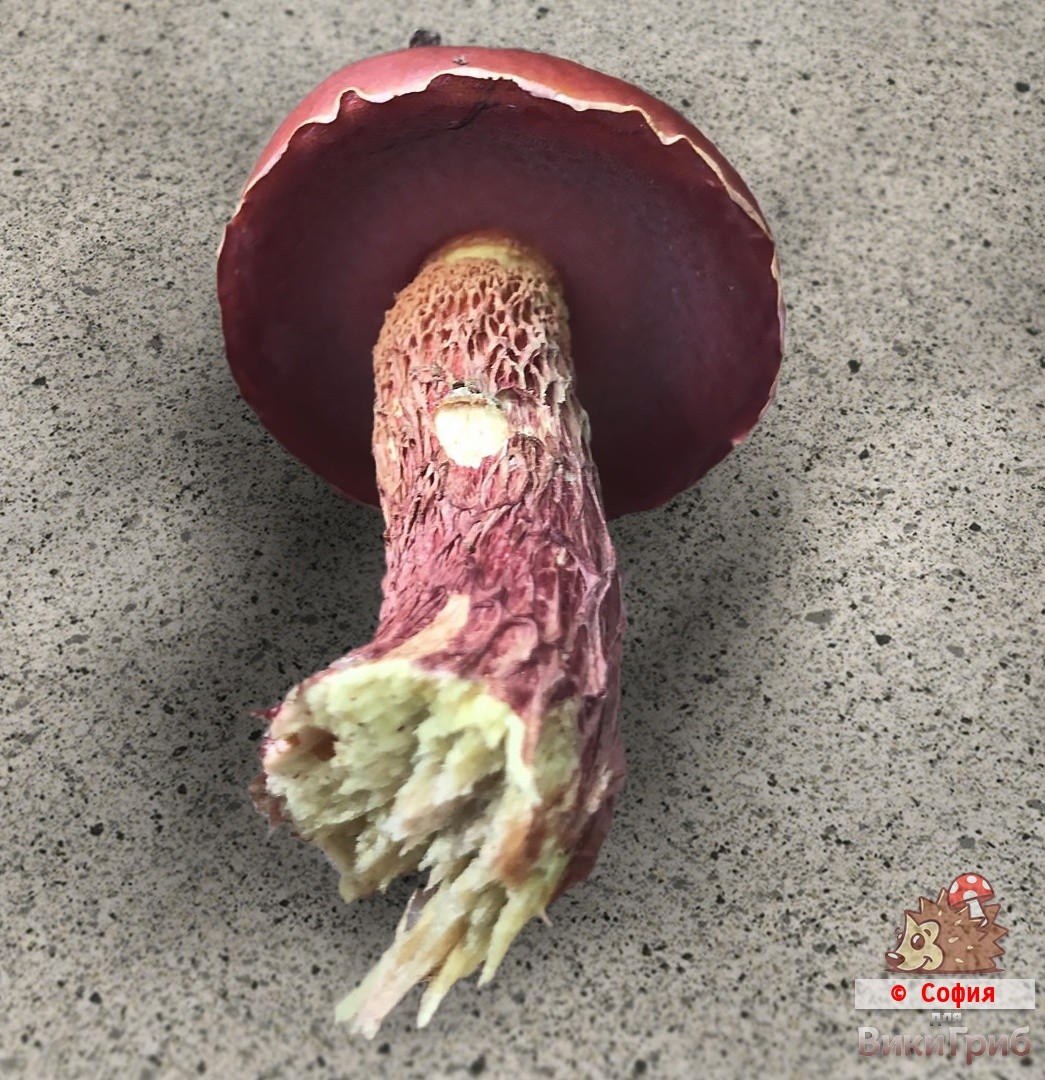 ectomycorrhizal fungus; prefers places with a warm and temperate climate, lives in mixed and deciduous forests (preferably oak), forms mycorrhiza with broad-leaved trees. Pure cultivation methods have shown the possibility of mycorrhiza formation with virgin pine (Pinus virginiana). It grows singly or in groups on the ground under trees from June to mid-autumn. Habitat – North and Central America. Widely distributed in the United States, Mexico, Costa Rica. It is not found in Europe and on the territory of Our Country and the countries of the former USSR.

Universal edible mushroom of the second taste category with excellent taste characteristics. It is valued for its dense pulp, which has a sour taste with hints of citrus zest. In cooking, it is used both freshly prepared and subjected to common types of preservation: salting, pickling. The mushroom is also consumed in dried form and in the form of mushroom powder.

Boletus Frost has almost no twins in nature.

The most similar species, which has the same distribution area, is Russell’s boletus (Boletellus russellii). It differs from Butyriboletus frostii in having a lighter, velvety, scaly cap and yellow hymenophore; in addition, the flesh does not turn blue when damaged, but turns even more yellow.

How to Quit Smoking Quickly: 9 Tips

How to use garlic for various ailments

Vegetarian diets in the treatment of rheumatoid arthritis

The human brain has the ability to change, restore and heal, regardless of age