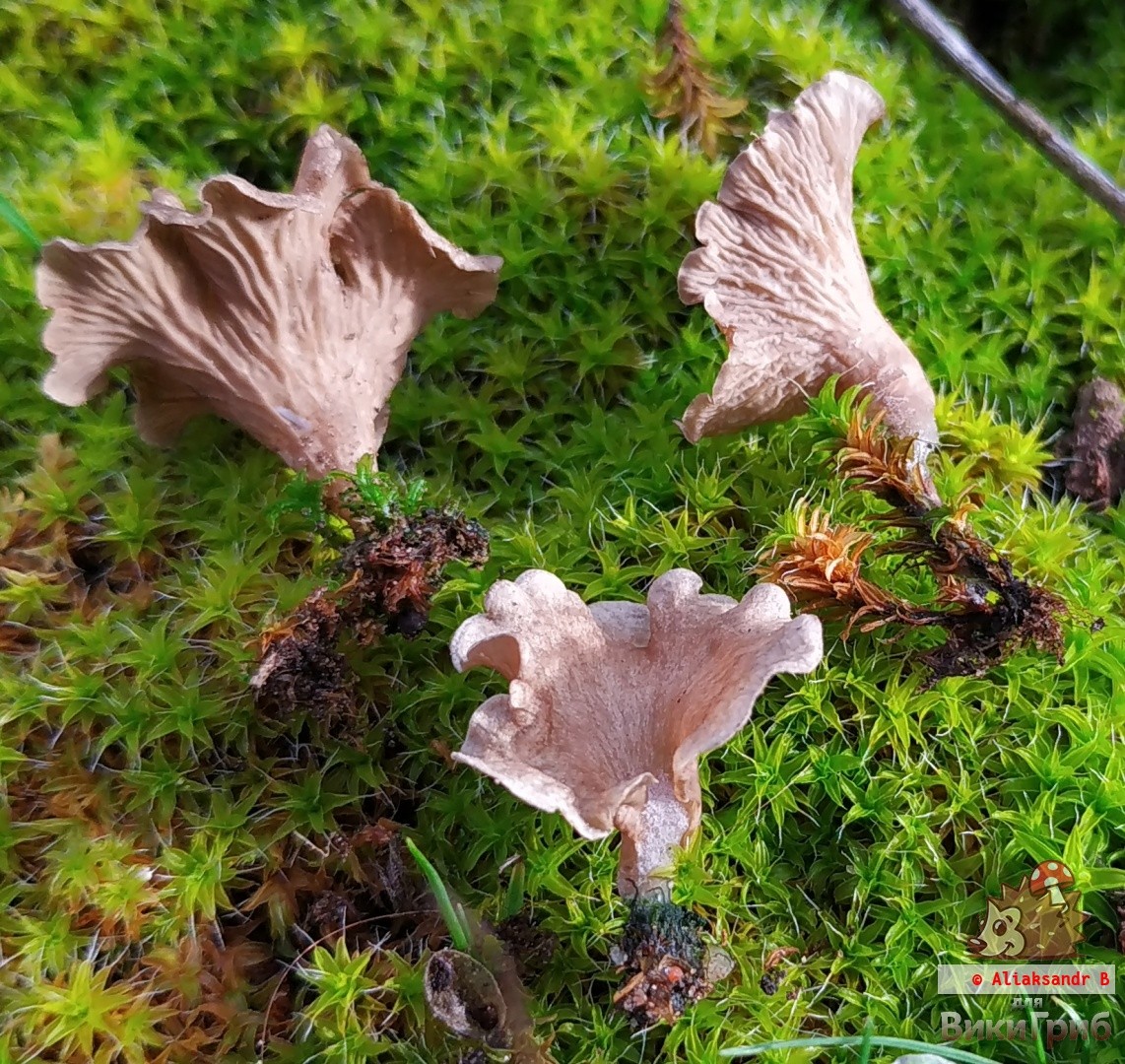 The full scientific name of this species is Arrhenia spathulata (Fr.) Redhead, 1984.

At a young age, it really has the appearance of a rounded spoon, turned outward. With age, Arrenia takes the form of a fan with a wavy edge, wrapped in a funnel.

The body of the mushroom is quite thin, but not brittle, like cotton material.

The size of the fruiting body is 2.2–2.8 x 0.5–2.2 cm. The color of the mushroom is from gray, gray-brown to light brown. The fungus is hygrophanous and changes color depending on moisture. May be transversely zonal.

Pulp the same color as the fruiting body on the outside.

Smell and taste inconspicuous, but quite pleasant. 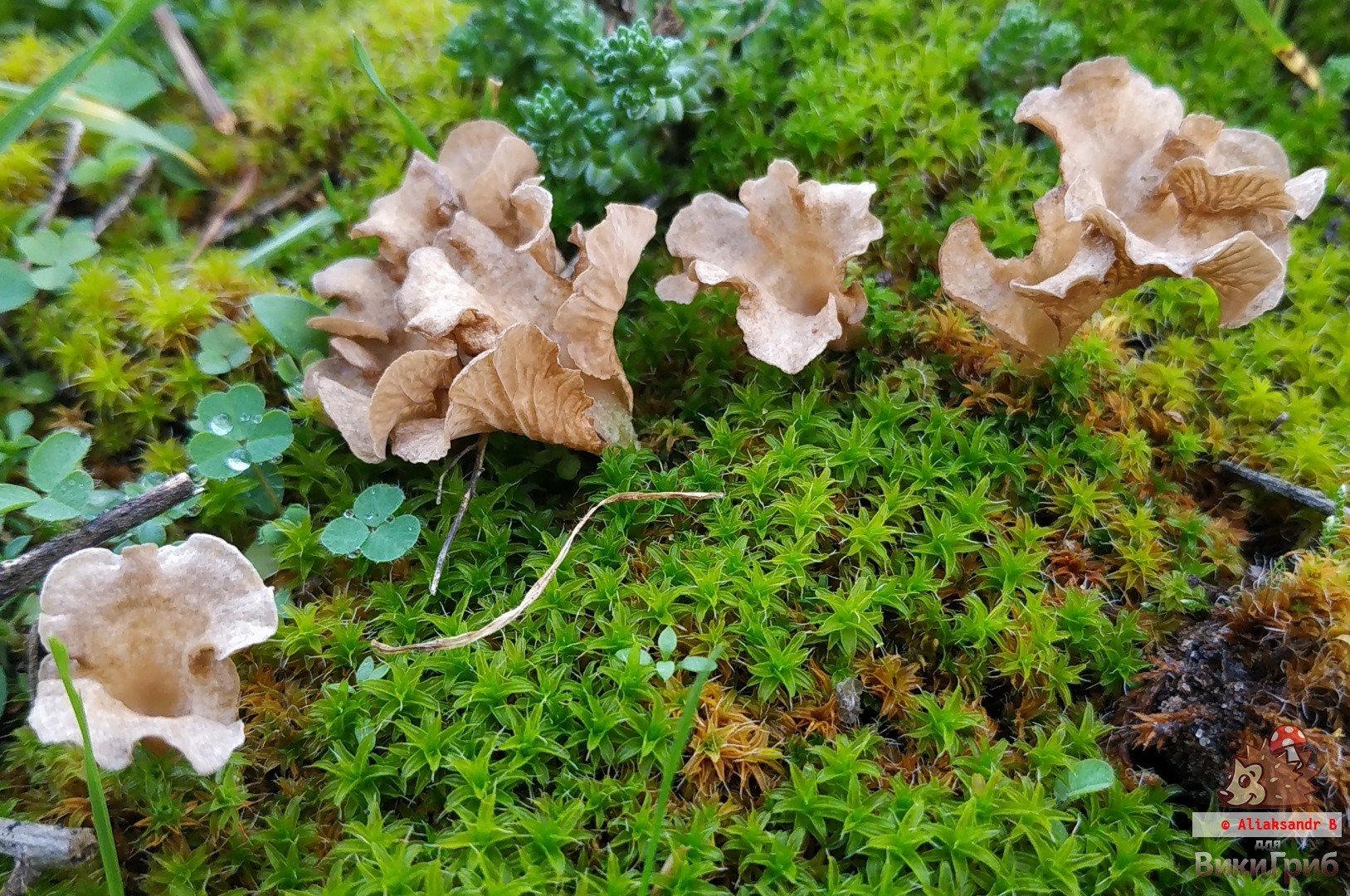 Hymenophore: plates in the form of wrinkles, resembling protruding veins, which branch and merge together.

At a young age, they can be practically invisible.

The color of the plates is the same as that of the fruiting body or slightly lighter.

Leg: Arrenia spatula has a short and dense stem with a hairy base, but may be naked. About 3-4 mm. in length and not more than 3 mm. in thickness. Lateral. The color is not bright: whitish, yellowish or gray-brown. Almost always covered with moss, on which it parasitizes. 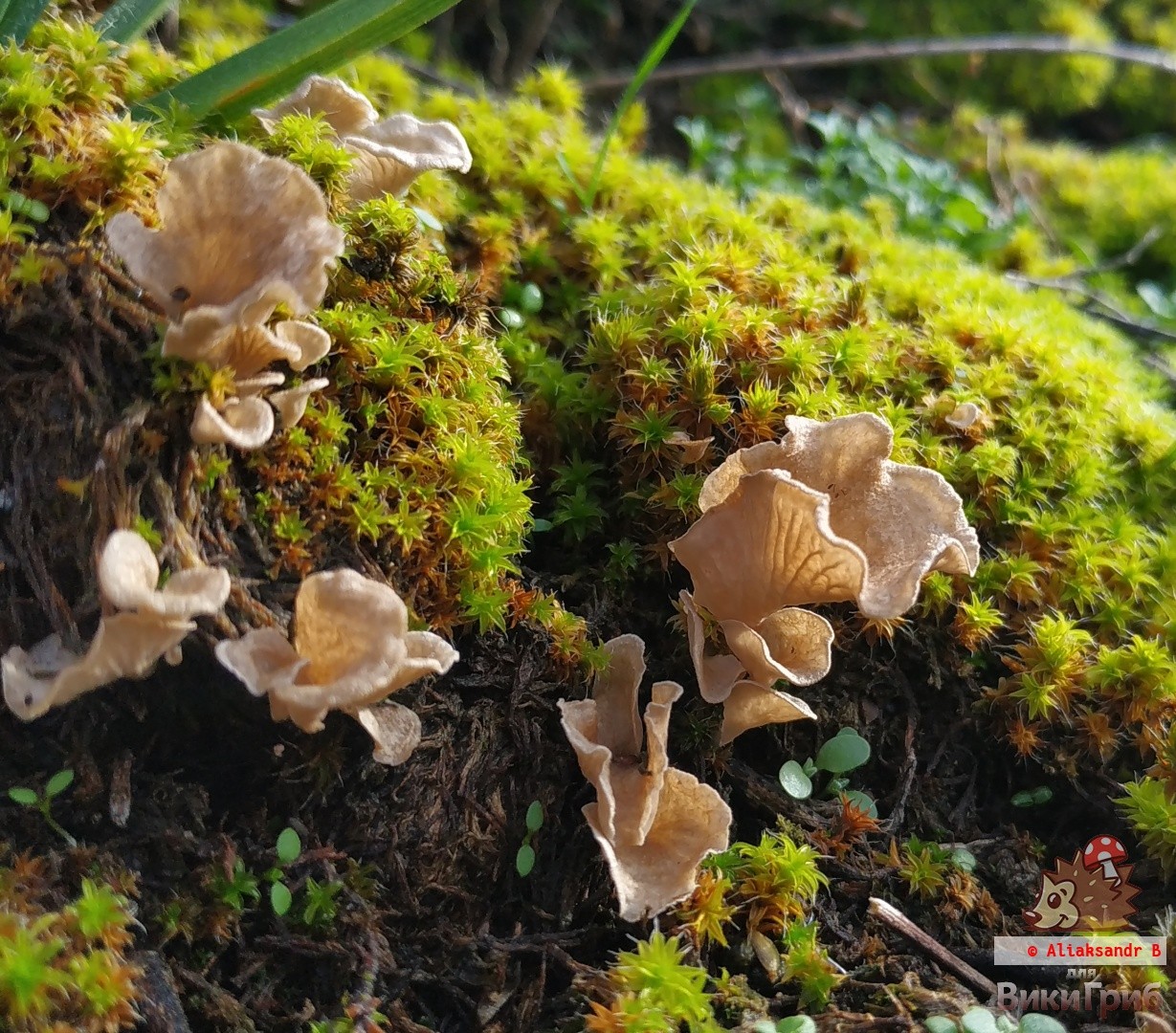 You can meet Arrenia in dry places with sandy soils – dry forests, in quarries, embankments, roadsides, as well as on rotten wood, on roofs, in rocky dumps. Since it is precisely such places that its host plant Syntrichia field prefers.

This fungus is distributed throughout most of Europe, as well as in Turkey.

But, according to some reports, it grows from spring to autumn.

The mushroom is not edible.

Arrenia spatula can only be confused with other species of the genus Arrenia.

Arrenia lobata in its appearance is practically a twin of Arrenia spatula.

The same ear-shaped fruiting bodies with a lateral stalk also prositize on mosses.

The main differences are larger fruiting bodies (3-5 cm), as well as the place of growth. Arrhenia lobata prefers mosses that grow in damp places and in marshy lowlands.

In addition, it can be given out by a more pronounced folding of the fruiting body and an inverted edge, as well as a more saturated color. However, it is worth noting that these differences may not be pronounced.

A very small fungus (up to 1 cm), parasitic on mosses.

It differs from Arrenia spatula not only in its smaller size and lighter color. But, mainly, the complete or almost complete absence of the legs. The fruit body of Arrenia discoid is attached to the moss in the center of the cap or eccentrically, up to the lateral attachment.

In addition, she has a faint aroma, reminiscent of the smell of room geraniums.

Vegan director James Cameron: You can’t be a conservationist if you eat meat

What is useful for chicken broth?

Achieving goals: how to set goals and achieve them

Social media and its impact on our health