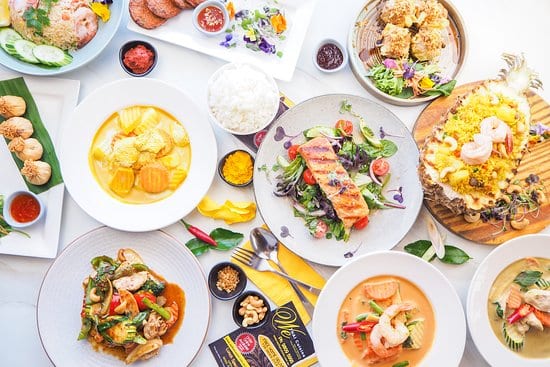 Thai cuisine is considered not only one of the most exotic, but also one of the most healthy, delicious and original. It has developed over several centuries under the influence of the culinary traditions of Indian, Chinese, Malaysian and European cuisines. As a result, amazing dishes were born, surprisingly combining notes of sourness, sweetness, pungency, bitterness and salt.

Perhaps the hallmark of authentic Thai cuisine is the approach of local chefs to cooking. They prefer to use only the freshest and highest quality products, which lend themselves to minimal heat treatment over the fire. Moreover, in this case we are talking not only about fruits and vegetables, but also about fish and meat. For example, frying is carried out over high heat with constant stirring. Moreover, all products, including meat, are cut into small pieces and fried for no more than 8-10 minutes.

Thais also love to improvise in the kitchen. By the way, it was thanks to improvisation that the unique Thai national cuisine appeared. The thing is that the inhabitants of Thailand borrowed the best dishes from representatives of other cuisines, and then, experimenting, turned them into something special and unique in its kind. Moreover, Thais believe that everyone knows how to cook deliciously and assure that there are no bad cooks. There are simply bad foods. Not many people know that in Thailand they eat only freshly prepared dishes. And the concept of reheating yesterday’s food simply does not exist here.

Modern Thai cuisine has its origins in the mountainous settlements of southwestern China, since they were originally the birthplace of Thai tribes. In the VI-XIII centuries. Thais moved to the southern lands, which are currently the territory of Thailand and Laos, and at the same time began to actively use game, fish and various gifts of the tropics in their cuisine. Several centuries later, Eastern spices and sweets were tasted here, and they also learned about the European traditions of eating food using cutlery and immediately borrowed them.

Despite the desire of many European chefs to cook popular dishes of national Thai cuisine in their homeland, its real connoisseurs claim that their true taste can be felt only in Thailand. Today, there are 4 varieties of national Thai cuisine, depending on the region of origin. it central, south, north and north-east… Their main differences lie in the peculiarities of the preparation of local dishes. But they are all, no doubt, worth trying.

The main products of Thai cuisine

Thai cuisine is based on rice. White, brown, black, jasmine, red, or gooey. In fact, there are a lot of varieties of rice here. At the same time, it completely replaces bread for Thais. Thanks to the thriving agriculture in Thailand, grains, various vegetables and fruits, as well as all kinds of fish and seafood are very popular here.

Along with this, there are special dishes here, which are real masterpieces and are a kind of visiting card of the country, for which many people come here:

Tom yum – spicy and sour soup with seafood and chicken

Chuk is a special rice porridge that is usually served for breakfast.

Fermented rice with noodles. Pork blood, tofu, tomatoes and pork broth sauce are used as a base

Som Tam is a grated salad made from papaya, peanuts, fish sauce, chili, garlic, beans and lime juice. There are 3 types of this salad: with salted fish gourami, with dried shrimps or with crab meat

Fried sausage based on minced pork with the addition of herbs

Due to the variety of food products and their high quality, as well as the low calorie content of Thai dishes and the minimal heat treatment to which they lend themselves during the preparation process, Thai cuisine is rightfully considered one of the healthiest. Gaining weight on Thai food is very difficult, but rejuvenating and improving your well-being is as easy as shelling pears. This is explained by the fact that Thai dishes are seasoned with a lot of spices, which have a positive effect on the entire body. Moreover, spices are also excellent antioxidants that strengthen the immune system, have anti-inflammatory properties, relieve insomnia and give you an excellent mood for the whole day.

In addition, in Thailand, sharpness is a guarantee of health. The hot tropical climate is favorable for the development of various bacteria, the growth of which is suppressed by the use of spices. In addition, it is the spices that help to retain moisture in the body and increase the overall tone.

Life expectancy in Thailand is 71 and 75 years for men and women, respectively. The most common diseases here are considered malaria, intestinal infections (they can be caught not only with food, but also while sunbathing on the beach), as well as hepatitis. However, the standard of living in Thailand is considered to be quite high.

Based on materials Super Cool Pics