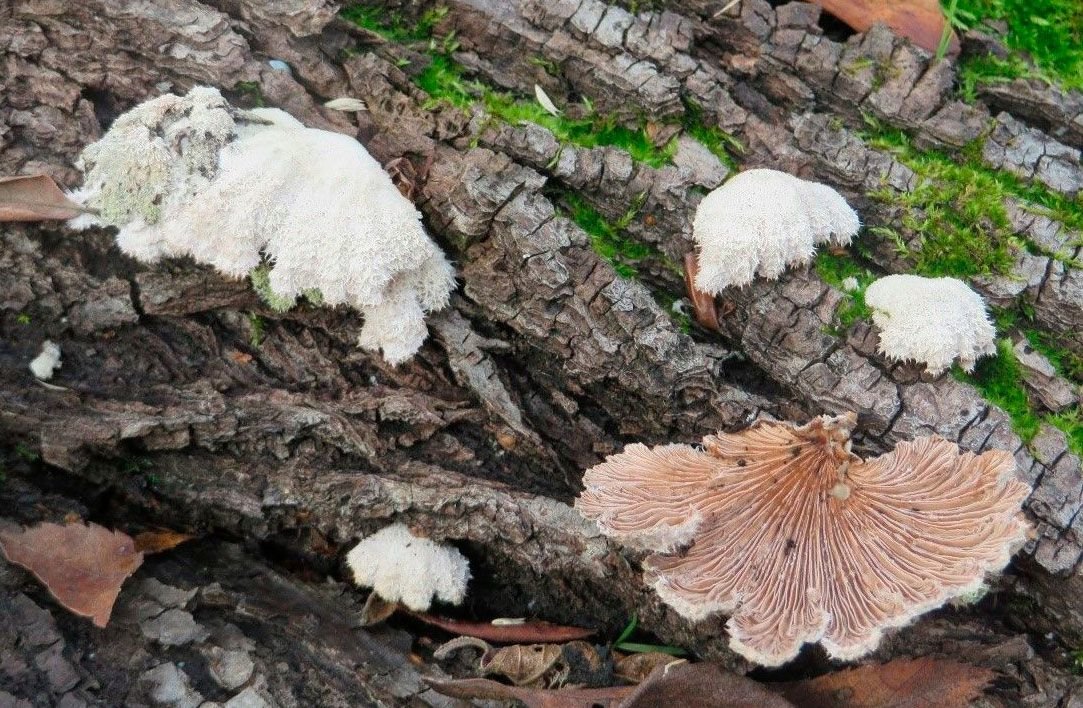 The fruiting body of the common slit leaf consists of a sessile fan-shaped or shell-shaped cap 3–5 centimeters in diameter (when growing on a horizontal substrate, for example, on the upper or lower surface of a lying log, the caps can take a bizarrely irregular shape). The surface of the cap is felt-pubescent, slippery in wet weather, sometimes with concentric zones and longitudinal grooves of varying severity. White or greyish when young, it becomes greyish-brown with age. The edge is wavy, even or lobed, hard in old mushrooms. The leg is barely expressed (if it is, then it is lateral, pubescent) or absent altogether.

The hymenophore of the common slit leaf has a very characteristic appearance. It looks like very thin, not very frequent or even rare, emanating from almost one point, branching and split along the entire length of the plates – from where the fungus got its name – but in fact these are false plates. In young mushrooms, they are light, pale pink, grayish-pinkish or grayish-yellowish, darkening to grayish-brownish with age. The degree of gap opening in the plates depends on the humidity. When the fungus dries, the gap opens and adjacent plates close, protecting the spore-bearing surface and thus being an excellent adaptation for growing in areas where precipitation falls sporadically.

The pulp is thin, concentrated mainly at the point of attachment, dense, leathery when fresh, firm when dry. The smell and taste are soft, inexpressive.

Common slit-leaf also grows singly, but most often in groups, on dead wood (sometimes on living trees). Causes white rot of wood. It can be found on a wide variety of species, both deciduous and coniferous, in forests, gardens and parks, both on dead wood and fallen trees, and on boards, and even on wood chips and sawdust. Even straw bales wrapped in plastic film are mentioned as rare substrates. The period of active growth in temperate climates is from mid-summer to late autumn. Dried fruit bodies are well preserved until next year. It is found on every continent except Antarctica and is perhaps the most widely distributed fungus.

In Europe and America, common slit-leaf is considered inedible due to its hard texture. However, it is not poisonous and is used as food in China, a number of countries in Africa and Southeast Asia, as well as in Latin America, and studies in the Philippines have shown that the common slit leaf can be cultivated.