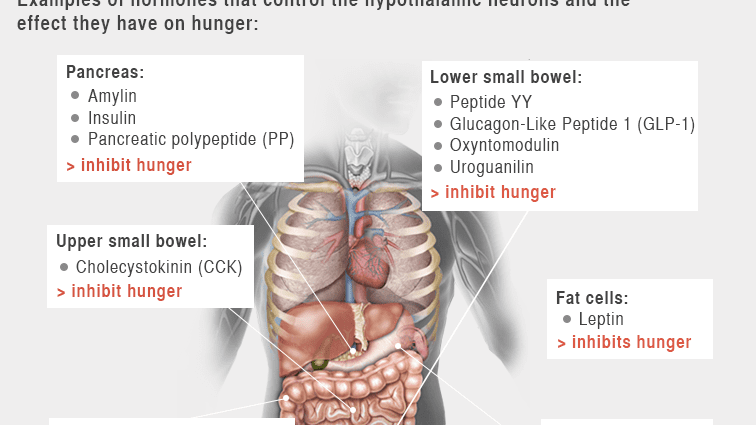 Hunger is defined as the feeling of the need for food. However, this sensation does not always develop during times of malnutrition. People with eating disorders may or may not be hungry after a meal. It is reliably known that over the past 50 years, the number of calories consumed by a person has increased by 100-400 kcal per day. People began to eat more processed food and move less. Obesity has become a global problem, and hunger control is a topical issue in dietetics.

The mechanisms of hunger development are more complex than it might seem at first glance. The feeling of hunger and satiety occurs in the hypothalamus. There is a so-called food center. It has two sections – one signals the need for food, the other is responsible for the feeling of satiety (calorizer). Roughly speaking, we feel hungry with our heads, where signals are sent from the stomach and intestines through nerve impulses and blood.

Entering the gastrointestinal tract, food begins to be digested and absorbed, absorbed into the bloodstream. If we compare the blood of a hungry and a well-fed person, then in the latter it is more saturated with digestive products. The hypothalamus is sensitive to changes in blood composition. For example, we may experience hunger when our blood sugar drops below normal.

Hunger is of several types: physiological, psychological, forced and starvation.

Physiological hunger is born in the stomach. It occurs when there is a lack of food in the form of gradually increasing discomfort. The sensation can be described by the words “rumbling in the stomach”, “sucking in the stomach.” Many overweight people do not wait for this moment, satisfying food cravings earlier. This kind of hunger can be tolerated. For example, when you feel hungry on the road, you do not try to satisfy it, but agree with yourself that you will eat upon arrival.

Psychological hunger cannot be felt in the stomach, it is born in the head and has no connection with the feeling of satiety. It can be felt after eating or at the sight of food temptation. Emotions get in the way of enduring psychological hunger. They also interfere with determining the arrival of saturation. That is, a person cannot understand that he has enough. Some people overeat to the point of cramps or a feeling of fullness in the stomach. Psychological hunger can occur for certain foods. Then people say they are addicted to them. After eating, the person experiences embarrassment, guilt, or shame. On a diet, people often satisfy psychological hunger with other foods. For example, a strong craving for chocolate appeared, and the person suppressed it by eating a kilogram of low-fat cottage cheese. This does not change the essence – the psychological hunger was satisfied with another product.

Forced hunger is capable of engulfing a group of people. History knows many examples. The last outbreak of mass hunger was recorded in 2011 in East Africa, where 50-100 thousand people died from starvation. This phenomenon can be economic, political, religious or violent. The hungry themselves do not have sufficient resources to meet their food needs.

Fasting is voluntary. It can be absolute – a person does not eat at all, or relative – he is undernourished. Fasting is also called a condition of the body resulting from a lack of nutrients. It is known that without food a person can live for a maximum of two months. If some types of relative fasting, like fasting days or religious fasts, can bring some benefit to the body, then long-term fasting affects the psyche, changes the functioning of internal organs, reduces the function of the immune system and should be stopped immediately.

How to deal with hunger

Forced mass hunger is a global problem of mankind, and voluntary starvation belongs to the class of medical problems. We cannot solve them, but we are able to control physiological and psychological hunger.

Controlling physiological hunger is key to weight loss. To make losing weight more comfortable, you must:

Having provided all the conditions for controlling physiological hunger, it is necessary to take care of the psychological one. This will help:

Feeling hungry brings discomfort. It is perfectly normal to experience mild discomfort while losing weight and calorie intake (calorizator). When the discomfort becomes unbearable, relapses occur. Do your best to increase your comfort level, because the more convenient the diet, the less harm it brings to health and the easier it gets.

2021-05-05
Previous Post: What to take for a picnic for losing weight
Next Post: How to diversify the diet menu