The risks of carrageenan (this food additive) 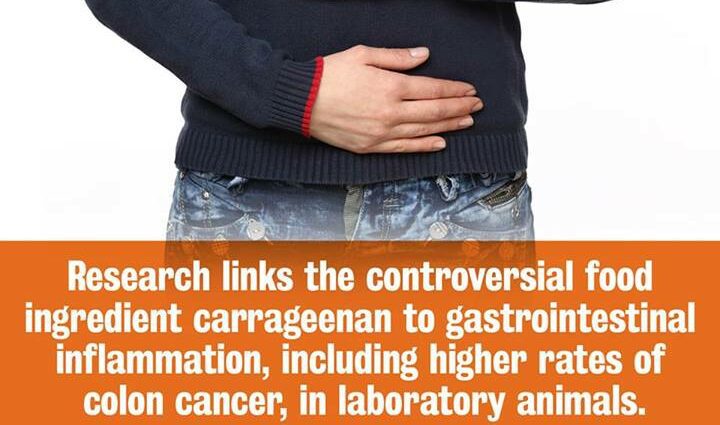 Carrageenan is used, among other things, in the food industry and in the pharmaceutical industry. It is an extract of red algae that was initially considered safe.

but it is increasingly criticized for the illnesses that result from its long-term consumption.

Find out in this article all about this food additive, what food regulatory bodies think, the products that contain it and all the risks of carrageenan.

Carrageenan is a food additive that is used to increase the volume of low-fat or diet products without increasing the nutritional value (1).

This ingredient can be a gelling agent, a stabilizer or an emulsifier. It serves, in principle, to improve the texture of foods to make them smoother and more consistent.

As a reminder, the consumption rate of carrageenan has increased from 5 to 7% per year since 1973 due to the increase in population and that of economic growth.

Carrageenan comes from the red algae called “carrageenan”. This algae is mainly found off Brittany.

In addition to the plants in great demand and used today which come from South America, the region of Brittany is the main producer of the powder found in small quantities in various culinary foods in France.

Why was it considered a product sure?

This seaweed extract has long been used as a safe one. It is even used to treat bronchitis, tuberculosis, coughs.

The problem really arises with food products. Indeed, the safest product can become a dangerous agent when consumed in excess.

Action of carrageenan in your body

Chemists believe that the consumption of small amounts of carrageenan has no effect on the stomach. However, taken in large amounts and on a regular basis, carrageenan brings more water to the intestines, hence its laxative effect.

Since we consume carrageenan in excess, because it is found in almost all consumer products, certain allergies inevitably result.

As some organisms are more sensitive than others, the side effects of carrageenan are multiple. Their degree of severity also differs from person to person.

Some people who have suppressed the consumption of frozen meals and the like; have seen their health greatly improved.

Carrageenan has been pointed out in several types of cancers and several digestive problems.

Here is a list of some foods that contain the additive carrageenan:

The packaged products may not mention the addition of carrageenan or the manufacturers may replace it with locust bean gum recognizing the dangers of this food additive.

In this case, the best and healthiest solution is to indulge yourself by preparing easy-to-prepare recipes yourself.

In pharmaceutical and healthcare products

Carrageenan is used in:

In France carrageenan is even used to treat peptic ulcers

The debate on the harmful effects of food additives is not new.

Mention may be made, for example, of the use of the artificial sweetener splenda of sucralose on human health, an ingredient which may be associated with the disease of diabetes or else leukemia.

Regarding the specific case of carrageenan, the discussion started half a century ago.

The viewpoint of the Joint FAO / WHO Expert Committee

In principle, it is a food addition which plays several roles in the consumable products manufactured, in particular as a thickener.

The additive carrageenan is on the “generally recognized as safe” list (3).

According to this recommendation, this ingredient should no longer be included among those used for the preparation of baby food. This is to avoid negative effects in infants.

Indeed, the intestinal wall of children would be the main vulnerable target of this additive.

That of the International Agency for Research on Cancer

For the International Agency for Research on Cancer, a branch of the World Health Organization (WHO); Carrageenan is a potential human carcinogen toxicant, particularly that of worsening breast cancer.

The chemical structure of this ingredient extracted from red algae itself is considered by the medical profession to be a very threatening toxic invader for humans.

Moreover, the latter has always notified for a long time that more than 100 inflammatory human diseases are inseparable from a large daily and repeated consumption of this additive substance.

Thus, the consumption of this food addition classified under the code E407 is an essential source of digestive diseases, according to successive studies carried out by scientists.

As additional information, degraded carrageenans, that is to say in low doses and native are classified 2B called “possibly carcinogenic for humans” and 3 classified “unclassifiable as to its carcinogenic to humans. »With toxic risks and cancer, particularly gastrointestinal by the International Agency for Research on Cancer.

The point of view of the European Union

The European Union only authorizes its use at a dose reduced to 300 mg / kg in certain foods for young children such as jams, jellies and marmalades, dehydrated milks, pasteurized creams and fermented cream products.

From a general point of view, carrageenans have a direct impact on the reproduction of lymphocytes.

They disrupt the major role that white blood cells play in destroying foreign bodies such as bacteria or in creating antibodies.

However, food carrageenan is found in almost all of human daily recipes called organic and conventional such as desserts, ice creams, creams, condensed milk, sauces, pates and industrial meats or even beer. and sodas.

In general, the food ingredient E407 can be presented in two aspects: first, there is the one with a higher molecular weight which is most often found in foods.

As for the second which has the shape of a smaller molecule, it is this which divides the opinions of the ones and the others; and which above all frightens researchers.

A debate for decades

For the record, it has been demonstrated by the numerous scientific studies which have followed one another, on several occasions in the 1960s, 1970s and 1980s that the health danger really exists with the consumption of products derived from carrageenan (4).

A priori, the amount of carrageenan present in many food products is more than sufficient to mainly cause gastrointestinal inflammation, ulceration or even malignant tumors.

This is the point of view of Dr. Joanne Tobacman MD, associate professor of clinical medicine at the University of Illinois at Chicago.

Fortunately, this red algae extract is being tested in research today to see how anti-inflammatory drugs work.

In this line of thought, perhaps it is important to know that carrageenan is not limited to just food additives.

It is also found in many non-food products such as beauty products, toothpaste, paints or even air fresheners.

The Institute of Food Control in the United States (the US Food and Drug Administration) recognizes the impact of carrageenan in the various studies carried out.

Since carrageenan has carcinogenic properties, she recommends reducing this substance.

But the problem is, we don’t really know how much carrageenan we are consuming per day. In fact, this additive is found in all manufactured food products.

More and more in the United States family reunions are developing to buy their products directly from local farms.

Which is at least safe and healthy, unlike products sold in supermarkets.

Moreover, several consumer associations have signed millions of petitions so that carrageenan is excluded from the manufacture of products.

According to the information in our presence, in 2016 the consumer associations won their case.

Use in the medical field

From a health perspective, medical researchers and doctors are currently focusing on collecting data to better understand the link between carrageenan, diet and gastrointestinal disease.

Carrageenan is used today as a microbicide against sexually transmitted infections.

Indeed, research from the American Laboratory of Cellular Oncology at the National Carrageenan Institute in Bethesda, Maryland has shown this antiviral aspect of red algae.

Another guide to organic and conventional foods with and without the E407 additive is also offered by the Cornucopia Institute.

The real headache for the majority of consumers is the difficulty in deciphering the names of food additives which are always presented by numerical codes.

Indeed, many people are unable to know the list of ingredients that they swallow.

It is precisely with a view to helping people better understand the codified figures of finished products, for example, that Gouget Corinne released “Dangerous food additives: the essential guide to stop poisoning yourself” in May 2012.

In this book, the author who has more than 12 years of experience in the sector of the toxicity of food additives including 2 years devoted to the comparison of various international studies on the field, tells you everything you need to know about unknown ingredients written on the packaging.

Thus, there will be no more secrets or at least the mystery of the unsaid labeled on consumable products sold will be dispelled by providing you with this guide book (6).

As knowing the aliases of food additives is already a step forward with possession of the guide book, it is only natural for consumers who experience symptoms such as abdominal distension, diarrhea or stomach cramps to have the first instinct to stop touching foods that contain carrageenan by reading the labels of manufactured products.

As it was mentioned before, there are several types of carrageenan. They differ in their properties and their chemical structure, hence the existence of the three mixtures of iota, kappa and lambda.

In general, the first two genera iota and kappa are the most used in cooking recipes. In any case, the recommended limit dose for each use is 2 to 10 grams per kilo.

From this perspective, one of the aspects of this food additive derived from red algae is that it is insoluble in cold water.

To make the dispersion of carrageenans easy, it is recommended to dissolve this ingredient in a small volume of boiling water and then transfer it before using them in the culinary preparation.

In addition, another very effective trick to control the powder of the E407 in fine and gradual rain is the use of a mixture by hand.

It would be wise for everyone who suffers from such symptoms to avoid the diet that has any connection with the consumption of this ingredient from red algae.

As we advised you above, read the labels of the products carefully before buying them. Of course, it’s not easy to spend hours in supermarkets.

You can do this online from the comfort of your room. Also ask the manager of the supermarkets you frequent for the listing of the products you buy.

It is with great pleasure that we unveiled the dangers of carrageenan, this food additive.

2021-10-15
Previous Post: 15 natural and powerful laxatives against constipation
Next Post: The slimming and sweat belt: is it really effective? Our comparison – Happiness and health