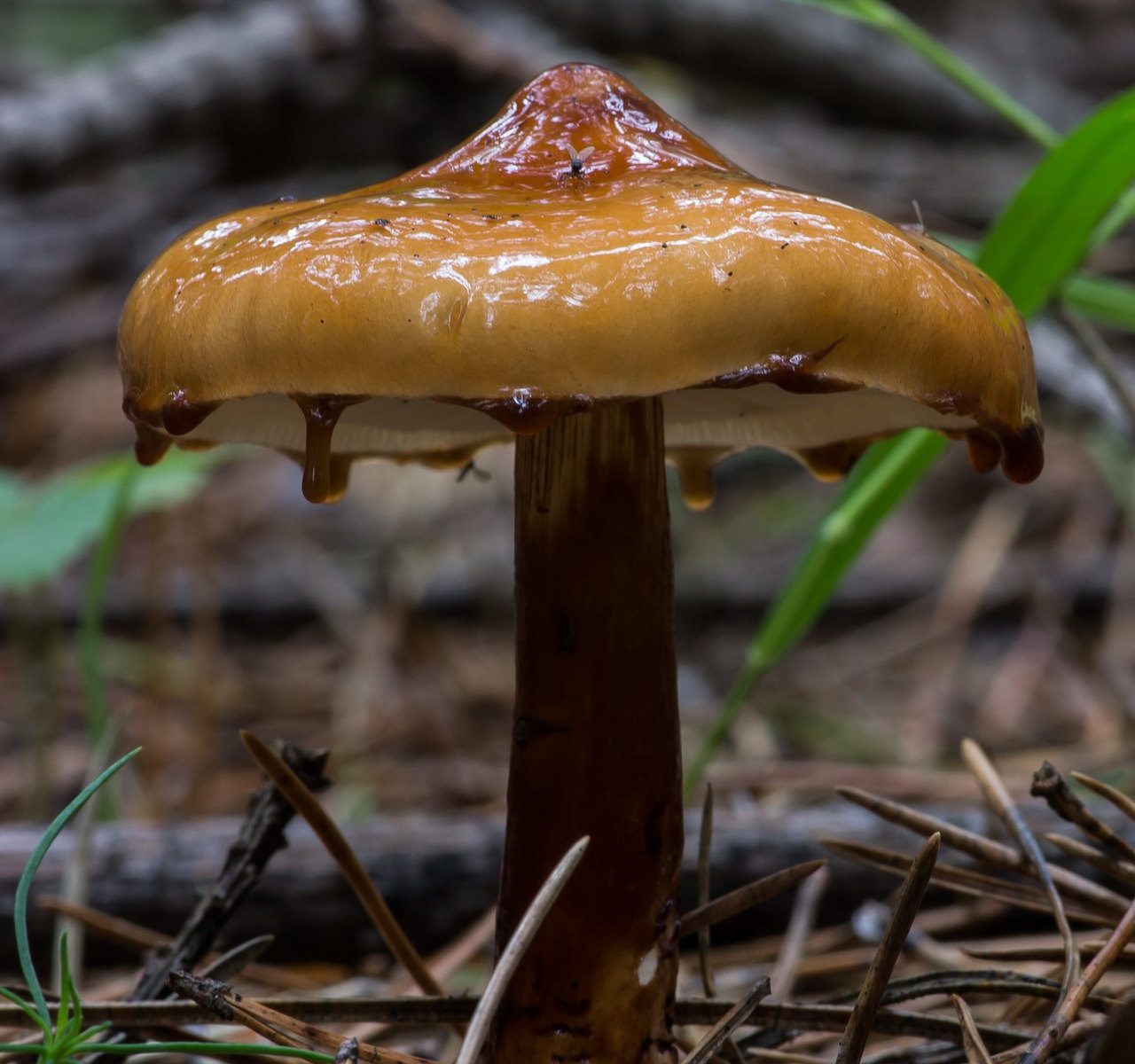 The mucus-covered leg of sticky limacella will require a certain skill from the mushroom picker: the stem is so slippery from mucus that it is difficult to grab it with your fingers. Fortunately, it is the abundant slime on the stem, in addition to the reddish-brown cap, that is an important factor in identifying the species. The mucus can be wiped off, it is reddish-brown in color, under it the leg is much lighter in color. The cap remains reddish-brown after removal of the mucus, at least in the center.

head: small, 2-3 centimeters in diameter, less often – up to 4 centimeters, convex or almost prostrate with a well-defined low central tubercle. The cap margin is very weakly curved, not striped or with implicitly expressed stripes in places, here and there, slightly convex, hanging over the ends of the plates by about 1 ± mm.

The flesh of the cap is white or whitish, with a dark line above the plates.

The surface of the cap of Limacella sticky is abundantly covered with mucus, especially in young mushrooms in wet weather. The mucus is clear, reddish-brown.

The skin of the cap under the mucus is pale brownish to reddish brown, darker in the center. Over time, the hat discolors a little, fades

plates: free or adherent with a tiny tooth, frequent. From white to pale yellowish, creamy in color (with the exception of sometimes monochromatic areas with mucus of the cap at the very edge of the cap). Seen from the side, they are pale and watery, as if soaked in water, or whitish near the edge and pale yellowish to pale rufous white near the context. Convex, 5 mm wide and of proportional thickness, with a slightly uneven wavy edge. The plates are of different sizes, very abundant and somewhat unevenly distributed.

Leg: 3-7 cm long and 2,5-6 mm thick, rarely up to 1 cm. More or less even, central, cylindrical, sometimes slightly narrowed at the top.

Covered with reddish-brown sticky mucus, especially abundant below the annular zone, in the middle part of the leg. There is almost no mucus above the annular zone. This mucus, or gluten, can often be patchy, streaky, later visible as red-brown fibrils.

Under the mucus, the surface is whitish, relatively smooth. The base of the stem is without thickening, light, often decorated with white threads of mycelium.

The flesh in the stem is firm, white below, whitish, above – with thin longitudinal watery streaks, and sometimes with a reddish tint near the surface of the stem. 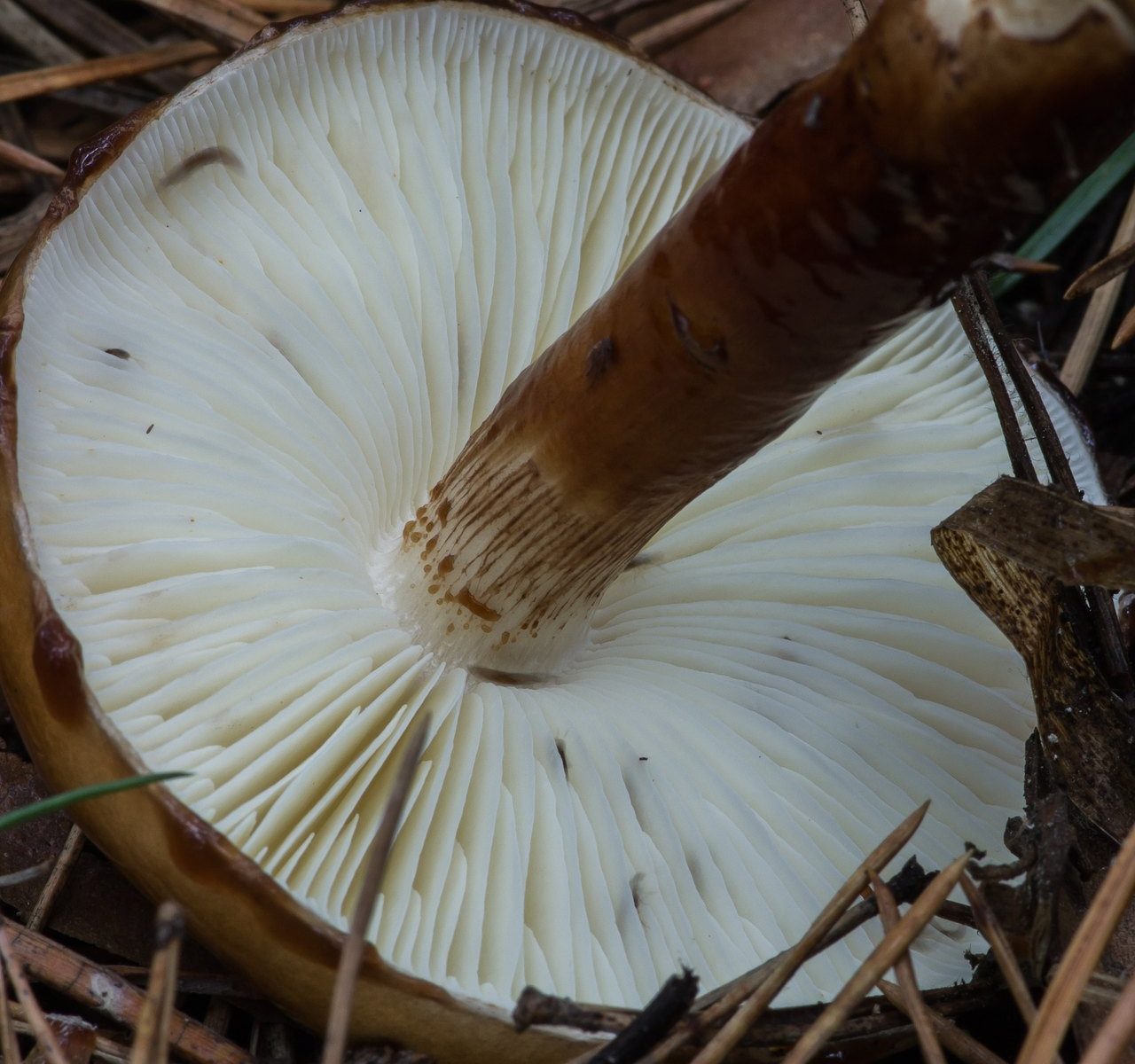 Ring: there is no pronounced ring. There is a mucous “annular zone”, more clearly visible in young mushrooms. In very young specimens, the plates are covered with a mucous transparent film.

Smell and taste: mealy. A specialized website for amanite describes the smell in more detail: pharmacy, medicinal or slightly unpleasant, quite strong, especially the smell intensifies when the hat is “cleaned” (it is not specified whether it is cleared of mucus or skin).

Mycorrhizal or saprobic, grows alone or in small groups in forests of various types, under deciduous or coniferous trees. Occurs very rarely.

There are no exact distribution data. It is known that confirmed finds of Limacella sticky were in North America.

Unknown. There is no data on toxicity.

We will carefully place Limacella sticky in the category of “Inedible Mushrooms” and wait for reliable information on edibility.