How to cure a food allergy? 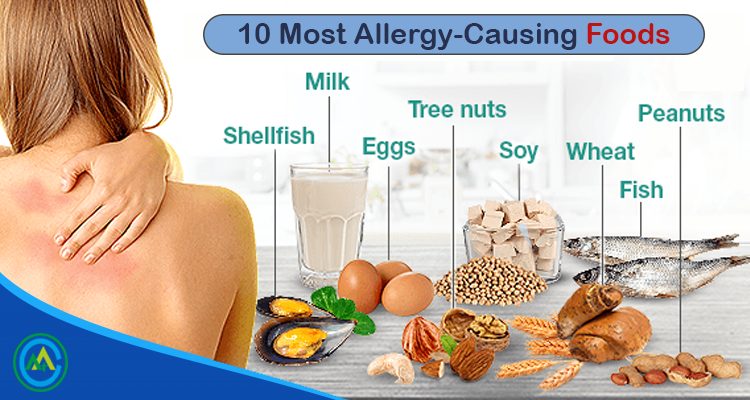 How to cure a food allergy?

In Europe, food allergies are thought to affect 6% of children and more than 3% of adults. Figures on the rise over the past ten years. How does a food allergy manifest? What are the main food allergens? Can we cure it? The answers of Dr Emmanuelle Rondeleux, pediatric allergist.

What is a food allergy?

Food allergy is a reaction of the immune system to a food to which it should not normally react. On first contact with the allergen, the body makes antibodies against it, IgE (for immunoglobulin E). These antibodies then attach themselves to mast cells, cells which participate in the body’s defense.

“Children who are allergic to peanuts or eggs can develop an allergy when they have never eaten them. It is enough that their parents have consumed it. They then carry traces of the allergen on their hands, their clothes which can then come into contact with the baby, which is enough to trigger the secretion of antibodies, ”explains Dr Rondeleux.

What are the main food allergens?

In children, the main allergens are cow’s milk, eggs, peanuts, nuts (“especially pistachios and cashews”, underlines the allergist), followed by mustard, fish and seafood, sesame, wheat or even kiwi. “Note that this list of allergenic foods varies from one country to another”.

In adults, the main allergens are raw fruits and vegetables, fish and seafood, soy, celery, mustard and gluten. “The onset of a food allergy in adults is often linked to cross-allergies. An adult person allergic to birch pollen is at risk of developing an allergy to apple because these two substances have common proteins ”, notes Dr Rondeleux.

Today, regulations require the mention of allergens (among a list of 14 major allergens) on the labeling of food products.

What are the symptoms of food allergy?

There are two types of food allergy:

Immediate allergies, the symptoms of which appear at most three hours after ingestion of the food. They can manifest as tingling and itching in the mouth, and / or edema of the lip and possibly the face in adults. In children, there may also be tingling and edema of the face, but also redness and especially hives of the face which can spread over the whole body. To this can be added respiratory discomfort and difficulty swallowing.

Immediate allergies can also result in digestive problems such as vomiting, diarrhea, abdominal pain and feeling unwell or even fainting. Anaphylaxis is the most serious form of immediate allergy. “We speak of anaphylaxis when two organs are affected”, points out the specialist.

Delayed allergies whose symptoms appear a few hours to more than 48 hours after ingestion of the allergenic food. They concern children more than adults and are characterized by digestive disorders (diarrhea, stomach aches, reflux), eczema and / or poor weight gain (stagnant weight).

“A food allergy that begins in adulthood most often results in an oral syndrome of lesser severity. In children, food allergy should be monitored more closely because it is potentially serious ”, warns the allergist.

What to do in the event of an allergy attack?

In case of mild symptoms

If the symptoms are mild, especially on the skin, they can be alleviated by taking an antihistamine medication such as Zyrtec or Aerius, in the form of an oral solution for children. In the event of respiratory discomfort, ventoline can be used as a first-line treatment, but you should not hesitate to resort to the epinephrine pen if the symptoms persist.

In case of discomfort or breathing difficulties

If the person in crisis feels unwell or complains of severe breathing difficulties, call 15 and immediately put them in a seated position (in case of difficulty breathing) or in a safety lateral position (PLS) with the legs raised (in case of discomfort).

These symptoms should suggest anaphylaxis which requires appropriate emergency treatment: intramuscular injection of adrenaline and hospitalization. Patients who have had anaphylaxis in the past should always carry a dose of auto-injectable epinephrine with them.

Diagnosis and treatment of food allergy

“The diagnosis of a food allergy is essentially based on questioning the patient or his parents if it is a young child. In general, parents who take the step of consulting for their child already suspect a food ”, notes Dr. Rondeleux. Blood tests and skin tests (prick tests) may also be prescribed in addition to confirm the allergy and rule out cross allergies.

“For example, in children allergic to cow’s milk proteins and whose allergy does not pass around 1 or 2 years, we can try to introduce cow’s milk in the form of a well-baked cake because the cooking facilitates the assimilation of cow’s milk proteins by the body. Same thing for people allergic to egg, we introduce the egg in cooked forms (hard-boiled egg, omelet) rather than in raw forms (soft-boiled egg, chocolate mousse) ”, details the allergist.

How does a food allergy evolve?

In children, some food allergies may disappear with age and others may persist. We note that the allergy to cow’s milk proteins disappears in 80% of cases around the age of one to two years. Egg allergy heals on its own around the age of three in 60% of affected children. On the other hand, allergies to peanuts, oilseeds, fish and / or crustaceans disappear much less frequently.

An increase in food allergies?

Overall, there has been an increase in food allergies for several years, with food allergies that persist more readily over time. Some scientists put forward the hygienic hypothesis to explain this phenomenon, a theory according to which the reduction of exposure at an early age to infections and microbial components in industrialized countries would lead to a decrease in the stimulation of the immune system and therefore an increase in the number of people with allergies.

What about cross allergies?

When a person is allergic to two or three different substances, it is called cross-allergies. This is because the allergens in question have common proteins.

The most famous cross-allergies are:

2021-08-26
Previous Post: 5 emotions that dogs are capable of experiencing
Next Post: The sight of children threatened by screens

Mammoth Rescue Mission: Rare forest elephants escaped death at the hands of farmers after they trampled on their crops

Vegetarian Dating: Finding a Life Partner Who Shares Your Diet