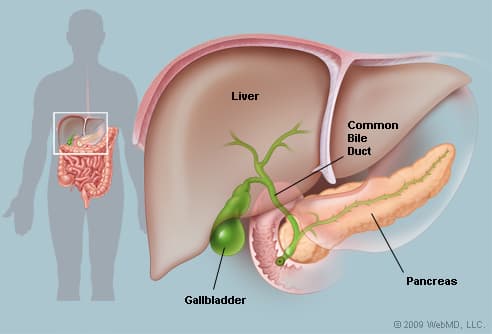 The gallbladder (from Latin vesica biliaris) acts as a storage place for bile, a viscous yellow liquid secreted by the liver and which is involved in the digestion process.

Anatomy of the gallbladder

The gallbladder is located on the right side of the abdomen. It is a small pear-shaped pouch found on the underside of the liver. Green in color and with a thin wall, it measures on average 7 to 12 cm long. It contains on average 50 mL of bile. At its lower end, the cystic duct joins the common hepatic duct to form the common bile duct. It is through this duct that the bile flows into the duodenum, the first segment of the small intestine which follows the stomach.

Physiology of the gallbladder

Bile contains in particular water, bile salts, bilirubin (pigment resulting from the degradation of hemoglobin and which gives the bile its greenish yellow color), cholesterol and phospholipids. Only bile salts and phospholipids participate in the digestion process. Although it does not contain enzymes, bile is able, thanks to its salts, to reduce the size of fat globules, and therefore to facilitate the action of digestive enzymes.

The behavior of the gallbladder is dependent on the condition of the duodenum. When this is empty, the bile flows back into the cystic duct to be stored in the gallbladder. The latter then concentrates the bile by partially absorbing its water, thus making the future action of bile salts more effective. When fatty foods enter the duodenum, the secretion of cholecystokinin, a hormone produced by the intestine, causes the gallbladder to contract, which then ejects the bile into the common bile duct. The latter is joined at the entrance to the duodenum by the pancreatic duct (as its name suggests coming from the pancreas), which carries digestive enzymes, to constitute the hepato-pancreatic bulb. Once in the small intestine, the bile and pancreatic juice start the chemical breakdown of food.

Biliary lithiasis : formation of stones inside the gallbladder or within the bile ducts. These stones, similar to small pebbles, are mainly composed of crystallized cholesterol. Their shape, size and number vary from person to person. Although they are generally benign, these stones can obstruct the cystic and common bile ducts, and therefore the exit of bile to the duodenum. In this case, the subject has biliary colic which can last up to 4 hours.

Small gallstones have the effect of slowing the flow of bile which will then stagnate until it forms what is called bile sludge, which is also found in some people with AIDS (3).

A 4 study (2001) made it possible to identify genes of susceptibility to lithiasis in mice, thus suggesting a possible genetic origin to this pathology. In addition, certain ethnic groups, such as the Indians of North America, seem to be more vulnerable to lithiasis.

At any age, obesity is also an increased risk factor for the development of gallstones. In a 5 study (2012) of 510 individuals aged 000 to 9, it was found that overweight children were twice as likely to suffer from gallstones, while the risk was eight times higher for gallstones. subjects with severe obesity.

In general, women are more exposed than men to these gallstones. Certain behaviors can increase the risk of developing stones.

Cholecystitis : inflammation of the gallbladder, which may be accompanied by infection. It usually occurs because of the presence of stones in the gallbladder or common bile duct.

Porcelain vesicle : after cholecystitis, calcium can get attached to the walls of the gallbladder, which harden. The subject then has a so-called porcelain vesicle.

Cholestatic jaundice : When the ducts of the gallbladder are blocked, bile flows back into the blood. As bilirubin is no longer excreted in the stool, it becomes colorless, while the skin turns slightly yellow. At the same time, the urinary bilirubin level increases, which results in darker urine. These are the symptoms of cholestatic jaundice.

Choledochal cysts : are abnormal swellings of the bile ducts. Disease present from birth, it increases the risk of developing gallbladder cancer.

Abnormal pancreatic-biliary junction : congenital anomaly of the junction between the common bile and pancreatic ducts. In this case, the enzymes produced by the pancreas cannot reach the duodenum. They can then cause irritation of the gallbladder.

Gallbladder cancer : As with cholecystitis, the appearance of carcinoma of the gallbladder is favored by gallstones. A rare pathology in France, it mainly affects women over the age of 70. Usually detected late when it spreads to neighboring organs, it is sometimes accompanied by abdominal pain, vomiting and loss of appetite. Ethnic factors must be taken into account to assess its incidence. Exposure to Thorotrast (9) (a contrast medium formerly used in medical imaging) also increases the risk of developing gallbladder cancer.

When the stones are not calcified and do not exceed a certain size, treatment to dissolve them, such as Actigall, is possible. Ablation, which has no real impact on a daily basis, remains the norm in cases of gallstones.

Diet can influence the formation of gallstones. A high calorie diet tends to promote their appearance, while a diet rich in vegetable fibers decreases this percentage. In the event of the first appearance of stones, a lifestyle adjustment (reduction in the consumption of fat, sugar, good hydration, regular physical activity, etc.) can quickly relieve any pain.

Certain bowel diseases, such as Crohn’s disease, can double or even triple the prevalence of gallstones (10).

Ultrasound of the abdomen: the easiest and fastest exam to identify gallstones. It can detect 90% of calculations. It is associated with biological examinations (blood test and bilirubin analysis) in order to estimate the seriousness of the situation.

Echo-endoscopy: this twenty-minute examination allows you to observe the inside of the gallbladder and to study the pancreas in addition.

Gallbladder removal (or cholecystectomy): Surgery that can be done to treat gallstones of the gallbladder or common bile duct when associated with severe pain.

In Antiquity, Galen developed the theory of the four humors (11) according to which the balance of humors (blood, yellow bile, black bile, phlegm) governs the mental and bodily health of an individual. The yellow marble is associated with anger, while the black bile evokes melancholy and sadness. The latter was, in the minds, responsible for worries and evils. It is from this Greek theory that the expression “to have bile” (12) comes.