Eternal Siesta: 10 popular dishes of Spain that are worth trying 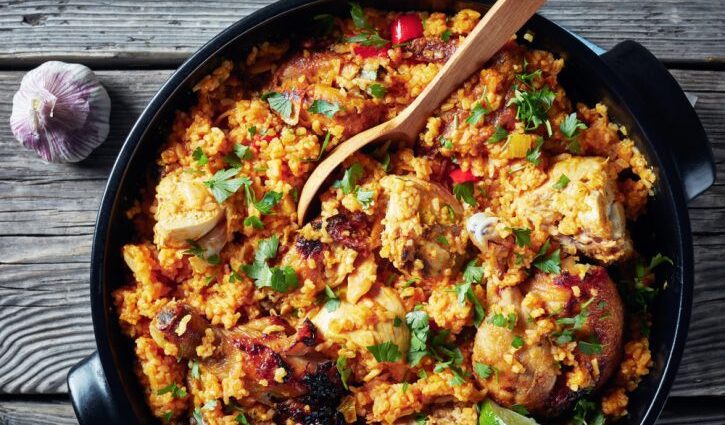 Spanish cuisine is one of the most vibrant and multifaceted in the world. It is not surprising, because it has absorbed the culinary traditions of 17 different regions, each of which is unique in its own way. The main foods in the national menu are beans, vegetables, rice, some meat and seafood, olive oil and, of course, jamon and wine. The most popular Spanish dishes are prepared from these ingredients.

Tomatoes on an ice floe

Spaniards have a special passion for cold soups. Salmorejo is one of them. It is prepared from fresh fleshy tomatoes and a small amount of stale homemade bread, and is served not just chilled, but with pieces of ice.

We cut the bread into slices, cut off the crusts, chop the crumb into cubes, fill it with chilled water. Remove the skin from the tomatoes, remove the seeds, puree and mix with the soaked bread. Add crushed garlic, olive oil, salt and pepper to taste. Whisk everything into a thick mass and put it in the refrigerator for a couple of hours. We will cook hard-boiled eggs in advance. Pour the salmorejo on plates, decorate with chopped boiled egg and jamon. On a particularly hot day, you can pour a little crushed ice into the soup.

Improvisation in a saucepan

Spaniards are also not indifferent to hot soups. For example, in Andalusian cuisine, the hallmark is puchero — a cross between soup and stew.

Pour cold water over the meat and cook for an hour with the addition of salt and spices. Also, we boil chickpeas and corn in advance. We filter the meat broth, and we disassemble the veal into fibers. Coarsely chop corn, carrots, potatoes and pepper. Bring the broth to a boil, lay the meat with all the vegetables and legumes, cook for 10 minutes, insist under the lid. We put veal with vegetables on plates, pour a little broth and decorate each portion with chopped herbs.

But still, among the popular Spanish recipes, the first number is tapas-a snack for one bite. How many varieties of it exist, even the Spaniards themselves will not say. In this capacity, you can serve olives, green peppers, assorted cheese, fried potatoes with aioli sauce, canapes or mini sandwiches. Usually tapas are served on a large platter with sherry, sparkling cava wine or beer. Here are a couple of traditional variations.

We cut the chorizo sausage with thick washers, and the sheep’s cheese-cubes. We put cheese, olives and sausage on a skewer. Or such a concise version. Sprinkle a piece of bread with olive oil, put the thinnest slice of jamon and fix the cherry tomato on top with a skewer.

🚀More on topic:  Voice. Children: 7 of the brightest participants in the show

Experienced gourmets assure that the most delicious fish dishes are prepared in the Basque Country. The first thing they recommend is to try the cod pil-pil. Its highlight is a specially prepared sauce based on olive oil.

We cut the garlic into thin plates, and the pepper-rings. In a deep frying pan, heat the olive oil and fry the garlic and pepper until softened. We pour everything into a separate container. In the same pan, we heat up a little more oil, brown the portion pieces of fish, put them on a plate. Gradually pour the oil with garlic and pepper back into the pan, stirring in a circular motion. It will begin to thicken and acquire a greenish tint. The sauce will be ready when the consistency is close to the mayonnaise. That’s when we spread the cod and simmer until ready. We serve the pil-pil, pouring the sauce with garlic slices.

What the Spaniards do not cook from vegetables! One of the most favorite variations is the pisto mancheto stew. According to legend, it was invented in the homeland of Don Quixote, in the La Mancha region. It is prepared from any seasonal vegetables, and served with a fried egg.

Zucchini, eggplant, onion and peppers are cut into small cubes. Sprinkle the eggplants with salt, leave for 10 minutes, then lightly squeeze with your hands. We pass the garlic through the press. Tomatoes are scalded with boiling water and remove the skin.

Heat a frying pan with olive oil, pass the onion and garlic until transparent. Pour out the pepper, fry until softened. Next, add the zucchini and eggplant, continue to fry, stirring occasionally with a spatula. At the end, we put tomatoes and tomato paste. Season everything with salt, sugar and spices. Pour in a little water, reduce the flame to a minimum and simmer the stew under the lid for 15-20 minutes. During this time, we will fry the eggs. Each serving of vegetable stew is supplemented with fried eggs and slices of jamon.

Paella embodies the whole Spanish cuisine. However, it is unlikely to be possible to find a classic recipe. In different regions of the country, meat and seafood, poultry and rabbit, duck and snails can easily meet in one plate with rice. We offer a recipe originally from Valencia-paella with seafood.

🚀More on topic:  How to properly practice doggy style?

In advance, we boil the tentacles of squid and mussels. Remember, the wings of the mussels should open. With the flat side of the knife, we crush the garlic, throw it into a preheated frying pan with oil, stand for a couple of minutes so that it gives off the aroma, and immediately remove it. Here we lightly brown the peeled shrimp and put it on a plate. Remove the skin from the tomatoes, rub through a sieve, pour into the pan where the shrimp were. Simmer the tomato puree on low heat for 3-4 minutes with the addition of chili pepper rings. Pour in a glass of broth, bring to a boil and pour out the rice. As it boils, add the remaining broth. It will take about 20 minutes to cook the rice. A couple of minutes before the end, we season it with salt and spices, and also lay all the seafood. Let the paella brew under the lid and sprinkle with fresh herbs.

Spaniards will compete with any European nation for the title of the main sweet tooth in their part of the continent. One of the desserts that can bring them victory is quaresma, which strongly resembles our donuts.

Soak the raisins in the liqueur for half an hour. We heat the milk in a saucepan, melt the butter and gradually add flour. Constantly stir the mixture with a wooden spatula so that there are no lumps. One by one, we introduce all the eggs, continuing to stir. Then we put salt, dried raisins and the zest of half a lemon, knead the dough. Heat the pan with oil well and use a spoon to lower small portions of the dough into the boiling oil. They will take the form of balls and quickly brown. Fry the balls in small batches and spread them on paper napkins. Before serving, sprinkle the hot quarezhma with powdered sugar.

Residents of sunny Majorca start the morning with lush ensaimadas buns. They are baked from an airy layered dough, and various fillings are put inside. Most often it is pumpkin jam, melted chocolate, Catalan cream or apricot jam.

We heat the milk a little, dilute the sugar, flour and yeast. Add the remaining flour with salt, egg and olive oil. Knead a soft, slightly sticky dough, cover with a towel and put it away in the heat for half an hour. We pour a little flour on the table, spread the dough, grind it and divide it into 4 lumps. We give them to stay warm for 20 minutes.

🚀More on topic:  How different zodiac signs are cleaned at home

We roll out each lump as thinly as possible and lubricate it with lard. Spread the jam with a wide strip on the edge, roll the dough into a tube, wrap it with a dense snail. We also grease the buns with lard on top and send them to the oven at 190 °C for 20 minutes. While the ensaimadas have not cooled down, sprinkle them with powdered sugar.

Spanish drinks are a separate story. Take at least orchatu. It is prepared from ground almonds of chufa with the addition of water and sugar.  According to legend, the name of the drink was invented by King Jaime when he passed one of the villages of Valencia. To the question of the distinguished guest, what was served to him, he received the answer-chufa milk. To which the king exclaimed: “This is not milk, this is gold!” For an adapted recipe, you can take any nuts.

Fill the nuts with water, insist all night. Then we drain the water, and chop the nuts with a blender until they turn into a thick homogeneous mass. We filter it through several layers of gauze. Add sugar to the resulting milk and stir well. Before serving, put a little lemon zest in each glass, and sprinkle the orcata itself with cinnamon.

Perhaps the most popular Spanish drink is sangria. It is prepared from two basic ingredients: chilled wine and fruit. The wine can be red, white or sparkling. Fruits — which ones you like best. Some people prefer to splash a little rum, liqueur or brandy. No strict proportions need to be observed, everything is at your discretion. We offer you to try sangria in three variations at once.

All fruits and berries are thoroughly washed and wiped dry. We cut them arbitrarily together with the peel in small pieces. We put the assorted fruit in three jugs, sprinkle with sugar, pour a little water. In the first jug we pour white wine, in the second — red, in the third — pink. We put everything in the refrigerator for a couple of hours. Pour the sangria with pieces of fruit into glasses and garnish with mint.

That’s what it is, Spanish cuisine. Of course, this is just a grain of her immense culinary heritage. You will find more interesting recipes in the thematic section of the website “Healthy Food Near Me”. How do you feel about Spanish cuisine? Do you have any favorite dishes? We will be glad if you tell us in the comments what you have tried and share your impressions.

2021-07-26
Previous Post: Vitamins from the forest: what is useful for birch sap
Next Post: Game: Catch a fish for dinner!