Champagne (sparkling wine), produced from one or several grape varieties, double fermentation in the bottle. This drink’s invention took place thanks to Abbey’s French monk of Pierre Perignon from the champagne region.

The proximity to Paris and several important historical events played an important role in developing the Champagne region. In Champagne’s capital, Reims, in 496, the first Frankish king Clovis and his army converted to Christianity. And yes, local wine was a part of the ceremony. Then in 816, Louis the Pious got his crown in Reims, and after 35 more kings followed his example. This fact helped the local wine to acquire a festive flavor and royal status.

Champagne winemaking developed, as in many other regions, thanks to monasteries that grew grapes for sacred rites and their own needs. Interestingly, in the Middle Ages, Champagne wines were not sparkling at all but quiet. Moreover, people considered flashing as a defect.

The notorious bubbles appeared in wine quite by accident. The fact is that fermentation in the cellar often stopped due to low temperatures (yeast can only work at a specific temperature). Since in the Middle Ages, wine knowledge was extremely scarce, winemakers thought that the wine was ready, poured it into barrels, and sent it to customers. Once in a warm place, the wine began to ferment again. As you know, during the fermentation process, carbon dioxide releases, which, under the condition of a closed barrel, could not escape and dissolved in the wine. So the wine became sparkling.

What exactly is Champagne?

France legislated in 1909 the right to call sparkling wine “Champagne” and the method of its manufacture. So that wine could have the name “Champagne,” it must meet individual requirements and standards. Firstly, production must take place in the champagne region. Secondly, you can use only the grape varieties Pinot Meunier, Pinot Noir, and Chardonnay. Thirdly – you can use only the unique technology of manufacturing.

Similar drinks produced in other countries may have only the name – “wine produced by the champagne method.” Manufacturers who call sparkling wine “Шампанское” with Cyrillic letters do not violate the copyright of France.

15 Things You Didn't Know About Champagne

For the production of champagne, the grapes are harvested immature. At this time, it contains more acid than sugar. Next, the harvested grapes are squeezed, and the resulting juice is poured into wooden barrels or steel cubes for the fermentation process. To remove any excess acid, “base wines” are blended with other wines of different vineyards and aged several years. The resulting wine blend is bottled, and they also add sugar and yeast. Bottle сorked and placed in a cellar in a horizontal position.

With this production method of all selected carbon dioxide during fermentation dissolves in the wine, the pressure on the bottles’ walls reaches 6 bar. Traditionally used for champagne bottles 750 ml (Standard) and 1500 ml (Magnum). For the separation of muddy sediment, the wine is 12 months initially daily rotate by a small angle until the bottle is upside down, and the whole deposit will be there. Next, they uncork the bottle, drain the precipitate, add the sugar in wine, dissolve and re-cork. Then the wine is aged for another three months and sold. More expensive champagnes can be aged no less than 3 to 8 years.

Today in the champagne region, there are about 19 thousand manufacturers.

The very creation of this drink is shrouded in many myths. The central legend says that champagne was invented in the 17th century by Pierre Perignon, a monk of the Benedictine Abbey of Auville. His phrase “I drink the stars” refers specifically to champagne. But according to wine historians, Perignon did not invent this drink, but quite the opposite was looking for ways to overcome the wine bubbles. Nevertheless, he credited with another merit – the improvement of the art of assemblage.

The legend of Pierre Perignon is much more popular than the story of the English scientist Christopher Merret. But it was he who, in 1662, presented the paper, where he described the process of secondary fermentation and manifested property of sparkling.

Since 1718, sparkling wines have been produced in Champagne on an ongoing basis but has not yet been wildly popular. In 1729, sparkling wines appeared in the first house of Ruinart, followed by other famous brands. Champagne’s success came with the development of glass production: if earlier bottles often exploded in cellars, this problem has practically disappeared with durable glass. From the beginning of the 19th to the beginning of the 20th century, Champagne jumped from the production mark of 300 thousand to 25 million bottles!

Champagne is divided into several types depending on the exposure, color, and sugar content.

Due to the aging, champagne is:

Color champagne is divided into white, red, and pink.

According to the etiquette rules, champagne should be served in a tall thin glass filled with 2/3 and cooled to a temperature of 6-8°C. The Bubbles in fine champagne occur on the glass walls, and the process of their formation can last up to 20 hours. When you open the champagne bottle, you need to ensure that the air outlet formed soft cotton and the wine left in the bottle. This should be done calmly, without any haste.

As an appetizer for champagne may be fresh fruit, desserts, and canapés with caviar.

Champagne is credited with many beneficial properties. So its use relieves stress and calms the nerves. The polyphenols contained in champagne improves cerebral blood circulation, lowers blood pressure, and improves digestion.

In some France hospitals, a small amount of champagne to give to pregnant women to ease childbirth and raise forces. In the first days after birth, it is recommended to drink to strengthen the body, improve appetite and sleep.

The antibacterial properties of champagne have a beneficial effect on the skin; after a skin mask, it becomes supple and fresh.

Scientists claim that the Pinot Noir and Pinot Meunier grapes used to make champagne combine trace elements that positively affect brain function. According to Professor Jeremy Spencer, drinking one or three glasses a week will help improve memory and prevent degenerative brain diseases such as dementia, for example.

2. Has a positive effect on the work of the heart

Nutrition experts believe that champagne should be part of the diet. The sparkling drink contains fewer calories and less sugar than wine, but the bubbles also create a feeling of fullness.

Scientists at Oxford University found that the level of alcohol in the blood of those who drank champagne was higher than those who drank wine. Thus, to become drunk, a person needs less alcohol. Nevertheless, the effect of intoxication lasts much less than any other alcoholic drink.

According to dermatologists, champagne is rich in antioxidants that have a positive effect on skin health. What’s more, drinking champagne regularly will help even out skin tone and alleviate oily skin and acne problems.

The harm of champagne and contraindications 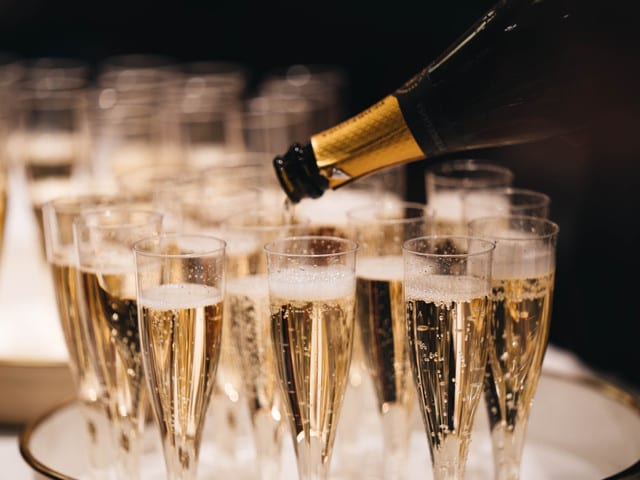