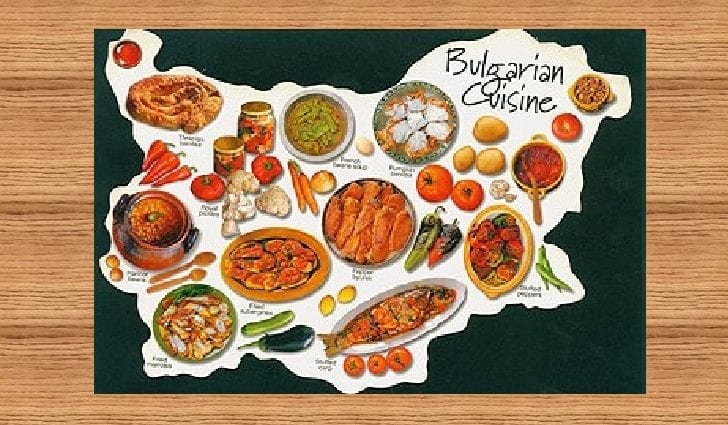 According to experts, the Bulgarian cuisine is very similar to the folk-peasant cuisine with Turkish and Greek notes, and this is due to the history of this people. It so happened that he himself was under the Ottoman yoke for more than five centuries. Later, the enemy was defeated, but his culinary traditions unwittingly remained. Moreover, some of the recipes of those times have survived to this day and have become a kind of visiting card for Bulgaria.

The first mentions of food products that were common on the territory of this country date back to the II-I millennium BC. e. It was then that the Thracians lived here, who were engaged in agriculture (growing wheat, barley, fruits, vegetables, grapes) and cattle breeding (breeding horses and sheep). Every now and then they had clashes with their neighbors, as a result of which there was an unchanging process of the formation of the state itself.

Perhaps the longest time Bulgaria was under the rule of the Ottoman Empire. As a result, her cuisine has turned into a kind of mix of Balkan and Eastern culinary traditions and has only become better and richer. Simply because dishes with Turkish, Armenian, Greek, and finally, Arab roots have appeared in it. Slightly modified and improved, they not only live in the Bulgarian cuisine today, but are very popular with both locals and tourists.

For a long time, Bulgarian cuisine was surrounded by incredibly vibrant neighbors: Greek, Balkan and Turkish. But, the most interesting thing is that she managed to preserve her originality, which today is recognized in each of the traditional Bulgarian dishes offered to tourists. Among them:

Shopska salad. A dish of tomatoes, feta cheese, sweet peppers, cucumbers and onions, which is considered the “visiting card” of this country.

Cold soup tarator. The same soup made from cucumbers, crushed walnuts and garlic with the addition of sour milk. Interestingly, the latter here is not much like the usual sour milk and is incredibly tasty. Therefore, when visiting Bulgaria, you should definitely try its national soup.

Tutmanik is a puff pastry pie stuffed with meat and feta cheese.

Mekitsa is a flat cake made from fried dough.

Banitsa is a puff pastry pie with feta cheese, eggs or other filling such as pumpkin and sugar, spinach, rice, cabbage and onions. Its highlight is that the layers themselves are stacked in a spiral or in layers. Sometimes milk can be added to the dough, then the banitsa turns into an appetizing dessert, resembling curly buns in appearance.

Bob chorba is a delicious bean soup, which is prepared, respectively, from white beans and vegetables such as tomato, carrot, pepper, onion, spices. Sometimes bacon or sausage can be added to it. Most often it is served on Christmas Eve.

Gyuvech is essentially a meat stew that is baked in a clay pot in an oven. In fact, there are many recipes for Gyuvech, according to which different types of meat (lamb, rabbit, beef, pork) and favorite vegetables are added to it.

Sarmi is a traditional summer dish made from a stew with fried rice and onions and served in wrapped grape leaves, less commonly cabbage. The same dish with Turkish roots.

Chushki fired with oriz, or stuffed dried peppers. The filling can be different types of meat or rice with spices.

Kapama is the highlight of Southwestern Bulgaria. This is a dish, the cooking process of which takes 5 hours. It is made from sauerkraut, different types of meat and sausages. There are a lot of recipes, but the most popular one recommends preparing the filling, wrapping it in cabbage leaves and baking it in white wine under the dough.

Patatnik is a pie with potatoes, cheese and meat.

Barbecue or shish kebab is an original dish, which is a whole lamb roasted on a skewer.

Bulgarian cuisine is rich, interesting and very healthy. Simply because it is based on vegetables. In addition, the locals cannot imagine their life without fermented milk products, the need to consume which all doctors assert. They also insist on the benefits of red wines in moderation. And Bulgaria was famous for them even in antiquity.

Perhaps these and other factors allowed it to become useful, as evidenced by the average life expectancy of its inhabitants. Today she is 74 years and 5 months.