Black, red, white: the most complete guide to caviar 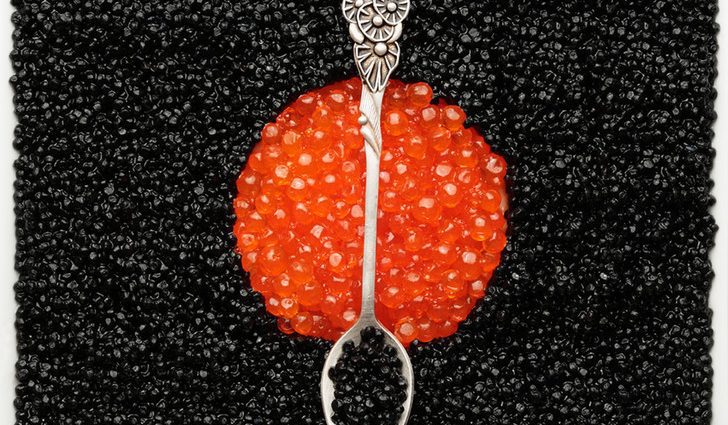 We tell you what you need to know about caviar, its varieties and taste in order to choose the perfect addition to any dish.

The benefits and harms of caviar

Processed and salted fish eggs of various species are a delicious delicacy that is usually eaten with bread, pancakes, decorate salads or add them to various snacks. It is known that caviar improves brain activity, strengthens the immune system and the cardiovascular system, and also has a positive effect on the quality of vision and is indicated for pregnant women. Caviar has a unique set of active substances, containing easily digestible iodine, phosphorus, iron, potassium, folic acid, polyunsaturated fatty acids, vitamins A, D and E. By the way, caviar is a rich source of rapidly digestible protein, the quality of which can compete with meat.

The only thing is that it is better not to use caviar for people with a tendency to edema and with atherosclerosis, hypertension and ischemic diseases. The reason is salt, which is contained in large volumes in the delicacy. You can find all the varieties of caviar at Lemberg.

Conventionally, all types of caviar can be divided into three categories that characterize the product according to the family of fish, as well as the method of fishing. Caviar of different fish, even belonging to the same species, may vary in taste, color and size. It is also worth highlighting the caviar of some mollusks, as well as grape snails and cuttlefish.

A type of caviar that is considered one of the most expensive and valuable in the world. Beluga caviar leads not only in terms of cost, but also in terms of nutritional value and taste, for which gourmets appreciate it so much. It has a nutty flavor and, contrary to popular belief, does not smell of fish at all. It is believed that the most delicious beluga caviar is the one that has a golden hue and was obtained from almost a hundred-year-old fish. Naturally, the cost of such a delicacy is off scale and can reach €7,000 per kilogram.

It should be distinguished from caviar of bowfin fish, which looks very similar in appearance, and therefore it is often passed off as classic black caviar from fish of the sturgeon family. Recognizing a “fake” is not as difficult as it seems. Firstly, it will be distinguished by a price that will be implausibly lower. Secondly, the taste, it will be coarser and “easier”.

Unlike beluga caviar, sturgeon caviar is much less popular, and also has a much lower price. It has a very specific taste, marine and even iodized. Some say that sturgeon caviar has an algae flavor. However, it is precisely for this unusual, unlike anything taste that caviar is valued.

By the way, among the advantages of sturgeon caviar is its light saltiness. To reveal a rich and unusual taste, during pickling, the brine is made less strong than, say, when preparing beluga caviar.

The circle of elite caviar is closed by stellate sturgeon, which is slightly inferior to its more expensive counterparts in value and taste. The only thing she leads in is the amount of fat in the composition. Sevruga caviar is very high in calories and is contraindicated in losing weight. However, if you are not on a diet and can afford too much, you will like the subtle but memorable taste of caviar. Compared to sturgeon, it seems much less pronounced, but, believe me, this does not make it any worse.

Like sturgeon, sterlet caviar has a pronounced marine taste, which, however, is much softer. However, in general, such caviar is more specific due to a strong fishy aftertaste. Of all sturgeons, sturgeon caviar is the cheapest, which, of course, does not make it less tasty. As they say, there are no comrades for the taste and color, therefore, among gourmets you can find fans of this variety of caviar.

To taste, this caviar is somewhat similar to beluga caviar, but only with a less pronounced taste and a nutty tint. In addition, in terms of fat content and calorie content, it is significantly ahead of its counterpart, but it is these qualities that make it so tender and soft.

If you see familiar red caviar on the counter, then in most cases it will be pink salmon caviar. It has become widespread due to its bright and pleasant taste, as well as the high fecundity of this fish, which allows the product to be produced in large quantities. Thanks to its universal taste – not too fishy, ​​but at the same time recognizable, it won the favor of the masses. When buying, it is also worth considering that pink salmon caviar is often salted, so it is better to purchase it from trusted sellers.

The fattest of all types of red caviar. Meanwhile, it is precisely due to its calorie content that chum caviar has a delicate and pleasant oily taste, which, however, is not liked by everyone. It is mined in much smaller volumes than pink salmon caviar. This is due to the unpopularity of such caviar among consumers.

Such caviar is considered the most useful among all varieties of red caviar due to the excellent composition of active substances. However, despite these advantages, coho salmon caviar has not found much popularity among consumers. As for the taste, it is quite specific and has a noticeable bitterness, because of which many do not like it.

In the Russian market, sockeye salmon caviar is not so common, since in our country it is not particularly loved because of its pronounced fishy taste. It is also interesting that it is precisely because of this specific feature that it is extremely popular in Europe and America, where such an unusual flavor shade for us is considered delicacy and gourmet.

Trout caviar is quite salty and has a noticeable bitterness, which is why it is rather unpopular among consumers. Meanwhile, it goes well with cream cheeses and many other fermented milk products, which is why it is often used in the preparation of rolls and other snacks with an abundance of soft and non-aggressive in taste products.

One of the most popular varieties of partial caviar. Pike caviar is much cheaper than all those varieties that we have described earlier. However, for all its cheapness, with the right salting, it can be extremely tasty and in no way inferior to its more expensive and sophisticated neighbors on the store shelf. In addition, pike caviar is very useful and recommended for people with low hemoglobin.

An extremely popular variety of partial caviar, which is presented on a large scale on the shelves of our stores. It is useful to know that pollock roe is not only rich in various useful trace elements, but also low in calories. In appearance, it resembles white paste and has a specific and very recognizable taste.

In terms of its nutritional and taste properties, cod caviar is not inferior to many noble types of caviar. It has a delicate taste and practically does not have a fishy tint. It is often used in the preparation of salads, snacks, and it also goes well with bread and all kinds of vegetables. Cod eggs are very small and have a peach color.

Capelin caviar has a very unusual, sharp and not the most unambiguous taste, so it is practically not used in its “pure” form. However, it can often be found in stores in the form of a paste: capelin caviar is mixed with various oils or mayonnaise and sold in small glass jars. Be sure to add spices to the pasta, which shade, and sometimes muffle the specific taste. Often you can also find smoked capelin caviar.

This caviar has a delicate pink color and a watery texture. It is impossible to call zander caviar gourmet or valuable, but despite this, it still enjoys popularity and love among consumers. Let’s face it, the low cost of this product is largely the reason for good demand. When buying pike perch caviar, it is worth remembering that it is likely to contain a large amount of vegetable oil, which may affect its taste. Especially if the caviar was produced quite a long time ago.

Bream caviar is one of the few that can be eaten raw. It has a golden color, and the eggs themselves are small and crumbly. Fans advise eating bream caviar as an independent snack, but it will also look great in sandwiches, as well as fried as part of pancakes.

Flying fish roe is rarely eaten as a wealthy food. Much more often it can be found in sushi or rolls. It is convenient to use such caviar to decorate dishes, tinting with various food dyes. Meanwhile, it could be an ideal dietary food product due to its low calorie content and high content of easily digestible protein.

2022-09-29
Previous Post: How Vitamin D can Support a Healthy Immune System
Next Post: How to lose weight before marriage? How to take care of your dream figure? |

Hashimoto’s disease: how to help yourself

22 most vegan cities in the world