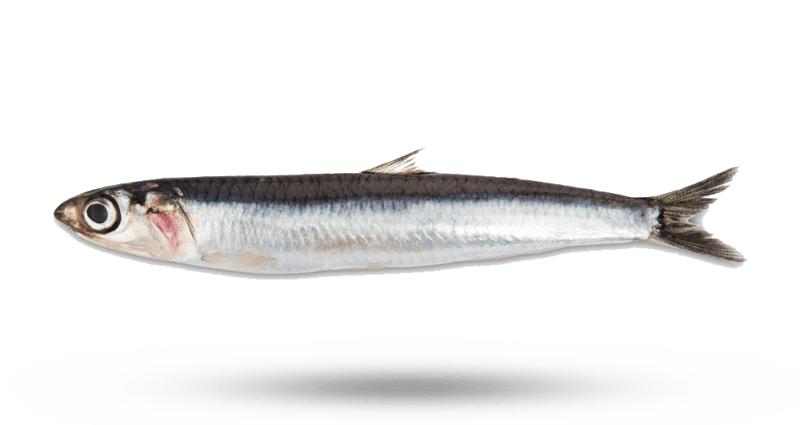 Anchovies are small fish that belong to the herring order. There is another name that is more familiar to many – hamsa. There are about 15 varieties in total. The fish body is long and on average reaches about 15 cm and is colored gray-blue. The head is flattened from the sides, and the mouth is disproportionate and large.

Anchovies live in large flocks away from the coast. You can meet this fish in both hemispheres. Life expectancy is no more than 4 years. This type of fish spreads quickly enough. The anchovies are canned, which allows them to be stored for 2 years and transported over long distances.

In some countries, a large number of anchovies are used in industry for the preparation of semi-finished products, fish meal, fertilizer, and also as bait for other more valuable fish.

Where are they found and how are they caught?

This question can be heard both from people who are just stepping on a long journey of learning culinary skills, and from experienced chefs. The latter often do not think about it and simply use delicious fish to prepare masterpieces, as they say, out of nothing. Let’s take a look at this issue.

So, the genus of the anchovy family has fifteen species of fish that live everywhere in the waters of the oceans and most seas. Depending on the area, anchovies have slight external differences and differ slightly in taste. The most famous fish species live in the Mediterranean Sea, as well as in the Black and Azov seas. And besides these subspecies in the world are widely used:

Due to its small size, the fish gets lost in schools and this is how it migrates in the underwater kingdom. This pushes people to the commercial catch. And this activity is very productive due to the large size of the flocks and the wide distribution of anchovies. Usually the catch is carried out in late summer or early autumn, when the fish enters relatively shallow water. Anchovy prefers warm water, and in the cold season goes to the south of the seas and sinks to a depth of more than eighty meters.

Anchovies are caught using special purse seines or a pelagic trawl with a fine mesh of nets. Thus, a one-time catch of fish can be impressive volumes, and as a result, the cost of catching is quite low due to minimal costs. The price on the shelves is also reasonable.

Catching large quantities of anchovies in the last century created a situation where fishing was completely prohibited. Over time, when the population of this fish was restored in natural conditions (after all, it is impractical to breed this type of fish in the conditions of fish farms), the official catch was resumed and even somewhat increased its volume. Now this fish is available on fish shelves and is sold out very quickly.

“Anchovies, sprat, hamsa – what’s the difference?” – you think and start looking for information on the Internet and in special literature. Let’s try to systematize our knowledge so that we don’t have to spend time looking for an answer to this question.

So, all these types of fish are far from the same thing. Although the Black Sea hamsa is sometimes called anchovies, it is popularly called “black back”, but this is fundamentally wrong. Fish differ not only in appearance, but also in taste. Experienced chefs will tell you about this, who confidently declare that only from the meat of anchovies the most delicious and real sauces and seasonings are obtained, for which the cuisine of the Mediterranean countries is so famous.

Each of these fish is unique in its own way, but only anchovies are used in “high” cooking for various dishes. This will be discussed in the following sections of the article. The rest of the fish species (from the comparative table above) are used only as a protein supplement to unleavened dishes, although many different delicious and unusual dishes can also be prepared from them.

How to choose and store?

In order not to harm the body and purchase quality fish, you need to know some secrets on how to choose it correctly:

When choosing processed anchovies, opt for whole fish in brine, as they are larger and tastier than the oil option.

It is recommended to use fresh anchovies immediately, as during the storage period the fish loses its useful and taste qualities. The maximum storage time in the refrigerator is 4 days. If the anchovies are frozen, then the time increases to 90 days. When buying fish in jars, transfer it to a plastic container, fill it with vegetable oil and seal it with a lid. Put the jar in the refrigerator.

The beneficial properties of anchovies are due to the presence of a variety of vitamins and minerals. The protein contained in fish is almost as good as animal meat. The calorie content of the product is at an average level, so in small quantities, properly cooked fish can be consumed during the diet.

Anchovies contain vitamin A, which is essential for visual acuity and to improve metabolic rate. They have vitamin B1, which is necessary for the normal functioning of the heart, as well as the nervous system and digestion. Due to the presence of vitamin PP, the amount of cholesterol in the blood decreases, and it also takes part in the diffusion of oxygen throughout the body.

Given the presence of large amounts of potassium and sodium, the water balance is normalized, which in turn has a positive effect on the activity of the heart and kidneys, as well as the nervous system. There is phosphorus in anchovies, which takes part in the regeneration of bone tissue, and it also improves the condition of teeth and bones.

Due to the calcium content, muscle function improves, and this mineral is also necessary for bone tissue. Iron is part of the fish, which improves the condition of the blood and the process of hematopoiesis in general. It also contains fluorine, which stimulates immunity and iodine, which is necessary for the normal course of metabolic processes.

Anchovy meat contains a large amount of fish oil, which is used in pharmacology and cosmetology.

With what can be replaced at home?

Unfortunately, there is no real substitute for anchovies, especially when preparing sophisticated recipes such as spaghetti sauces or the popular salad called Nicoise. Such density of meat is not inherent in any fish of small breeds.

Although the ingenuity of our hostesses should be envied! Sometimes you can hear that the product is replaced by fillets of salted saury or Vietnamese (Thai) fish sauce, similar in taste to anchovies. But with the real taste of fish, these replacements are not comparable.

Harm of anchovy fish and contraindications

Anchovies can be harmful to people with individual intolerance to the product. There are no other contraindications to eating fresh fish. It is not recommended to eat salted anchovies in large quantities, since they have practically no beneficial properties, and salt also has the ability to retain liquid.

Anchovies are popular in the cuisine of many countries around the world. They are consumed fresh, as well as at home, they are salted, dried, smoked and pickled. They are used for cooking and heat treatment, so anchovies are boiled, fried, baked, deep-fried, etc. Many people like to stuff small carcasses with olives. Such fish can act as a central or additional ingredient in a dish.

Each country has its own ways of using anchovies, for example, in Italy it is used as a filling in pizza, and in Spain it is boiled, fried and used in different sauces. In France, anchovies are used as a filling for pies. Also, on the basis of such fish, snacks, pastas for sandwiches are made, and they are also added to salads, etc. It is also worth mentioning that anchovies are an irreplaceable ingredient in the popular and original Worcestershire sauce.

There are many ways to cook anchovies. This is due to the high nutritional value of the product and the taste of the meat of this fish. Culinary experts have found many ways to prepare anchovies and have created a large number of original dishes that have found their admirers in every corner of the globe. In our time, grocery stores can easily purchase various canned food and pickles made from this fish, unique in taste.

In view of the fact that in our regions it is easy to purchase anchovies chilled or frozen, we offer you several ways to prepare delicious preparations from them at home. For convenience, the options are summarized in subparagraphs. There is also additional information in the video below.

Canning anchovies is a simple process, but a little time consuming. Although, if you get used to it, then you can do it faster.
You will need fresh anchovies, preferably not previously frozen or, in extreme cases, frozen in a gentle way. Under industrial conditions, high-quality canned food from any fish is prepared directly at the place of catch, and, by the way, this is what you should always pay attention to when choosing finished products.

You will also need the following components:

Salting anchovies is no more difficult than cooking them in a marinade according to the recipe suggested above. This will be the so-called wet or regular fish salting. Of the listed ingredients, in addition to the fresh anchovies themselves, only salt and water are needed for such a salting. The brining time will also be similar to the pickling time.

But tastier, and also faster and more interesting, you can cook an amazing fish using the dry salting method. Ingredients are taken optionally, as they say, by eye, but experience has shown that the amount of salt is usually half the weight of the weight of the fish itself.

The cooking time for salted anchovies is only 24 hours (for medium salted fish).

So, in a deep, clean and dry container (a saucepan or a plastic container with a lid), pour a layer of coarse salt, and, if desired, add a bay leaf broken into small pieces.

Prepare anchovies in a separate bowl. To do this, generously sprinkle them with coarse salt and mix. The fish does not need to be infused, so we proceed to the next stage of cooking.

Gently place the anchovies in a container and cover the latter with a lid. We put it in the refrigerator and wait for the specified time. Before serving, rinse the fish, dry it on disposable towels and gut. Be sure to tear off the head of the fish, but the removal of the ridge remains at the discretion of the hostess.